The scion of TVS Motor has not only infused fresh thought and energy into the family business, he has also shown remarkable leadership traits 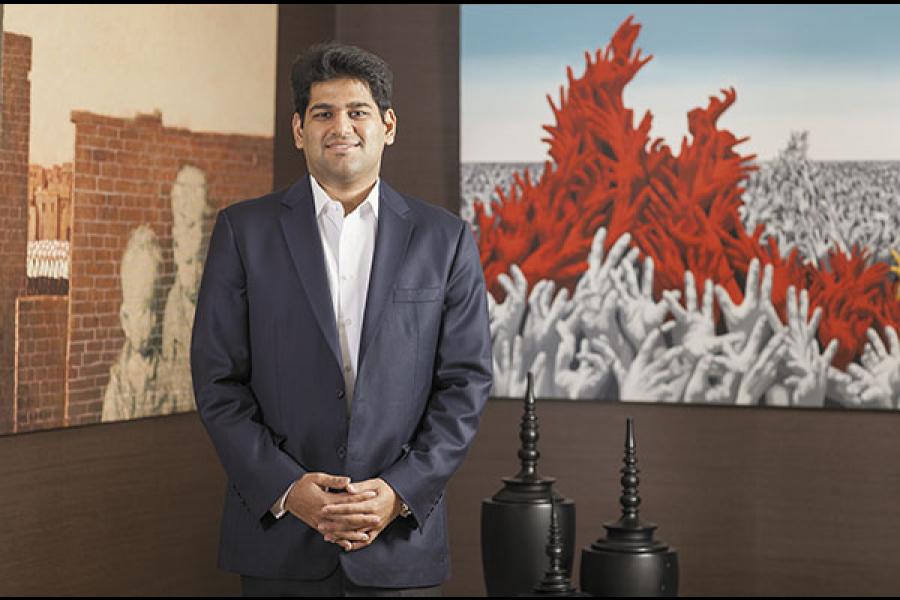 No, no, no! Not so aggressive!” That was the thought that flashed through Sudarshan Venu’s mind a second before he crashed. It was a pleasant day in late January and the 26-year-old deputy managing director of the Rs 10,300 crore (by revenues) TVS Motor Company was subjecting a bike developed by his organisation to multiple tests on the various turns and straights of the 3.7-kilometre Madras Motor Race Track in Irungattukottai near Chennai. He escaped unhurt, apart from a hit on the little finger of his right hand. It was still bandaged when Forbes India met him mid- February, for his first ever formal interaction with the media.

“The heart of any business is the product and you don’t get a feel of the product if you don’t test ride it,” Sudarshan says, explaining the incident. “It is important to know what the customer is getting from the bike and someone in a strategic role needs to get a first-hand experience of it.”

Born to successful business couple Venu Srinivasan, the chairman of TVS Motor, the third-largest two-wheeler player in the country, and Mallika Srinivasan, chairman and CEO of Tafe Ltd, India’s second-largest and the world’s third-biggest tractor maker (in volume terms), entrepreneurship caught Sudarshan’s interest fairly early in life. That he is a fourth-generation member of both the 105-year-old TVS Group and the 78-year-old Amalgamations Group (ranked 37th in the 2015 Forbes India Rich List) certainly helped.

There was no compromise on education, though. He completed the Jerome Fisher Program in Management & Technology at the University of Pennsylvania with honours (he finished the course in four years instead of the usual five); he followed that up with a master’s in Technology Management at Warwick Manufacturing Group (WMG), part of the University of Warwick in the UK. After that, it was straight to business. “We are entrepreneurs at heart and I was always interested in running a business,” he says.

Happily enough, Sudarshan is also an auto enthusiast. He particularly loves bikes. When he was a kid, his father had got a small bike made for him (like the erstwhile Bobby) with a TVS Scooty engine and he would ride it around the house all the time. Today he owns an Apache 200—from the TVS stable—and a BMW R1200R.

Combine the two passions—enterprise and bikes—and his career was almost pre-destined. In 2011, he joined TVS Motor as vice-president and immediately immersed himself in product development.

TVS Motor is a strong domestic player with a 13 percent market share and its bikes are known for their quality and reliability (back in 2002, it became the first company in the world to get the Deming Prize, the oldest and most widely recognised award in the world, considered a Nobel equivalent for quality).

As the young blood in the company, his focus is to “make the brand more aspirational”. He is working on that on multiple fronts. And the change is visible. The design of TVS bikes has become far more appealing: Take the example of TVS Jupiter, Victor and Apache 200. On the marketing front too, he has pushed for new advertisement campaigns that raise the aspirational quotient of the products. He has also been attracting and empowering younger talent into the company. “The seniors have taught me so much, especially when it comes to engineering and quality,” he says, adding very quickly, “A successful blend of youth and experience is what I am looking at.”

One of the biggest strategic moves in recent times, with a view to expansion of size and brand perception, has been TVS Motor’s decision, in 2013, to tie-up with BMW Motorrad for the manufacturing and selling of sub-500 cc bikes in India. TVS Motor has invested 20 million euros in this project which will leverage the strengths of the two partners—BMW’s platform and technology and TVS Motor’s market access and manufacturing prowess. Sudarshan, who is courteous to a fault, played a key role in realising this alliance, but he refuses to take the credit for it, emphasising instead on teamwork as key through the conversation. His goal is not self-aggrandisement: It is to create a company with the most satisfied customers.

“Since becoming a director at TVS Motor in 2013, Sudarshan Venu has seen two-wheeler sales grow by over 30 percent. He has successfully introduced exciting new products to the Indian market like the Apache and the new Victor, but not only that, he is also building strong relationships with international industry leaders, earning their trust and respect. This paves the way for significant future growth for TVS Motor in India and globally,” Ralf Speth, CEO, Jaguar Land Rover, tells Forbes India by email. “For example, Sudarshan quickly secured a joint venture with BMW, which has rapidly led to the India-made BMW G310R, but—crucially—also gives TVS an innovation-rich technology platform to support expansion into global markets.”

With his strengths, he could have broken out on his own. But that thought did not even cross his mind, Sudarshan says firmly. “What is the need when there is a solid business that has already been created?” Not that he is happy merely managing what is already there.

The entrepreneurial bug of creating something new has pushed him to “take advantage of emerging opportunities and catch new waves of wealth creation”. He spends considerable time at TVS Emerald which is engaged in building customer-focussed, trustworthy and aspirational homes for the middle class. “The idea to tap into middle class housing was already there, I am giving shape to it,” he says. TVS Emerald has already completed one project in Chennai (it was sold out before completion) and another one has been launched. “We will build scale over the next five years,” he adds. His other area of focus has been TVS Credit—a non-deposit taking NBFC, which offers loans for the purchase of two-wheelers, tractors and used cars. “We want to build a multi-product NBFC which would cater to our customer needs in various retail segments across the country… we expect to scale this business further by entering into newer segments in the next 12-18 months,” he says.

Even as he charts his own path within the family business, he acknowledges the role played by his parents: “They taught me entrepreneurship, values, the quality mindset, importance of customer satisfaction and commitment to the society,” he says. There have been other influences too—his mentors. Lord Kumar Bhattacharyya, chairman, WMG, is one of them; Sudarshan goes to Warwick whenever he feels the need for his inputs. “He exposed me to the global auto sector and helped me analyse international trends,” he says. Another person Sudarshan admires is Shashi Ruia, founder-chairman, Essar. “Mr Ruia is amazing in dealing with people and he taught me how to encourage and motivate a team to perform at peak level,” he says.

The admiration is mutual. “Great leaders are great learners. Sudarshan is an embodiment of these qualities. He is friendly and approachable. The humility and the willingness to learn backed by the values that he has inherited from his family make him a person to watch out for in the auto industry,” says Ruia.

Lord Bhattacharyya, too, is generous with his praise. “Like his father, Sudarshan is modest and humble… Don’t let the unassuming politeness fool you, though; he is focussed and clear-eyed about the need for technical innovation, consumer focus and global collaboration in business success,” he says. In a sense, he has figured out how to marry his drive to succeed with real thought for others. For evidence, consider this anecdote shared by Lord Bhattacharyya via email to Forbes India. “Sudarshan likes good coffee,” he writes, “and once he briefly chatted about this with the staff in my office who shared his enthusiasm. Many months later, when he was about to leave the WMG, he gave the office a coffee machine as a surprise thank you gift. This is one of the many times I have seen Sudarshan show the perceptiveness and attention to detail that generates real loyalty. It’s a rare trait and one that I believe will be a hallmark of his career.” And it is a reassuring sign for the future of his company.


Change Quotient
Sudarshan Venu is raising the aspirational quotient of the bikes TVS Motor manufactures through better design and marketing. He has entered into a tie-up with BMW Motorrad to produce sub-500 cc bikes. He is also looking at grabbing other opportunities of wealth creation such as affordable housing and expanding the finance business