The framework includes a global minimum tax of 15% that each country would adopt, and new rules that would force technology giants like Amazon and Facebook and other big global businesses to pay taxes in countries where their goods or services are sold, even if they have no physical presence there

By Alan Rappeport and Liz Alderman 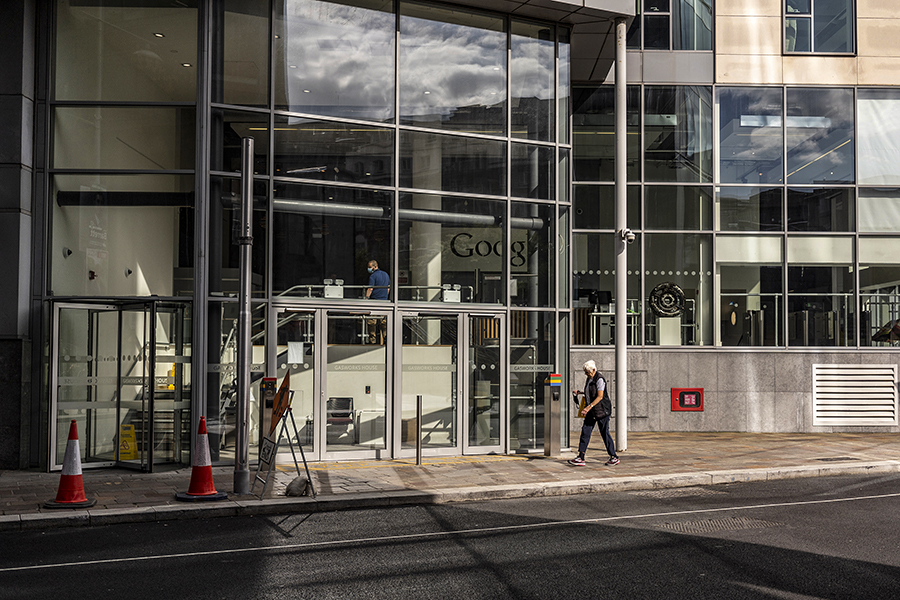 Google’s European headquarters in Dublin on July 5, 2021. The most sweeping overhaul of the international tax system in a century is poised to take a significant step forward this week, with nearly 140 countries, including Ireland, expected to settle on a 15 percent global minimum tax rate.
Image: Paulo Nunes dos Santos/The New York Times

WASHINGTON — The most sweeping overhaul of the international tax system in a century is poised to take a significant step forward this week, with nearly 140 countries, including Ireland and Estonia, expected to settle on a 15% global minimum tax rate.
Negotiators were on the brink of agreeing to the rate Thursday, before a Friday meeting at the Organization for Economic Cooperation and Development, which has been coordinating the global tax talks. The tax rate has been the subject of months of intense negotiations. If enacted, it could help end a decadeslong race to the bottom on corporate taxation that has allowed tax havens to flourish and has drained countries of revenue.
Governments have for years been discussing such a tax overhaul; the negotiations gained momentum this year under the Biden administration, which is also pursuing changes to its domestic corporate tax rate. The framework under consideration includes a global minimum tax of 15% that each country would adopt, and new rules that would force technology giants like Amazon and Facebook and other big global businesses to pay taxes in countries where their goods or services are sold, even if they have no physical presence there.
Before Friday’s meeting, negotiators have been grappling over the language of a joint statement describing the tax rate, exceptions for certain kinds of companies and the implementation period, which some nations want to be drawn out for years. European holdouts such as Ireland, Hungary and Estonia have been under intense pressure in recent months to join the agreement, which will require the approval of the 27 European Union countries.
After weeks of heated negotiations and pressure from the United States and France, Ireland, a main holdout to the deal, said it was ready to accept a 15% minimum tax rate after Prime Minister Michael Martin told the Irish Cabinet on Thursday that the rate would only apply to multinational giants like Facebook and Apple but not to Irish companies operating in Ireland.
“I do believe, where we are now is balanced and represents a fair compromise, reflecting the interests and input of the many countries involved in the negotiation,” Pascal Donohoe, Ireland’s finance minister, said Thursday.
At stake has been Ireland’s low official corporate tax rate of 12.5% and a tax system that has helped global companies based there avoid paying taxes to other countries where they make profits. This has put billions of euros into Ireland’s tax coffers and created hundreds of thousands of jobs.
Donohoe said small domestic companies with annual revenue of less than 750 million euros would be exempt from the higher tax, or 160,000 businesses in Ireland.
Estonia also signed on to the 15% rate Thursday, according to a post on Twitter by OECD Secretary-General Mathias Cormann.
People with knowledge of the negotiations said that while the 15% rate was essentially a done deal, some of the world’s biggest countries continued to battle for exemptions to dampen its impact on long-standing economic models that have helped draw investment and create jobs.
“I’m fully determined to pave the way for a consensus, because we are one millimeter away from a global agreement on a new international taxation system for the 21st century,” Bruno Le Maire, France’s finance minister, said on CNBC on Wednesday. “Of course there are some member states asking for a delay, asking for an implementation period, a transition period; we are totally open to that kind of proposals.”
Despite growing support for the agreement, concerns remain about how it will be enforced and if it will be enacted uniformly worldwide.
India, China, Estonia and Poland have said the minimum tax could harm their ability to attract investment with special lures like research and development credits and special economic zones that offer tax breaks to investors. China, for instance, has long used special economic zones with low tax rates to attract foreign investment, which has been a boon for its economic development.
The United States has been one of the deal’s most vocal supporters, but it also faces challenges ensuring that the Biden administration’s commitments are enacted by Congress. President Joe Biden’s economic agenda is in limbo, and Democrats are trying to figure out how to push through changes to the tax code that would ensure the United States is in compliance with the international agreement it is trying to broker.
The Treasury Department declined to comment on the details of the agreement, noting that the negotiations are ongoing, but expressed optimism that a deal would be finalized when the leaders of the Group of 20 leading industrial nations meet in Rome later this month.
Treasury Secretary Janet Yellen is “laser-focused on the progress being made to finalize what would be a historic deal and expects countries to coalesce around the final parameters of a new international tax regime,” said Alexandra LaManna, a Treasury spokesperson. She added that the deal would help create more jobs and investment in the United States and benefit workers.

Tweets by @forbesindia
The future farmers of France are tech savvy, and want weekends off
China's power crunch exposes tensions ahead of UN climate summit