China burns more fossil fuels than any other nation, making it the planet's top source of the greenhouse gases that are warming the earth and its voracious appetite for electricity is only growing

By Keith Bradsher and Lisa Friedman 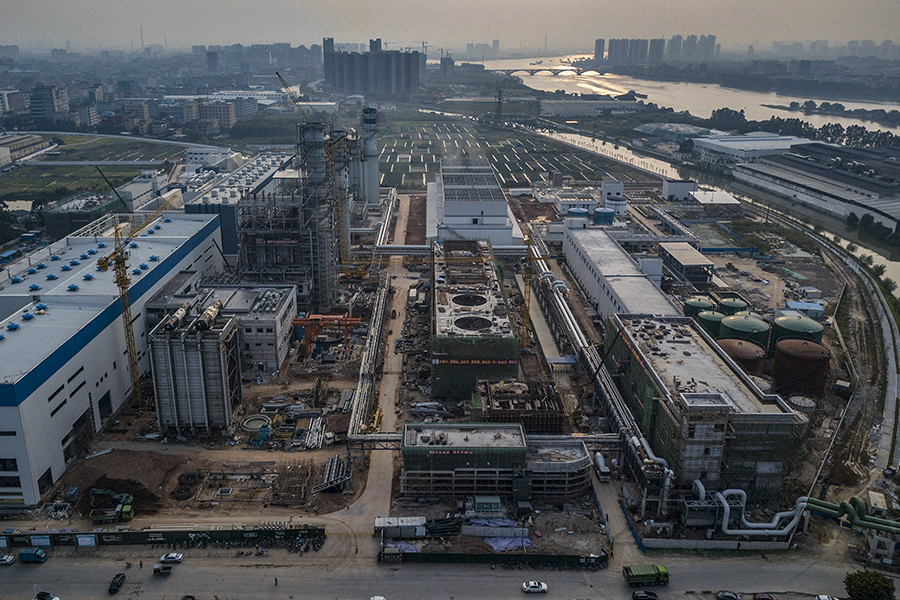 Construction on the Zhongtang gas-fired power plant in Dongguan, China, one of several new gas plants being built in the area to meet the country’s energy needs as it pivots from coal, Sept. 28, 2021. It’s one of several huge gas-fired plants being built to pump more electricity throughout this sprawling industrial city of about 10 million, where rising demand for power has led to rationing and blackouts that are now rippling across eastern China and threaten international supply chains.
Image: Gilles Sabrié/The New York Times

DONGGUAN, China — On the northern edge of a vast Chinese factory city, welding torches gleam as workers finish construction on a gas-fired power plant to replace one that burned coal and blanketed the surrounding neighborhood in a sooty pall.
It is one of several huge gas-fired plants being built to pump more electricity throughout this sprawling industrial city of about 10 million, where rising demand for power has led to rationing and blackouts that are now rippling across eastern China and threaten international supply chains.
This archipelago of power plants underlines an unsettling reality in the global fight to slow climate change. China burns more fossil fuels than any other nation, making it the planet’s top source of the greenhouse gases that are warming the Earth. And its voracious appetite for electricity is only growing.
Chinese President Xi Jinping has promised that his country will start reducing carbon dioxide and other gases generated by burning coal, gas and oil by 2030 and then stop adding them to the atmosphere altogether by 2060. But climate scientists warn that nations must make a sharp turn away from fossil fuels now in order to avert the most catastrophic consequences of climate change.
Just weeks before a critical U.N. climate summit in Glasgow, Scotland, attention is riveted on China and whether it will do more to cut emissions. The world’s top energy agency said last week that China “has the means and capacity” to reduce its pollution. Its actions could be consequential for the planet’s climate, already at a pivotal moment.
“We want to see ambition from China,” said Alok Sharma, a member of the U.K. Parliament who is overseeing the international climate negotiations. “China is responsible for almost a quarter of all global emissions right now. And they are going to be a critical part of making sure that we get success.”
China has taken some important steps this year to begin to curb its use of coal, the dirtiest of fossil fuels. In April, Xi vowed that China would “strictly control coal-fired power generation projects.” He added that the country would reach peak coal consumption by 2025 and then reduce it over the following five years.
Following Xi’s promise, local governments slowed approvals for new coal power projects within China, after a big surge in 2020. Some provinces, like coastal Shandong, mandated over the summer that some of their oldest, least efficient coal-fired plants be closed.
In September, Xi announced at the United Nations that China would stop financing new coal power plants in other countries. Several U.S. experts said that was an important step but not enough.
“The main event is for China to pledge a major cut in its emissions now, in this decade, as U.S., EU and others have,” Todd Stern, the climate envoy under former President Barack Obama, wrote on Twitter.
John Kerry, President Joe Biden’s international climate envoy, noted while in the city of Tianjin a month ago that China still plans to build 247 gigawatts of new coal power. That is nearly six times Germany’s entire coal power capacity. China’s plan “would actually undo the ability of the rest of the world” to restrain global warming to a relatively safe level, he said.
“Can the world afford to have China, as already the No. 1 emitter, continuing to grow in those emissions over the next 10 years? No,” Kerry said in an interview.
Over the past three decades, China’s growth in energy use has been explosive. Each year, China burns more coal than the rest of the world combined and almost as much oil as the United States.
But it is also making heavy investments in clean energy. China is the world leader in hydroelectric power, in solar power and in wind power. While China has mostly run out of rivers to dam for hydroelectric power, it has been building solar power and wind power faster than any other country in recent years.
Still, it is not enough.
“The renewable capacity additions are still not keeping up with demand growth” for electricity, said David Fishman, an energy analyst at the Lantau Group, a Hong Kong consultancy.
The United States and Europe have been able to reduce emissions more easily because their economies have been growing slowly. U.S. energy use was nearly flat over the decade before the pandemic and then fell sharply last year. Europe’s energy use was gradually declining even before the pandemic.
The United States in particular has been able to reduce emissions by gradually shifting from coal power to a greater reliance on natural gas, which emits about half the carbon dioxide when burned, and by ramping up its renewable energy.
But China needs to find a way to produce even more energy while reducing emissions at the same time — a tall order.
The United States and other countries are pressuring China to agree to help limit global warming this century to no more than 1.5 degrees Celsius compared with temperatures before the Industrial Revolution. That is the threshold beyond which scientists say the planet will experience irreversible damage. As countries continue to pump carbon emissions into the atmosphere, the Earth has already warmed about 1.1 degrees Celsius.
China is among the few countries that have not yet agreed on the 1.5 degree goal.
Complicating matters is China’s view that climate change is primarily a U.S. responsibility.
The United States has released more man-made carbon dioxide over the past century than any other country, although China is the biggest current emitter now by a wide margin and catching up fast in cumulative emissions.

China also resents pressure from the Biden administration to step up its climate ambition.
That is because former President Donald Trump in 2017 withdrew the United States from the Paris agreement, the pact among nations to fight climate change. That decision essentially stopped climate progress by the United States for four years.
“They don’t believe the U.S. is in a position to tell them what to do,” said Joanna Lewis, an expert in Chinese climate policy at Georgetown University.
Separately, the Biden administration has been upset with China for threatening to withhold cooperation on climate change if the United States continues to challenge Beijing on human rights and other issues.
China’s remarkable growth in energy consumption is fueled by its manufacturing sector. China has one-fifth of the world’s population but produces one-third of the world’s factory goods. The global reliance on China for exercise equipment, air conditioners and other products has spiked as economies reopen 19 months after the coronavirus pandemic began.
The biggest driver of China’s emissions, however, is its appetite for steel and cement, key ingredients for apartment towers, bullet train lines, subways and other large construction projects. Producing these two materials accounts for about one-quarter of China’s carbon emissions.
An electricity shortage has temporarily shut down thousands of factories in the past two weeks. Elevators have been turned off in low-rise buildings in southeastern China. Some municipal water pumping stations have been forced to halt operations in northeastern China. The blackouts, which are also affecting homes, make it even easier to justify further investment in fossil fuel power plants.
As China has run into power shortages, investment in coal mines — which had basically stopped by about 2016 — has begun to revive.
The construction of coal-fired power plants is still allowed through 2025. But many in China’s power sector expect that new coal plants will be prohibited beyond that point. Chinese power companies are now trying to decide whether to rush completion of more coal power plants to beat the deadline. Coal power can still be profitable in some areas of coastal China where clouds and weak breezes make solar and wind energy less viable.
Renewable energy in inland China sometimes generates more electricity than nearby consumers can use but then at other times produces too little. Just five years ago, three inland regions that create abundant solar and wind energy power — sparsely populated Inner Mongolia, Xinjiang and Gansu — were wasting up to two-fifths of that power.
To address this problem, China has built ultra-high-voltage transmission lines linking the country’s interior to hubs near the coast. But connectivity still has a ways to go. “New demand can more than be met by cleaner sources of energy” if transmission networks are expanded, Lewis said.
Beijing is also trying to use market forces to expand renewable energy. The Chinese government has ordered electric utilities to charge industrial and commercial customers up to five times as much when power is scarce, and generated mainly by coal, as when renewable energy is flooding into the grid.
Despite the aims of Beijing, provincial governments have other ideas.
“There’s a tug of war right now, ” said Kelly Sims Gallagher, a professor at the Fletcher School of Tufts University who studies China’s climate policies. “The central government is trying to limit coal production, and the local governments are doing the opposite. They want to restart plants or build new ones to get their local economies moving again post-pandemic.”