The world wants Greenland's minerals, but Greenlanders are wary

As global warming melts the ice that covers 80% of the island, it has spurred demand for Greenland's potentially abundant reserves of hard-to-find minerals with names like neodymium and dysprosium 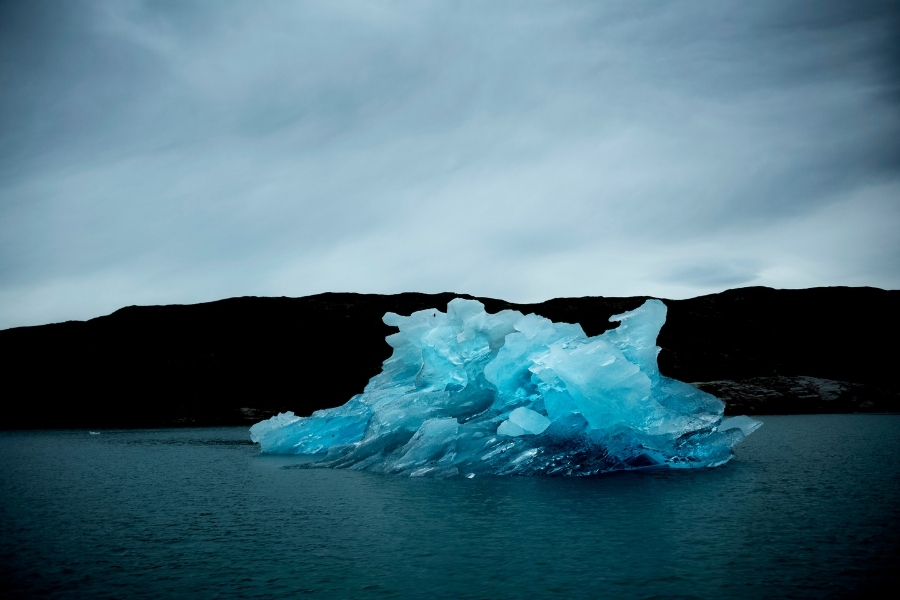 An iceberg that feeds the fjord near Narsaq, Greenland, Aug. 21, 2021. Greenland has rare elements needed for electric cars and wind turbines. But protesters are blocking one project, signaling that mining companies must tread carefully. (Carsten Snejbjerg/The New York Times)
NARSAQ, Greenland — This huge, remote and barely habited island is known for frozen landscapes, remote fjords and glaciers that heave giant sheets of ice into the sea.

But increasingly Greenland is known for something else: rare minerals. It’s all because of climate change and the world’s mad dash to accelerate the development of green technology.

As global warming melts the ice that covers 80% of the island, it has spurred demand for Greenland’s potentially abundant reserves of hard-to-find minerals with names like neodymium and dysprosium. These so-called rare earths, used in wind turbines, electric motors and many other electronic devices, are essential raw materials as the world tries to break its addiction to fossil fuels.

China has a near monopoly on these minerals. The realization that Greenland could be a rival supplier has set off a modern gold rush.

Global superpowers are jostling for influence. Billionaire investors are making big bets. Mining companies have staked claims throughout the island in a quest that also includes nickel, cobalt, titanium and, yes, gold.

But those expecting to exploit the island’s riches will have to contend with Mariane Paviasen and the predominantly Indigenous residents of the village of Narsaq.

Until she was elected to Greenland’s Parliament in April, Paviasen was manager of a heliport that provided one of the few ways to get to Narsaq, a village at the mouth of a fjord on the island’s southwest coast.

The forces reshaping the planet — extreme weather caused by rising temperatures, and rising demand for electric vehicles and other green technology that require bits of rare metals — converge at Narsaq, where fishing is the main industry and most people live in brightly colored wooden houses with tar paper roofs.

Because of climate change, the nearby fjord no longer freezes so solidly in winter that people could drive their cars on it.

But rocky heights above Narsaq, population about 1,700, also contain what may be some of the richest concentrations of rare minerals anywhere. The lodestone attracted an Australian company backed by Chinese investors that had hoped to blast an open-pit mine — until it ran into Paviasen.

The mine would bring jobs and tax revenue to the village, but it would also produce radioactive uranium. That alarmed Paviasen, who in 2013 formed a protest group she called “Urani? Namiik,” Greenlandic for “Uranium? No.”

“I was aware that this thing would affect us,” she said. “So I had to do something.”

Paviasen is a guarded person who speaks softly and chooses her words carefully, at least when speaking English, which is not her first language. But she also has a reputation in the region for implacability whose opposition to the mine has made her into a figure of some renown.

In April elections for Parliament, Paviasen and her protest group overcame a determined lobbying effort by the mining company, Greenland Minerals, and swayed public opinion in favor of a party that promised to stop the mine.

The victory for Paviasen and her alliance of sheep farmers, fishermen and other residents sent a signal to all those eyeing Greenland’s mineral wealth.

The lesson was that any project that threatened the environment or livelihoods was going to run into trouble from local people who were quite capable of standing up to powerful interests.

She is also aware that foreign money is still circling. “The mining companies know what we have in Narsaq,” she said with a frown. “We are not safe in the future.”

With 58,000 people in an area half the size of the European Union, Greenland has been a mecca for prospectors since the 1800s because of its geological history. Because there are almost no trees and sparse vegetation, it is much easier for geologists to read the rocks and find likely places to dig for valuable ore.

Climate change has exposed more potential deposits. Pacific-bound ships carrying ore can now sail across the top of Canada much of the year, shortening the trip to processing plants in Asia.

Reflecting Greenland’s newfound stature, the United States has recently stepped up its diplomatic presence. Antony Blinken visited Greenland in May, four months after being named President Joe Biden’s secretary of state, meeting with members of the newly elected Greenland government. Last year, the United States opened a consulate in Nuuk, the capital, for the first time since the 1950s. A delegation of U.S. officials visited Greenland last month and pledged aid to improve trade, education and the mining industry.

Anglo American, a British mining giant, has staked out swaths of an island believed to have lucrative deposits of nickel, essential for most electric car batteries. In August, KoBold Metals, a California company backed by Bill Gates and Jeff Bezos, formed a joint venture with Bluejay Mining, a British company, to search for minerals in Greenland using artificial intelligence to pinpoint deposits from mountains of data.

At the moment, only two mines in Greenland are active, one producing rubies and the other anorthosite, used in paints, plastic coatings and special varieties of glass. But dozens of companies have exploration projects underway, and five have licenses to begin digging.

Leaders of the new government in Greenland see the country’s ore as a means to work toward financial independence from Denmark. Greenland has a parliament that oversees domestic affairs, but Denmark determines foreign policy and subsidizes the Greenland budget with 3.9 billion Danish kroner per year, or about $620 million.

No one believes that Greenland’s reserves are big enough to make it the Saudi Arabia of nickel or titanium. Denmark would take a big share of any mining royalties.

Mining executives say they are aware of the need to pay attention to climate concerns. In August, rain fell for the first time at a research station at the high point of Greenland’s ice sheet. It was a topic of discussion wherever Greenlanders gathered.

Some mining companies see a chance to establish Greenland as a reputable source of the raw materials for emissions-free power generation and transportation.

“You can do it the right way,” said Bo Moller Stensgaard, a former Danish government geologist who is the CEO of Bluejay Mining.

He pointed to Bluejay’s plans to begin mining ilmenite, an ore that contains titanium, from a site hundreds of miles north of Narsaq. The ilmenite can be separated from the black sand that contains it using magnets rather than toxic chemicals, Stensgaard said, and the sand will be restored after mining is complete

‘A lot of money for local people’

Greenland Minerals has kept a low profile since the April elections brought an anti-uranium government to power, but it has not given up on mining near Narsaq. The company is looking for ways to address local concerns, for example by shipping the minerals somewhere else for processing rather than separating out uranium in Narsaq.

Greenland Minerals promised to train local people to work at the mine and to buy from local suppliers whenever possible. It also commissioned studies showing that radioactivity from the mine would be negligible and that there would be minimal impact on the environment.

The project would “bring many benefits to Narsaq and southern Greenland,” John Mair, the managing director of Greenland Minerals, said in an email. “It would be a significant economic stimulus for local businesses.”

Greenland Minerals’ largest shareholder, with a 9.4% stake, is Shenghe Resources, which has close ties to the Chinese government. Mair denied media reports that Greenland Minerals is a stalking horse for Chinese interests, saying Shenghe plays a crucial advisory role. “There are no Western world groups that can match Shenghe’s proficiency and expertise” in rare minerals, Mair said.

Some local people support the mining project, though they tend to be less visible. “It’s about jobs, work, a lot of money for the local people,” said Jens Karl Petersen, a cook in Narsarsuaq, a former U.S. air base about 30 miles from Narsaq.

A league of sheep farmers

On a sunny day in August, Aviaja Lennert, who raises sheep on a farm farther inland from Narsaq, steered her battered four-wheel-drive station wagon up a precarious gravel road to the crest of a high ridge and braked to a stop. Below, icebergs slowly drifted in the blue-green water of the fjord. The only sound was the wind and the occasional “baa” of a sheep grazing on the steep, rocky slopes.

Lennert, who also works as a schoolteacher and rents a small house on her farm to tourists, walked briskly up a nearby rise and pointed at a slab of dark gray mountain above.

“That’s where the mine will be,” she said.

Lennert and other farmers in the area, one of the few places in Greenland warm enough for agriculture, are among the most fervent supporters of Paviasen’s protest group. They are afraid that people would stop buying their meat, believing it tainted. The organization’s symbol, a smiling orange sun, is painted on the side of Lennert’s barn.

Sheep farming in Greenland is not an easy life. The roads are so rough that some farmers’ children sleep during the week at their elementary school in a nearby village. A daily commute would be too arduous, even though their homes may be only 10 miles away.

In the spring when the lambs come, the farmers sleep for weeks in their barns to deal with difficult births. The rewards of such a life are impossible to put a price on.

“This is one of the most beautiful places in Greenland,” Paviasen said. “It’s worth fighting for.”

“We will stop the mine.”