Air pollution is now a matter of life and death

Until adequate measures for transformative change to prevent air pollution at source are firmly in place, Indian cities will remain highly polluted, causing illness and death, and adversely affecting our GDP and climate 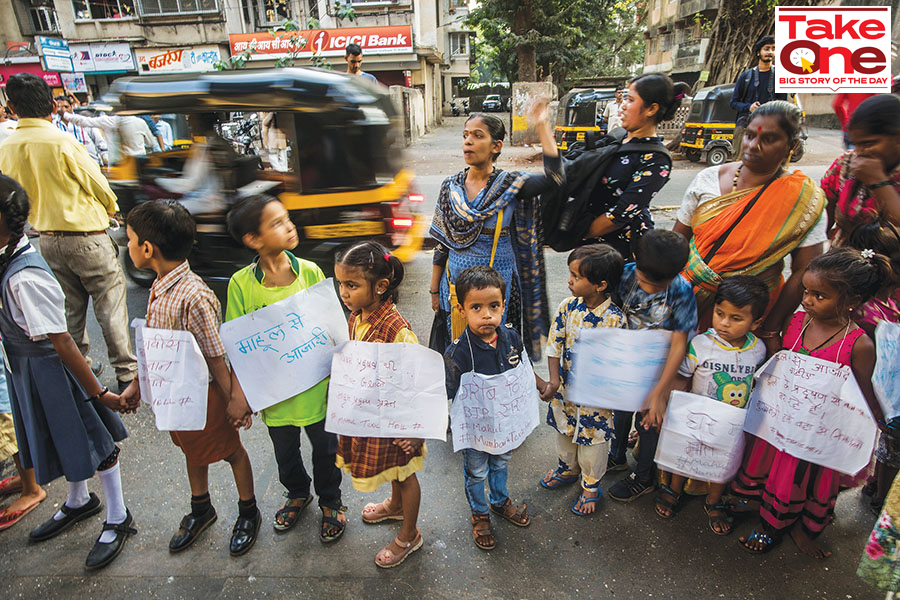 Residents of a Mumbai locality form a human chain to protest against the government move to resettle them next to a refinery and an industrial complex. Photo: Pratik Chorge / Hindustan Times via Getty Images
In a dharna (agitation) which began two years ago, Anita Dhole, a resident of Mahul in Mumbai’s Chembur, continued her protest against air pollution during the coronavirus lockdown in Mumbai while most people experienced blue skies, distant, scenic views and wildlife sightings in cities all over the world, and the United Nations (UN) announced its first Clean Air for Blue Skies Day. The UN has emphasised the need to “build back better” to avoid future shocks to our planet and has described air pollution as a leading health hazard and contributor to climate change. It has also drawn attention to the special burden of climate change, including indoor and outdoor air pollution on women.
Apart from suffering from health effects themselves, women face the brunt of childcare and household responsibilities, which increase disproportionately when a family member becomes ill. Unsurprisingly, women are also at the forefront of researching data, finding solutions and creating awareness, interacting with authorities and influencing policy change.

Dhole’s 600-day dharna on the footpath from October 28, 2018, was to highlight the predicament of nearly 30,000 people, including herself, resettled next to a refinery and an industrial complex in a Slum Rehabilitation Authority project. She tells those who will listen of heartbreak and misery where children who do not meet developmental milestones because of exposure to air pollution struggle to breathe. “People are dumped next to industrial effluents and air pollution from chemicals like benzene which measure dangerously high levels and make us ill, but we feel nobody cares,” she says.
ENT surgeon Dr Sarika Verma was moved to become a clean air activist when she observed that one in four children in Gurugram near Delhi (periodically the most air-polluted city in the world) has been on nebulisers and the air quality regularly crossed into hazardous levels in the winter months. “In India, 4.6 lakh people died of Covid-19 in the past 16 months, but 1.2 million people die annually from air pollution. Unlike Covid, air pollution is not treated as a health emergency to rectify a preventable cause of death,” she says. Verma goes on to explain that unborn children face low birth weight and premature delivery, and there is now evidence to suggest a mother’s placenta contains breathable particulate matter of 2.5 micrometre diameter (PM 2.5).
PM 2.5 are very fine particles, a mixture of solid and liquid droplets of 2.5 diameter or smaller, 30 times thinner than a human hair. They are inhaled deeply into the lungs, causing respiratory and other disease. In Maharashtra, an Indian Medical Council Report quantifies premature air pollution deaths as 1.4 lakh people in 2019, the second highest in any state in India. Eighteen of the non-attainment air quality cities in India are in Maharashtra.
Placed within Mumbai city limits, the Deonar open landfill has been key in the recognition of the city’s air pollution problem. It contains mixed garbage unscientifically dumped to a height of 100 feet; in 2016, more than 70 schools shut down for days in a blaze that could be seen on NASA images from space. People experienced the equalising nature of air pollution across socioeconomic sections as most of Mumbai was blanketed by smog and Deonar became a rallying point for air pollution-related discourse. 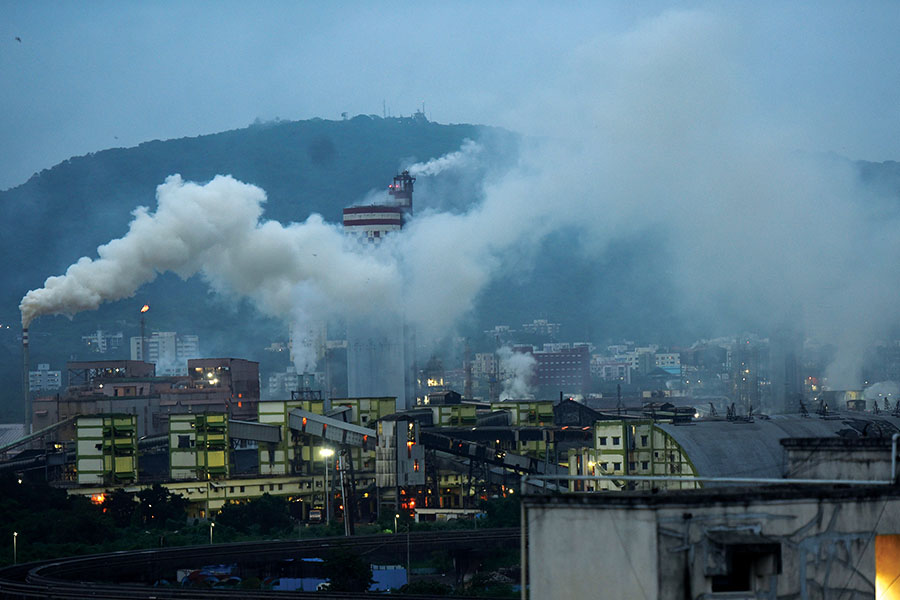 Industries in Mumbai’s Mahul village spewing highly polluted air. Photo by Vijayanand Gupta / Hindustan Times via Getty Images
Burning garbage dumps is ubiquitous in areas surrounding Mumbai in the absence of an effective garbage management policy and government air pollution monitoring networks do not cover them. I realised the near-complete lack of accessible data from source when I began documenting other informal garbage dumps soon afterwards. I imagined the people living alongside severely polluted air as I saw them walk alongside, white smoke billow into and around their homes.
In 2020, I measured air pollution on the roadaside in Bhiwandi with a hand-held meter next to kilometres-long burning garbage. The smell was noxious as plastic crumpled to white smoke and black shreds. The meter recorded 612µg/m3 breathable particulate matter of 2.5 diameter (PM2.5) at one-minute intervals, though the safe limit is only 20 µg/m3 in a 24-hour period. Unsurprisingly, the winter cough I already had inflamed my chest and I couldn’t speak for days. My meter, while not as accurate as the expensive air quality index stations installed by Pollution Control Boards, is highly indicative of high levels of individual exposure.
At Gurugram in 2014, software engineer and founder of Airveda, Namita Gupta, realised the lack of usable data as a mother concerned about the air her children were breathing at home. She experimented with manufacture of monitoring meters and networks  meters “I set up a system to monitor air quality at home, so that I would know when I could send my children down to play, expanded it to cover their school and now supply meters to augment the government’s formal AQI monitoring network. There is no way to measure air pollution in the coverage gaps without using low-cost meters,” she says.
Recently, she supplied her meters to the Maharashtra Pollution Control Board when they placed indigenously developed meters from four startups next to their stationery measuring points to evaluate accuracy of the data.
Anumita Roychowdhury and her colleagues at the Centre for Science and Environment, New Delhi, have even carried hand-held meters into the High Court and Supreme Court in 2015 to demonstrate air quality to judges. 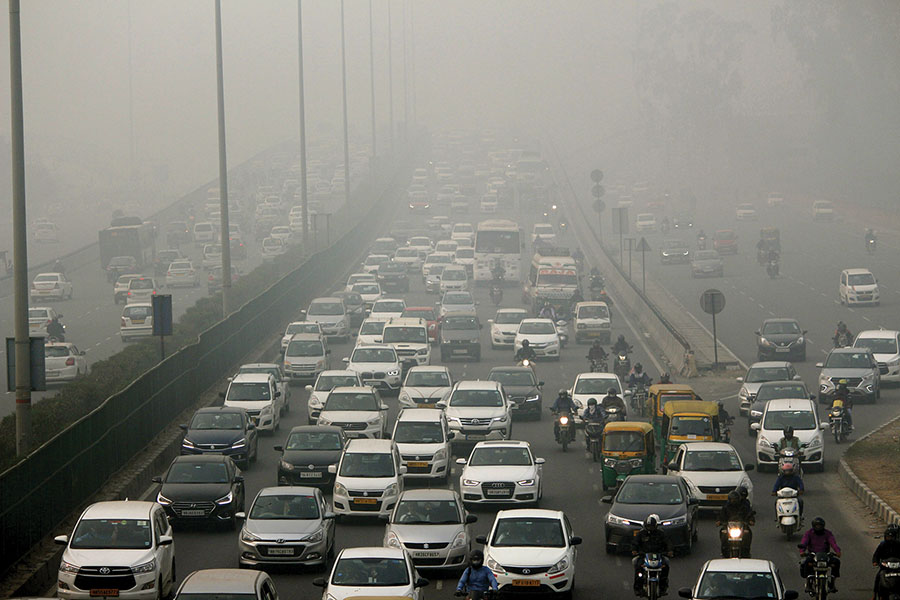