Rather than bouncing back, places hit repeatedly by hurricanes, floods and wildfires are unraveling as residents and employers leave, shrinking the tax bases and making it harder to fund basic services 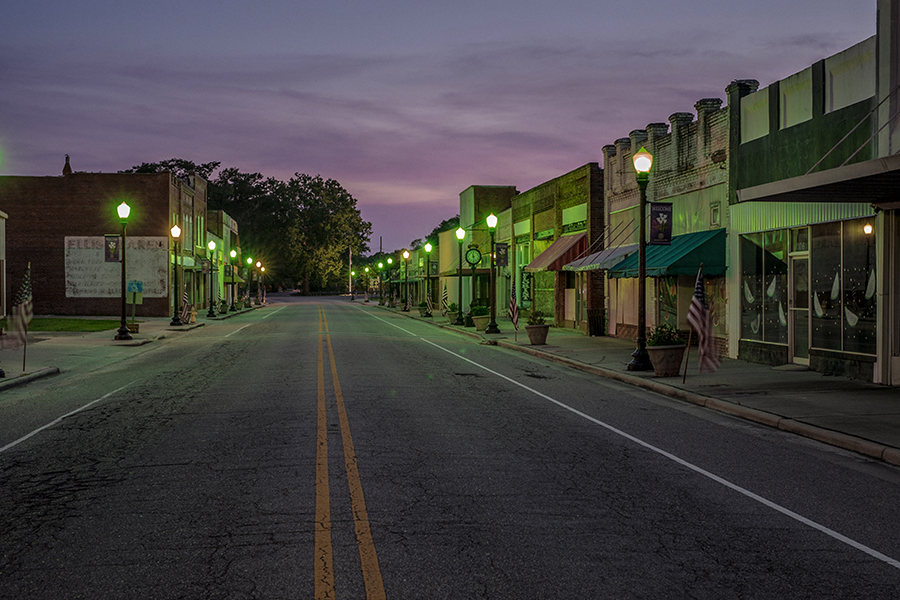 The abandoned downtown of Fair Bluff, N.C., five years since flooding from Hurricane Matthew devastated the small town, on June 18, 2021. Climate shocks have pushed already-struggling small rural communities like Fair Bluff to the brink of insolvency. Rather than bouncing back, many are simply unraveling.
Image: Mike Belleme/The New York Times

FAIR BLUFF, N.C. — It has been almost five years since Hurricane Matthew flooded the small town of Fair Bluff, on the coastal plain of North Carolina. But somehow, the damage keeps getting worse.
The storm submerged Main Street in 4 feet of water, destroyed the town hall and the police and fire departments, and flooded almost one-quarter of Fair Bluff's homes. After two weeks underwater, the roads buckled. The school and grocery store shut, then did not reopen. When Hurricane Florence submerged the same ground two years later, in 2018, there was little left to destroy.

What started as a physical crisis has become an existential one. The town’s only factory, which made vinyl products, closed a few months after Matthew. The population of around 1,000 fell by about half. The federal government tried to help, buying the homes of people who wanted to leave, but those buyouts meant even less property tax, tightening the fiscal noose.
Al Leonard, the town planner, who is responsible for its recovery, said his own job may have to be eliminated, and maybe the police department, too.
Climate shocks are pushing small rural communities like Fair Bluff, many of which were already struggling economically, to the brink of insolvency. Rather than bouncing back, places hit repeatedly by hurricanes, floods and wildfires are unraveling; residents and employers leave, the tax base shrinks, and it becomes even harder to fund basic services.
That downward spiral now threatens low-income communities in the path this week of Hurricane Ida and those hit by the recent flooding in Tennessee — hamlets regularly pummeled by storms that are growing more frequent and destructive because of climate change. 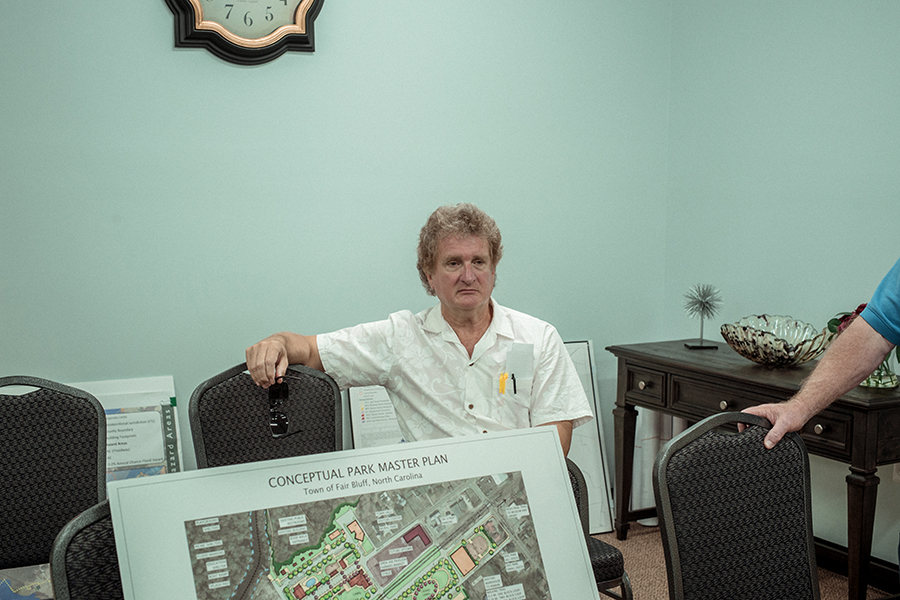 Al Leonard, who divides time as a planner for five communities, presents a park proposal in the small and struggling rural town of Fair Bluff, N.C., on June 16, 2021. Fair Bluff was badly flooded in Hurricane Matthew and is on the brink of bankruptcy. “If you look at what the folks here called downtown, really the only business that came back was the U.S. Post Office,” Leonard said.
Image: Mike Belleme/The New York Times
Their gradual collapse means more than just the loss of identity, history and community. The damage can haunt those who leave, since they often cannot sell their old homes at a price that allows them to buy something comparable in a safer place. And it threatens to disrupt neighboring towns and cities as the new arrivals push up demand for housing.
The federal government has struggled to respond, often taking years to provide disaster funds. And those programs sometimes work at cross purposes, paying some people to rebuild while paying their neighbors to leave.

What Comes After the Storm

Fair Bluff is small-town idyllic, nestled among fields of corn and tobacco near the South Carolina border, shielded from the Lumber River by a narrow bank of tupelo gum, river birch and bald cypress trees. But its main road offers a sobering glimpse of what climate change could mean for communities that cannot defend themselves.
On a recent afternoon, the sidewalks were empty and the storefronts abandoned, their interiors smashed up and littered with trash, doors ajar. The roof of one building had collapsed, a battered American flag stuck in the debris; inside other buildings were ransacked shelves, plastic containers full of Christmas decorations, an upside-down tricycle. Speakers on a Methodist church played recorded hymns for no one.
Some stores were strewn with cleaning supplies and half-full garbage bags, as if shopkeepers had first tried to fix the flood damage before giving up.
“If you look at what the folks here called downtown, really the only business that came back was the U.S. Post Office,” said Leonard, who splits his time between Fair Bluff and four other towns, none of which can afford a full-time employee on their own.
It is no coincidence that small towns in eastern North Carolina are among the first in the country to face an existential threat from climate change. Many were already struggling from the decline of the tobacco and textile industries, and the area’s flat terrain makes it especially vulnerable to flooding from powerful hurricanes that are coming more often.
Between 1954 and 2016, North Carolina was hit by 19 hurricanes severe enough to produce a federal disaster declaration, about one every three years. By contrast, four hurricanes have cleared that bar since 2018.
Leonard described Fair Bluff’s hopeful plan: Buy the ruined stores downtown, tear them down, clean up the land and turn it into a park that can flood safely. Build a new downtown a few blocks east on land is less likely to flood. Rebuild, revive and regain what has been lost.
But the town cannot afford any of it.
“We were a small town before the hurricanes; we’re much smaller after the hurricanes,” Leonard said. The median household income is $20,000 a year; many residents are retired, and just one-third have jobs. “Fair Bluff’s recovery will go as far as someone else’s money will take us.”

‘Ain’t Gonna Be That Many People on This Street’

That strategy has half-worked. The town won grants to rebuild in bits and pieces, repairing some roads and the drinking water system. Last spring, the Economic Development Administration, part of the U.S. Department of Commerce, announced $4.8 million to build a small business center. A company that makes pipes has said it would open a factory in Fair Bluff.
But clearing the old downtown could cost $10 million — money Fair Bluff does not have, Leonard said. And while the EDA is funding a new commercial building, other federal agencies are paying for residents to leave — residents who might have been customers for those new shops.
After Hurricane Matthew, the Federal Emergency Management Agency is paying to buy 34 houses in the town to demolish them — a process that can take years. Only 14 have been purchased so far; the rest should be sold sometime in the next year. FEMA’s rules require that no new homes be constructed on that property, taking it off the real estate tax rolls.
Buyouts protect people by getting them out of homes likely to flood, said David Maurstad, head of insurance and mitigation at FEMA. But he acknowledged it makes it harder for towns to stay economically viable. “That’s a real challenge for communities,” he said.
State officials offered to buy another 35 houses in Fair Bluff, this time with money from the U.S. Department of Housing and Urban Development. To persuade the town, the officials brought a map with a shaded area, showing the homes they said could not reasonably be protected against future floods.
Those homeowners, the state argued, should have the chance to leave.
The shaded area covered nine blocks in the middle of town. It would have carved a hole in Fair Bluff, which is only 3 square miles, setting aside land that could never be rebuilt upon. The town refused.
More buyouts would make it even harder for the town to survive financially, Leonard said. “Those folks have decided to stay in Fair Bluff,” he said. “Who are we to say, ‘We want you to leave?’”
But in interviews, some residents said that if another storm struck, they would not come back.