The right mix at the right place 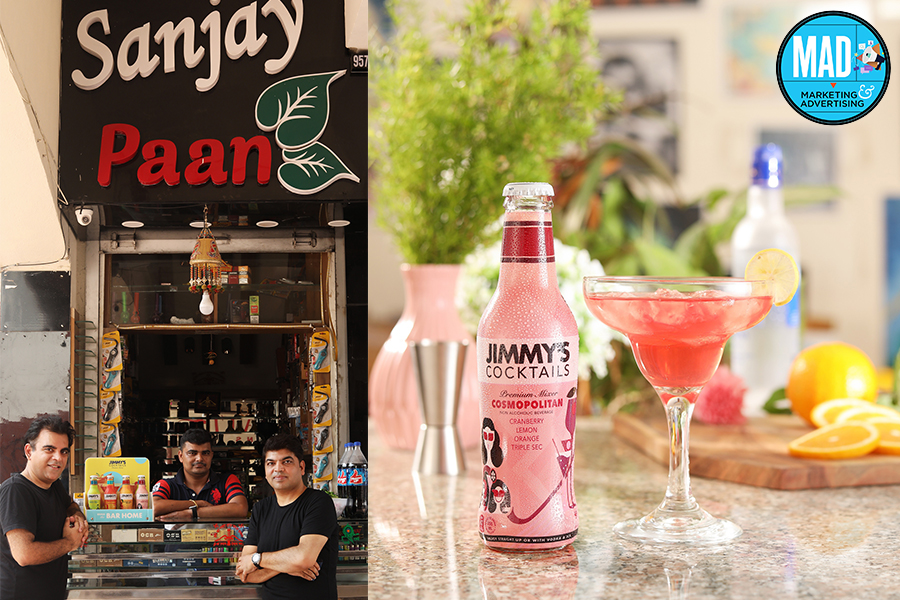 Jimmy Cocktails was launched in September 2019 by Ankur Bhatia (left), Nitin Bhardwaj (right) and Mirza BaigAnkur Bhatia admits it’s a constant problem. “After a while, I get bored and want to do something new,” says the serial entrepreneur who started his professional stint in a marketing role with Motorola in June 2003. After two years he quit, joined Rediffusion and quit again after seven months.
Bhatia’s next move—his third—was something heady. He turned entrepreneur and founded MensXP, which started as a lifestyle website for men in 2007. For the next five-and-a-half years, his head and heart didn’t ache for something new.
But it was simply a matter of time. In September 2008, the employer decided to turn employee. This time he found a new teacher when he joined Beam Suntory and started handling Teacher’s Scotch Whisky. Bhatia enjoyed his heady stint and stayed with the company for close to nine years.
And then, sometime in June 2017, his head and heart made their old familiar noises. Bhatia quit Beam Suntory and joined as head of marketing (electric vehicles) at Mahindra & Mahindra. “I wanted to learn about electric cars. Electric was going to be the future,” he recalls. In a little under two months, Bhatia’s electrifying future short-circuited. “I realised that my heart was addicted to alcohol,” he recounts, alluding to the almost decade-long stint he had with Beam Suntory.
Getting back to the liquor industry was an easy option. There was a problem, though. As against the alcohol business, Bhatia wanted to be in a business where the products could be sold online, the creative could be aired openly and not as a surrogate, and a product that didn’t carry any ‘stigma’. 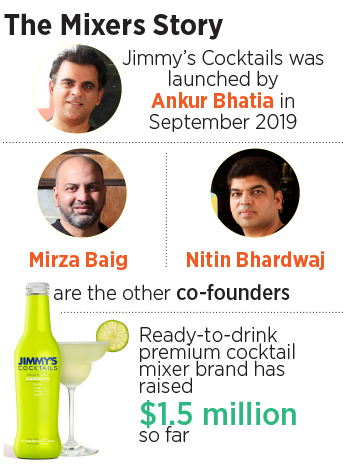 The brainstorming started. On a rainy day in Mumbai, Bhatia, along with his friends, was partying at an upscale bar in Bandra. After midnight, the celebrations continued at his home, but something was missing. Bhatia realised that his booze tasted flat with beverages and fruit juice. The bar in Bandra had better options in cocktails. “This seeded the idea to start my own brand,” he recalls. “That’s how Jimmy’s was born,” says the founder of Jimmy’s Cocktails, a non-alcoholic, ready-to-drink premium cocktail mixer brand which was rolled out in September 2019.
But why Jimmy’s? Was it his pet name? No, apparently it was the J factor. “Johnny, Jack and Jim were already taken,” he says, alluding to the names of the liquor brands Johnny Walker, Jack Daniel’s and Jim Beam. “So I picked Jimmy’s,” he says with a smile.
If Jimmy’s nomenclature story sounds interesting, then the tale behind how Jimmy’s first bottle got picked up is nothing short of crazy.
The pilot started in Gurugram, and at a betel shop: Sanjay Paan Bhandaar. Now why should a premium cocktail mixer brand be seen at a pint-sized shop selling cigarettes, chewing gum, cold drink and pan masala? This is exactly how Bhatia’s team and others who got to know about his crazy marketing plan reacted. But both Bhatia’s head and heart knew what they were doing. Bhatia knew Sanjay did brisk business not because of what the shop sold. It was because of the location. The betel shop was bang opposite a huge premium liquor store. After stocking up on booze, visiting Sanjay’s shop was a ritual for all the liquor buyers. “I was targeting these buyers,” explains Bhatia, who had to hard sell the idea to the owner of the shop. Sanjay, he recalls, finally relented when Bhatia dangled the incentive of a Thailand trip if the gambit worked.
After a few days, it was Sanjay’s turn to call Bhatia. “He declined the trip offer,” Bhatia recalls. Now all he wanted was a regular supply of Jimmy’s. The shop owner was startled at the speed at which the bottles vanished from his counter. Bhatia knew Jimmy’s has found the right mix, right crowd and right place. 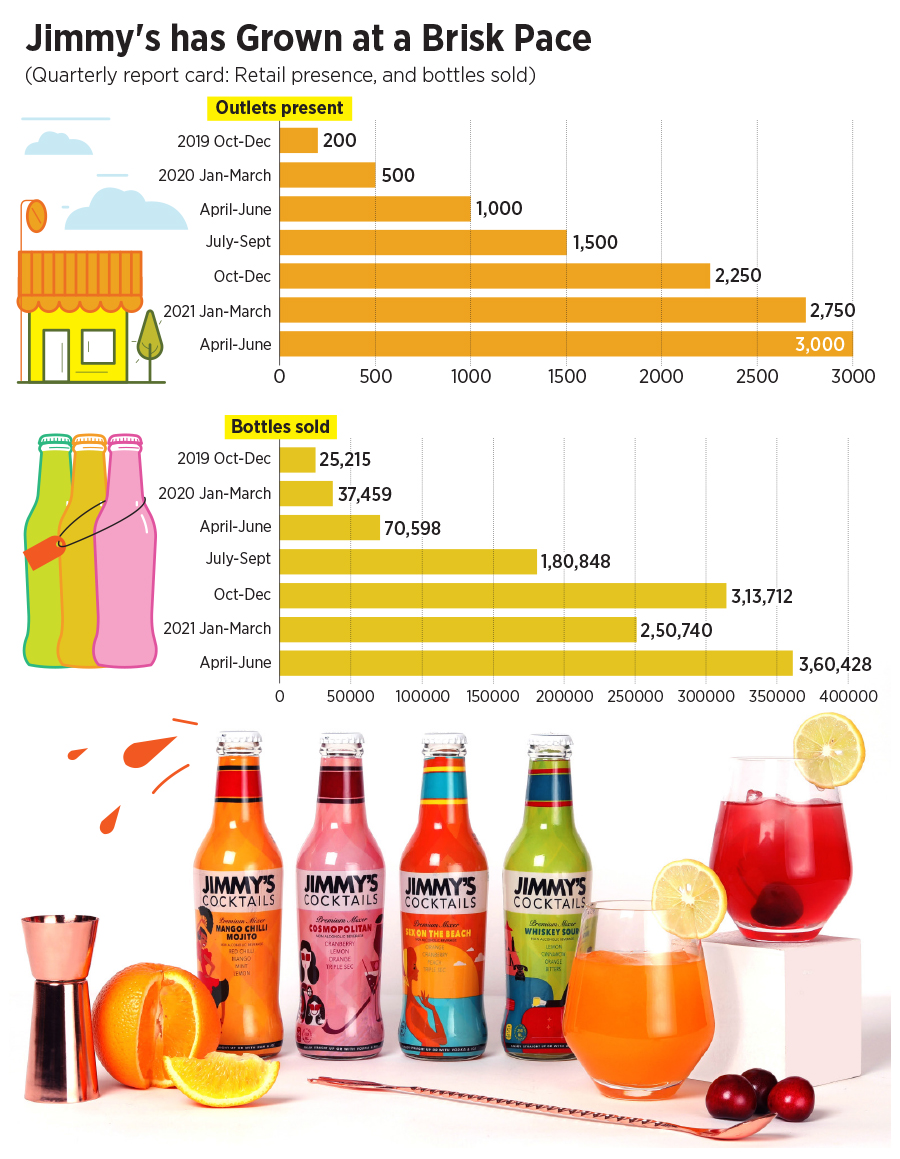 Though the beginning was heady, after six months Bhatia experienced a massive headache. No, this time it had nothing to do with his head. It was Covid-19, and the lockdown from March last year. Bars shut shop, shops shuttered and the consumption of liquor came to a screeching halt. As did Bhatia’s plan for a pan-India launch.

The gritty entrepreneur devised an intoxicating plan. He raised a war cry—‘bring the bar home’—and devised a high-decibel marketing campaign around the new brand positioning for Jimmy’s. The gambit worked, and Jimmy’s started flowing into homes. From some 70,000 bottles sold in the April-June quarter of last year, Jimmy’s clocked sales of over 3.5 lakh during the same quarter this year. Apart from being present online, the brand expanded its retail footprint by three times: From 1000 stores to 3,000 during the same period. “Today, 35 percent of our orders come from our website,” says Bhatia, claiming that the venture is profitable.
Bhatia now wants to aggressively scale up the brand in India as well as make a global foray. The challenge, though, is to take on four formidable rivals: Water, soda, juice and colas. “In India people mix alcohol with almost 925 million litres of something,” he says. Jimmy’s just has to find its place. “I just need to find a place in the glass. That’s it,” says the cocktail man who is now confident that his head, heart and soul are firmly aligned and addicted to a non-alcoholic business.

Tweets by @forbesindia
How will the Taliban govern? A history of rebel rule offers clues
Climate change is bankrupting America's small towns