A 'pacemaker for the brain': No treatment helped her depression—until this

Deep brain stimulation is used to treat Parkinson's disease and several other disorders, but isn't approved by federal regulators for depression because results have been inconsistent 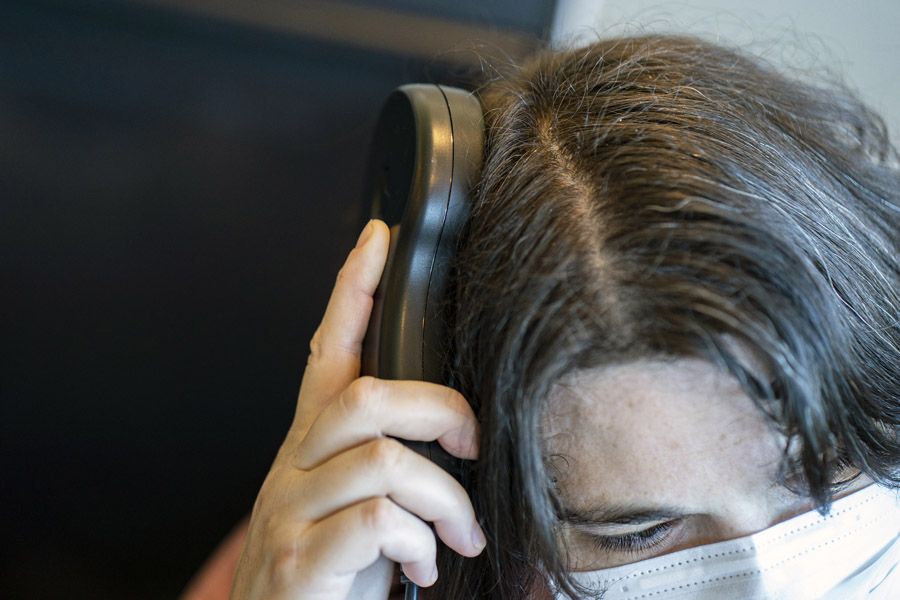 Sarah, who asked not to be fully identified, uses a magnet to download her brain activity from a device that detects when she is becoming depressed and delivers bursts of electrical stimulation at her home on Sept. 21, 2021. Her case raises the possibility the method may help people who don’t respond to other therapies. (Ruth Fremson/The New York Times)

Driving home from work in Northern California five years ago, a young woman was so overwhelmed with depression that all she could think about was ending her life.

“I couldn’t stop crying,” recalled Sarah, now 38. “The thought that consumed me the entire way on that road was just driving my car into the marshland so I can drown.”

She made it home but moved in with her parents soon after because doctors considered it unsafe for her to live alone. No longer able to function at work, she quit her health technology job.

She tried nearly every treatment: roughly 20 medications, months in a hospital day program, electroconvulsive therapy, transcranial magnetic stimulation. But as with nearly one-third of the more than 250 million people with depression worldwide, her symptoms persisted.

Then Sarah became the first participant in an unusual study of an experimental therapy. Now, her depression is so manageable that she’s taking data analysis classes, has moved to her own place and helps care for her mother, who suffered a fall.

“Within a few weeks, the suicidal thoughts just disappeared,” said Sarah, who asked to be identified by only her first name to protect her privacy. “Then it was just a gradual process where it was like my lens on the world changed.”

Researchers at the University of California, San Francisco surgically implanted a battery-operated, matchbook-size device in Sarah’s brain — a “pacemaker for the brain,” some call it — calibrated to detect the neural activity pattern that occurs when she is becoming depressed. It then delivers pulses of electrical stimulation to stave off depression.

Twelve days after Sarah’s device was fully operational in August 2020, her score on a standard depression scale dropped to 14 from 33, and several months later, it fell below 10, essentially signaling remission, the researchers reported.

“The device has kept my depression at bay, allowing me to return to my best self and rebuild a life worth living,” Sarah said.

Sarah’s is the first documented case of personalizing a technique called deep brain stimulation to successfully treat depression. Much more research is needed before it’s clear how effective the approach could be and for how many patients. But several teams of scientists are now working on ways to essentially match the electrical stimulation to what happens in an individual patient’s brain.

Deep brain stimulation is used to treat Parkinson’s disease and several other disorders, but isn’t approved by federal regulators for depression because results have been inconsistent. While some previous studies suggested benefits, two trials sponsored by U.S. device companies were stopped in the last decade because stimulation seemed no better than the placebo effect of a “sham” implant that provided no stimulation.

But those studies didn’t target individualized locations or patterns of electrical activity in people’s brains. It was “one size fits all,” said Dr. Darin Dougherty, director of neurotherapeutics at Massachusetts General Hospital, who worked on one of the halted trials. He called the personalized approach with Sarah, which he wasn’t involved in, “very exciting.”

“One person’s depression might look very different from another person’s depression,” said Dr. Katherine Scangos, an assistant professor of psychiatry at UCSF and an author of a report about Sarah’s case published Monday in the journal Nature Medicine. The senior authors were Dr. Andrew Krystal, an expert in neuro-modulation and mood disorders, and Dr. Edward Chang, whose work includes brain implants for paralyzed patients who cannot speak.

To identify the specific brain activity pattern linked to Sarah’s depression, researchers conducted an intensive 10-day exploration of Sarah’s brain, placing multiple electrodes in it and asking about her feelings when they applied stimulation to different locations in varying doses.

The exploratory phase guided the researchers to place the stimulation device in Sarah’s right brain hemisphere linked to electrodes in two regions. One was the ventral striatum, involved in emotion, motivation and reward, where stimulation “consistently eliminated her feelings of depression,” and the other the amygdala, where changes could “predict when her symptoms were most severe,” Scangos said.

While deep brain stimulation is typically delivered continuously, Sarah’s device is set to supply only a six-second burst when it recognizes her depression-linked brain activity pattern.

The goal, said Dougherty, is that stimulation will disrupt or shift the neural activity to produce a healthier pattern that will ease depressive symptoms.

Sarah has continued taking psychiatric medications, and the stimulation hasn’t eliminated depression-causing activity in her brain. But she can manage her illness much better, she said, instead of being unable to make even the smallest decisions, like what to eat.

“Our job now is really to figure out what is it that identifies who needs this kind of intervention,” said Dr. Helen Mayberg, director of the Center for Advanced Circuit Therapeutics at the Icahn School of Medicine in New York City, who pioneered the concept of deep brain stimulation for depression nearly 20 years ago.

Mayberg uses a different method of individualization. With imaging, she finds the location in each person’s brain where four white matter bundles intersect near a key depression-related region. After implanting electrodes and a stimulation device, “we pretty much set it and forget it,” delivering stimulation continuously while also helping patients with conventional therapy.

Neural activity is monitored “to learn the brain signature that heralds an impending depressive relapse or need for a dose adjustment or just indicates that the person is just having a bad week,” Mayberg said. She led one of the halted trials, but her work has also allowed patients to experience improvements that continue for years if stimulation is sustained.

In another approach, Dr. Sameer Sheth, an associate professor of neurosurgery at Baylor College of Medicine, and colleagues study a patient’s specific brain activity pattern to identify which of billions of combinations of stimulation characteristics, like frequency and amplitude, improve that patient’s depression.

He then tunes electrodes in two regions and applies that specific combination as continuous stimulation.

Over the year, the number of times a day that Sarah’s device has detected depression-linked brain activity and delivered stimulation has decreased somewhat but is still substantial, Scangos said. Still, some days Sarah doesn’t need the maximum amount the device is set to provide: 300 times or 30 total minutes daily. (It automatically stops around 6 p.m. because evening stimulation made her too alert to sleep.)

Longer-term and more detailed data on Sarah will be published later, said the researchers, who have two other participants so far.

To help researchers correlate brain activity with emotional states, two or three times a day, Sarah holds a doughnut-shaped magnet to her head, triggering the device to save the next 90 seconds of neural activity, and she completes a mental health survey. She’s been encouraged to pick moments “when she’s in a very good mood or a bad mood,” Scangos said. Also, twice daily, 12 minutes of neural data are automatically relayed to the device company and researchers.

Researchers, several of whom consult for device companies or have patents related to deep brain stimulation, expect it will take years to learn if individualized approaches are effective enough to be approved. Different methods might work for different people’s depression, and individualized stimulation might eventually help other psychiatric disorders, researchers say.