The pitched battle to pursue, or prevent, a breakaway European soccer superleague started to take shape after an announcement by 12 of the sport's richest and most popular teams that they were forming one 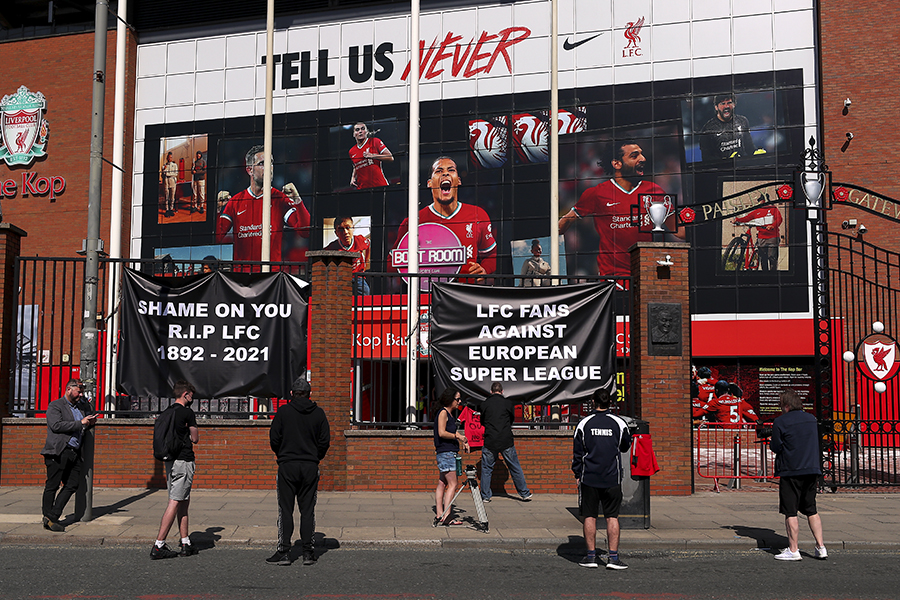 Banners are placed outside of Anfield, home of Liverpool FC by fans to protest against its decision to be included amongst the clubs attempting to form a new European Super League.
Photo Credits: Peter Byrne/PA Images via Getty Images

The superclubs have called in the lawyers. The president of European soccer has responded, calling the teams’ leaders “snakes and liars.” And the fans want no part of any of it.

The pitched battle to pursue, or prevent, a breakaway European soccer superleague started to take shape Monday, hours after the stunning announcement late Sunday by 12 of the sport’s richest and most popular teams that they were forming one.

The plan threatens to redraw the European soccer economy, from rich clubs in the Premier League to tiny ones in every corner of the Continent, and funnel billions of dollars toward a handful of wealthy elite teams. It would represent one of the biggest wealth transfers in sports history, imperil the future of marquee events like the Champions League and threaten the existence of the domestic leagues and the smaller clubs that were left behind.

By first light Monday, the fight was on. In a letter written by the breakaway teams, they warned soccer’s authorities that they had taken legal action to prevent any efforts to block their project.

A few hours later, Aleksander Ceferin, president of European soccer’s governing body, UEFA, used his first public appearance to denounce the group behind the plan and vowed to take stern action if it did not reverse course. He raised the possibility of barring players on the participating teams from events like the World Cup and other tournaments, and threatened to banish the rebel clubs from their domestic leagues. Sunday’s announcement, he said, amounted to “spitting in football fans’ faces.”

By then the outrage was spreading. In Germany, Bayern Munich and Borussia Dortmund — clubs seen as potential joiners of the breakaway league — distanced themselves from the plan. In France, Paris Saint-Germain midfielder Ander Herrera lamented “the rich stealing what the people created.” In Spain, La Liga has convened a meeting of its clubs but will hold it without the three teams — Real Madrid, Barcelona and Atlético Madrid — who have agreed to join the Super League.

And in England, fan groups united in their opposition to the proposal, and Liverpool fans demanded the club remove their banners from the team’s stadium before its next home game Saturday.

“We feel we can no longer give our support to a club which puts financial greed above integrity of the game,” one of the groups said on Twitter.

As they went public Sunday with their plans for the European Super League, though, the proposal’s backers simultaneously wrote to the president of FIFA, world soccer’s governing body, and to UEFA’s Ceferin saying that they would like to work with the organizations but that they had also taken measures to protect their interests.

The group includes a dozen top teams from England, Spain and Italy, such as Manchester United, Liverpool, Real Madrid and Juventus, and its six-page missive made clear its intent to proceed, and to overcome any opposition.

Rumors of the creation of the breakaway competition, which hopes to add three more permanent founding members to what will be an annual 20-team league, prompted FIFA in January to bow to pressure from UEFA and issue a statement that threatened severe repercussions against players and clubs involved in any unsanctioned tournament. FIFA issued a statement of “disapproval” of the breakaway plan Sunday but notably did not repeat the threat of expelling those who took part.

Faced with that threat, though, the company created to control the new Super League said in its letter sent Sunday that motions had been filed in multiple courts to prevent any moves to jeopardize the project, which, its organizers said, has $4 billion of financing in place.

The company has “taken appropriate action to challenge the legality of the restrictions to the formation of the competition before such relevant courts and European authorities as may be necessary to safeguard its future,” said the letter, a copy of which was reviewed by The New York Times.

The superleague the clubs have agreed to form — an alliance of top teams closer in concept to closed leagues like the NFL and the NBA than to soccer’s current model — would bring about the most significant restructuring of elite European soccer since the creation of the European Cup (now the Champions League) in the 1950s.

Yet even as it detailed its preemptive legal actions, the six-page letter invited soccer’s leaders to hold “urgent” talks to find a common path forward for a project that the group says will benefit soccer even beyond the narrow group that will enjoy unparalleled riches. Under the plan announced Sunday, the 15 founding members of the Super League would share an initial pool of 3.5 billion euros (about $4.2 billion).

That equates to some $400 million each, more than four times what the winner of the Champions League took home in 2020. In the letter, the founders of the Super League said they did not wish to replace the Champions League but instead wanted to create a tournament that would run alongside it.

The damage to the prestige and value of the Champions League, though, would be immediate and run into the billions of dollars, turning what has for decades been club soccer’s elite competition into a secondary event, one that is unlikely to retain anything close to its current commercial appeal.

In a concurrent effort to make the event more valuable, UEFA on Monday ratified the biggest changes to the Champions League since 1992. And then Ceferin held a news conference in which he took direct aim at the rival league.

Having digested the letter’s content, Ceferin said, he was in no mood to acquiesce to demands for an urgent meeting. Instead, he issued pointed rebukes to several of the men leading the effort and singled out Andrea Agnelli, chairman of the Italian champion Juventus.

Agnelli, who resigned from his role on UEFA’s executive committee after the announcement of the breakaway, had spoken to Ceferin as recently as Saturday. At the time, Ceferin said, Agnelli had told the UEFA president he fully supported changes to the Champions League and dismissed talk of a breakaway as “just rumors.”

“Agnelli is the biggest disappointment of all,” said Ceferin, who worked as a criminal lawyer before moving into soccer. “I’ve never seen a person who would lie so many times and so persistently as he did.”

Ed Woodward, the vice chairman of Manchester United, gave his support for UEFA’s Champions League restructuring as recently as Thursday, Ceferin added. He said UEFA was considering seeking damages from the 12 clubs that formed the breakaway group, and even from some of their top officials.

The substantial changes to the Champions League may now be consigned to irrelevance, though, if the breakaway clubs manage to get their way and take to the field in a competition that they said they hoped to begin as soon as this summer. Their urgency stems from their financing; the investment bank JPMorgan Chase has provided 4 billion euros in debt financing to start the league, but it is contingent on the group’s securing a broadcast contract.

In the letter, the group said that its urgency stemmed from the huge losses piling up as a result of the coronavirus pandemic. The sight of games played in cavernous but empty stadiums has become the norm, and restrictions on public gatherings mean that hundreds of millions of dollars are being lost in gate receipts in every league in Europe, while broadcasters have also clawed back vast sums from leagues and competition organizers.

FIFA issued a statement late Sunday in which it reiterated that it would not support a closed breakaway competition. The Super League’s founders, though, insisted that their event is not completely closed, since they plan to provide access every season to five teams outside the 15 founding members.

Tweets by @forbes_india
Amid Biden climate push, a question looms: Is America's word good?
Are there enough vaccines for everyone above 18?