How Germany hopes to get the edge in driverless technology

With its requirement that autonomous vehicles be overseen by humans, the German law reflects a realisation in the industry that researchers are still years away from cars that can safely allow the driver to disengage while the car does all the work 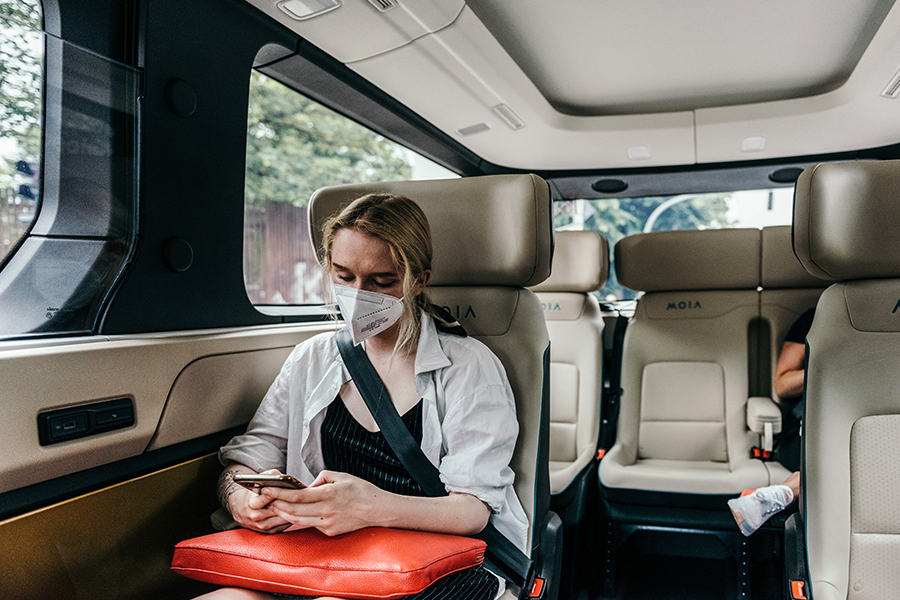 Passengers ride in an autonomous electric van operated by a Volkswagen subsidiary on the streets of Hamburg, Germany, June 30, 2021. The vehicles steer themselves, but technicians working from a remote control center keep an eye on their progress with the help of video monitors. Image: Felix Schmitt/The New York Times

FRANKFURT, Germany — In Hamburg, a fleet of electric Volkswagen vans owned by a ride-hailing service roams the streets picking up and dropping off passengers. The vehicles steer themselves, but technicians working from a remote control center keep an eye on their progress with the help of video monitors. If anything goes wrong, they can take control of the vehicle and steer it out of trouble. This futuristic vision, within reach of current technology, is about to become legal in Germany. The Parliament in Berlin approved a new law on autonomous driving in May, and it awaits the signature of Germany’s president, a formality. The law opens a path for companies to start making money from autonomous driving services, which could also spur development.

With its requirement that autonomous vehicles be overseen by humans, the German law reflects a realization in the industry that researchers are still years away from cars that can safely allow the driver to disengage while the car does all the work. The law also requires that autonomous vehicles operate in a defined space approved by the authorities, an acknowledgment that the technology is not advanced enough to work safely in areas where traffic is chaotic and unpredictable.  So German companies that are pursuing the technology have adjusted their ambitions, focusing on moneymaking uses that don’t require major breakthroughs.  Germany’s nationwide approach contrasts with the patchwork of state laws in the United States. The U.S. government has issued guidelines for autonomous driving, but attempts to establish mandatory rules that would apply in all 50 states have foundered in Congress amid disagreement among automakers and autonomous driving developers about what the legislation should say.  Some states have encouraged autonomous driving research; Arizona allows Waymo, for example, to offer driverless taxis in Phoenix. But it’s not yet possible to roll out such services nationwide, achieving the kind of scale that would help make them profitable.  “Germany is unique in the sense that you now have a law that pertains to the entire country,” said Elliot Katz, the chief business officer of Phantom Auto, a California company that provides software to monitor and control vehicles remotely. “In the U.S., we do not have any overarching federal autonomous driving regulation. We have state laws, which is problematic because driving is inherently interstate.”  The German legislation could also give the country’s automakers an edge in the race to design cars that can drive themselves. By deploying autonomous vehicles commercially, they will gather large amounts of data they can use to advance the technology. If the services are profitable, they will also help pay for further development. “There are two major topics for the German car manufacturers: the change to electric cars and autonomous driving,” said Moritz Hüsch, a partner at the Covington law firm in Frankfurt, who has followed the legislation. “The German car manufacturers are one of our crown jewels. They are really keen to get at the forefront of both topics.”  The law permits autonomous vehicles that remain within a defined territory and are overseen by trained technicians. Crucially, it allows the monitors to keep tabs on numerous vehicles remotely. That means a person or team could supervise a fleet of autonomous shuttle vans or self-driving taxis by video from a command center, eliminating the need for a supervisor in every vehicle. In case of trouble, a technician would be able to take control of the vehicle from afar.  Proponents say the law will allow autonomous buses to serve rural areas where public transportation is scarce. Other services might include automated valet parking or robot package delivery. Autonomous vehicles could be used to transport components or workers around a factory complex or students around a university.  Vehicles already exist that can navigate a predictable course, such as from an airport parking lot to a departure terminal, but existing German law requires a human to be on board, which cancels out any cost savings from eliminating the driver.  If a driver can oversee a dozen buses from a command center, “there are use cases that would now be attractive,” said Peter Liggesmeyer, director of the Fraunhofer Institute for Experimental Software Engineering in Kaiserslautern. That will encourage more development, he said.  In technical jargon, the new law allows Level 4 autonomous driving, in which a vehicle can steer and navigate by itself most of the time but may occasionally require human intervention. That is one step away from the autonomous driving nirvana of cars that can operate without any human help.  Volkswagen, for example, has been testing a ride-sharing service in Hamburg and Hanover called Moia. The new law makes it easier for Volkswagen to achieve its goal of converting Moia’s electric vans to autonomous operation by 2025, though further changes in the country’s public transport law may also be needed.  “The use of self-driving vehicles in Germany is now possible,” Christian Senger, a senior vice president at Volkswagen’s commercial vehicles division responsible for autonomous driving, said in a statement. “That is something that not only Volkswagen but all market participants have been waiting for.”  Technology companies like Waymo or carmakers like Toyota have invested billions of dollars in autonomous driving technology, but have yet to see much return on their investment. Uber sold its self-driving unit last year after investing more than $1 billion. Fatal crashes involving Tesla’s Autopilot software have raised questions about the technology’s shortcomings.  Whether a uniform legal framework will give German companies a decisive edge over U.S. companies is another question. That was the intent.  “Germany can be the first country in the world to bring vehicles without drivers from the laboratory into everyday use,” Arno Klare, a Social Democratic member of Parliament, said during debate about the law in Berlin.  In the United States, as soon as an autonomous vehicle tries to cross states lines, things get complicated. California, Arizona, Michigan and Pennsylvania are considered leaders in providing legal parameters for autonomous driving technology. But 10 states, including New Jersey, Rhode Island and Maryland, have not enacted laws or issued executive orders governing autonomous driving, according to the National Conference of State Legislators. Rules in other states have not followed a consistent template.  Raj Rajkumar, who leads the autonomous driving program at Carnegie Mellon University in Pittsburgh, which has produced many of the leading scientists in the field, said the new legislation would give German companies an advantage. But he said he was concerned that the United States and Europe were both at risk of falling behind China in technology and regulations.  “There is an international arms race between the U.S., Europe and China,” said Rajkumar, who estimates that fully autonomous vehicles are still a decade away. “China is an authoritarian country. They can pass any rules they want overnight.”

Tweets by @forbesindia
Photo of the day: Some respite, finally
A cure for loneliness in a pandemic for India's senior citizens