This week, a Chinese foreign ministry spokesman repeatedly used an official podium to elevate unproven ideas that the coronavirus may have first leaked from a research facility in Fort Detrick, Maryland 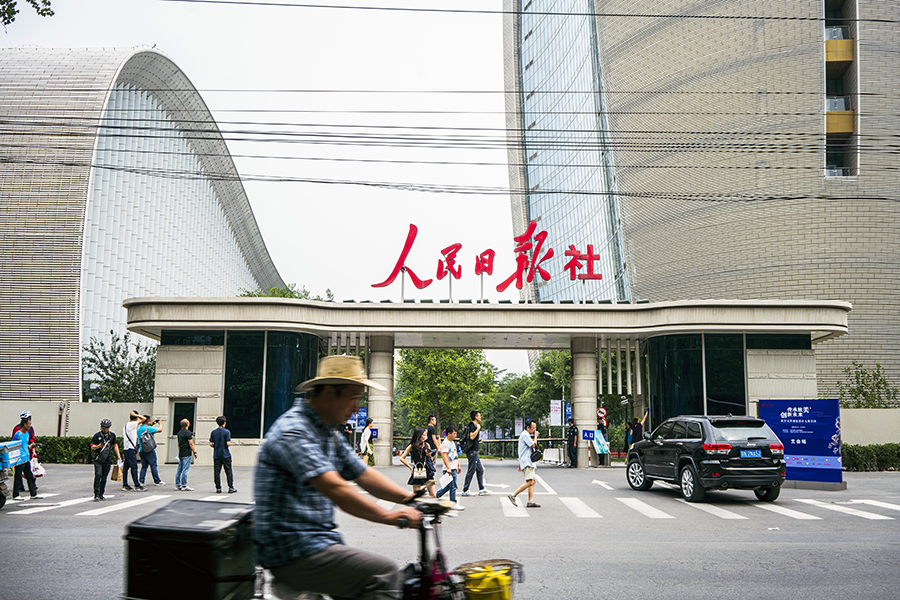 Outside the People’s Daily and Global Times in Beijing on June 21, 2019. Both publications have peddled theories about the coronavirus having originated in the United States; Image: Giulia Marchi/The New York Times

When a conspiracy theory started circulating in China suggesting that the coronavirus escaped from a U.S. military lab, it had largely stayed on the fringe. Now, the ruling Communist Party has propelled the idea firmly into the mainstream.
This week, a Chinese foreign ministry spokesman repeatedly used an official podium to elevate unproven ideas that the coronavirus may have first leaked from a research facility in Fort Detrick, Maryland. A Communist Party publication, the Global Times, started an online petition in July calling for that lab to be investigated and said it gathered more than 25 million signatures.
Officials and state media have promoted a rap song by a patriotic Chinese hip-hop group that touted the same claim, with the lyrics: “How many plots came out of your labs? How many dead bodies hanging a tag?”
Beijing is peddling groundless theories that the United States may be the true source of the coronavirus, as it pushes back against efforts to investigate the pandemic’s origins in China. The disinformation campaign started last year, but Beijing has raised the volume in recent weeks, reflecting its anxiety about being blamed for the pandemic that has killed millions globally.
These theories, promoted by officials, academics, central propaganda outlets and on social media, have gained wider currency in China. They risk further muddying inquiries into the source of the virus and aggravating already frayed relations between the world’s top two powers at a time when cooperation is badly needed.
“This not only contributes to the further deterioration of U.S.-China relations but also makes it even less likely for the two countries to work together to face a common challenge,” said Yanzhong Huang, director of the Center for Global Health Studies at Seton Hall University. “We haven’t seen any bilateral cooperation over the vaccines, tracing the trajectory of the virus or mutations, any of these kind of things.”
Understanding the origin of the virus could help scientists prevent another pandemic. Virologists still largely lean toward the theory that the virus jumped from infected animals to humans outside a lab, but calls are growing to also investigate the possibility that the virus escaped from a lab in Wuhan, the city at the center of the outbreak.
China has dismissed the Wuhan lab leak hypothesis as an unfounded conspiracy theory. It has also criticized the United States’ pandemic response while highlighting its own success in taming a recent outbreak of the highly transmissible delta variant, with only a handful of new cases reported this week.
Wary of independent scrutiny, Beijing has tightly controlled efforts by the World Health Organization to investigate the origin of the outbreak, and it rejected the health agency’s recent call for a second phase of an inquiry that would look more closely at the lab theory.
China has been ramping up its disinformation campaign ahead of the results of an investigation by U.S. intelligence agencies, ordered by President Joe Biden. The agencies delivered their report on the origin of the pandemic to the president on Tuesday but have not yet concluded whether the virus emerged naturally or was the result of an accidental leak from a lab.
“The point is to really saturate the airwaves with all of this, which most average Chinese will not be able to see behind,” said Dali Yang, a professor of political science at the University of Chicago. “A lot of it is anticipating and trying fend off, preemptively, this potential American study by the intelligence community.”

The Chinese government has argued that Beijing has done its part in the search for the origin of the pandemic by facilitating a visit by experts from the WHO earlier this year, and that scientists should now look at other countries, including the United States. Beijing accuses those pushing for a lab investigation in China of trying to undermine the country’s image at home and abroad.
Wang Wenbin, a Chinese foreign ministry spokesman, has used routine news briefings this week to air baseless speculation that the virus had emerged in the United States before the first cases were reported in China. He cited an outbreak of lung disease in July 2019 in Wisconsin that American health authorities have already connected to vaping, not COVID. On Wednesday, he said the WHO should investigate labs in Fort Detrick and elsewhere in the United States that research coronaviruses.
“The United States has been accusing China of being opaque on the issue of tracing the origins of the virus and falsely accusing China of using false propaganda,” Wang said Tuesday. “Yet it has been making excuses, carefully concealing secrets, avoiding problems passively and constantly setting up obstacles.”
Michael Ryan, a WHO official, criticized China at a news conference Wednesday for pushing such unproven ideas. “It is slightly contradictory if colleagues in China are saying that the lab leak hypothesis is unfounded in the context of China, but we now need to go and do laboratory investigations in other countries for leaks there,” Ryan said.
Yet in a report released this month, several Chinese policy research institutes accused the United States of “manipulating global public opinion by practicing ‘origin tracing terrorism.’ ” China was being transparent, the report said, while it was American officials who were evading questions about Fort Detrick.
One of the report’s authors, Wang Wen, a professor at the Chongyang Institute for Financial Studies of Renmin University, said that unsubstantiated suggestions that the coronavirus was created in a laboratory were a form of terrorism because they caused “unnecessary horror to society.”
He defended the report’s allegations about the Fort Detrick lab, saying, essentially, that it was the United States that started it.
“It was American politicians who first said it and expanded on this,” Wang said. “China could have been cooperative originally, but after facing such smears, it must also raise reasonable questions to the United States.”
The report argued that the pandemic may have started in the United States, pointing to the closure of a lab at Fort Detrick over safety concerns in August 2019 and deaths at a nursing home in Virginia in July 2019 as suspicious.
Never mind that such claims have been widely dismissed by scientists. (“I don’t think there is any validity to those accusations,” said Huang of Seton Hall University.) They have been given prominent play in China. This month, the state broadcaster carried several segments on what it called Fort Detrick’s “dark history.” The People’s Daily has recently run a 16-part series on American failures in controlling the coronavirus, with repeated questions about the Fort Detrick conspiracy.
“Why has the United States not invited the WHO to visit Fort Detrick?” the newspaper wrote in an Aug. 6 commentary. “On the issue of traceability, if you can come to China, why can’t you go to the United States?”
The efforts to emphasize American malfeasance have sometimes backfired. After Chinese state media quoted a Swiss biologist who warned that the WHO effort to examine the origins of the pandemic would become a tool of the United States, the embassy of Switzerland in China said the expert appeared to be fictitious.
“If you exist, we would like to meet you!” the Swiss Embassy tweeted. “But it is more likely that this is a fake news, and we call on the Chinese press and netizens to take down the posts.”
Still, the coronavirus conspiracies have been widely recirculated on social media.
On Weibo, a popular social media platform in China, hashtags like “the United States must answer” and “debunk the astonishing inside story of Fort Detrick” have been viewed more than 100 million times.
Jenny Zhang, a 21-year-old student in the eastern city of Nanjing, said she signed the Global Times petition for a Fort Detrick investigation after reading multiple reports in Chinese media that suggested the outbreak began much earlier in the United States.
“It’s about the safety of all mankind,” Zhang said. “If it turns out that the virus did not originate in China, I think it would change other people’s views on China.”

Tweets by @forbes_india
Few women ascend Japan's corporate ladder. Is change finally coming?
He came, he saw, he failed, and then...