The efforts in Japan are intended to overcome decades of unkept promises from political and business leaders to increase opportunities for Japanese women, who face some of the starkest inequality in the developed world 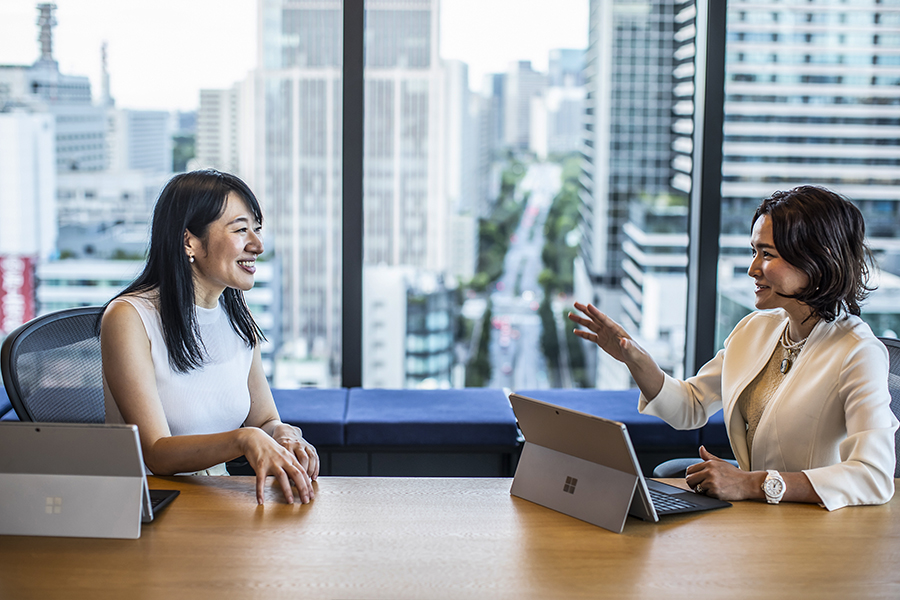 Naomi Koshi, left, and Kaoru Matsuzawa in their office in Tokyo, on Aug. 20, 2021. Koshi and Matsuzawa started a firm earlier this year to train women for board positions and match them with companies; Image: Shiho Fukada/The New York Times

TOKYO — When Naomi Koshi was elected in June to the board of one of Japan’s largest telecommunications companies, she became one of the few women in the country to reach the top of the corporate ladder.
Now that she’s there, she wants to pull others up with her.
“In Japan now, in most companies, only old men make decisions,” Koshi, a partner at law firm Miura & Partners, said during a recent interview. “If we have more female votes on boards, we can change companies,” she said, adding that “if more people join the decision-making process, that will change the culture and create innovation.”
Japanese companies are under growing pressure both at home and abroad to elevate more women to positions of authority. Next year, the Tokyo Stock Exchange will adopt new rules that push companies listed in its top tier to take steps to ensure diversity, including the promotion of women, a move that aligns it with other major stock markets. This month, Nasdaq received U.S. approval for a similar, albeit more far-reaching, policy.
The efforts in Japan are intended to overcome decades of unkept promises from political and business leaders to increase opportunities for Japanese women, who face some of the starkest inequality in the developed world. They remain less likely to be hired as full-time employees and on average earn almost 44% less than men. Many leave their jobs after having a child, and making up the lost time is almost impossible under Japan’s seniority-based system.
With this constricted pipeline, Japanese companies often complain that they cannot find enough qualified female candidates from their own ranks to fill their boards. Only 6% of directors at listed companies in Japan are women, according to government statistics, compared with about a quarter among Fortune 500 companies in the United States. In Japan, almost all come from outside the companies on whose boards they sit.
Believing the moment is ripe for change, Koshi and a co-worker, Kaoru Matsuzawa, this year started OnBoard, a firm aimed at training hundreds of women for board positions and seeking to match them with companies.
As changing corporate governance standards require more diversity on boards as well as more external directors, slots will open that Koshi’s company can fill.
Still, Japan has a long way to go to make up for its unfulfilled commitments. In 2003, the Japanese government declared that by 2020, women would occupy 30% of all management positions, the equivalent of the corporate vice president level and up. The pledge languished, but Shinzo Abe, after becoming prime minister in 2012, prominently resuscitated it as part of an economic agenda that he said would make women “shine.”
The year 2020 has come and gone, and Japan, while making some progress, is still less than halfway to its goal. With just over 13% of its management jobs held by women, Japan barely edges out Saudi Arabia, according to data from the International Labor Organization. The administration gave itself a 10-year extension, promising to achieve the goal by the end of 2030.
Japan’s largest business lobby, Keidanren, also joined in. In November, it published a growth strategy for the country in which it noted that “given the male-to-female population ratio, it would be a natural conclusion for women to account for around 50% of leadership positions.”
It was not, however, prepared to make such a bold recommendation. Instead, it called for companies to renew their efforts to achieve the 30% goal by the end of the decade, in line with the government’s plan.
Such disparities run the length of the workforce hierarchy. In 2019, more than 44% of women worked in part-time or temporary positions, compared with just under 12% of men. When the coronavirus pushed Japan into a state of emergency in May 2020, women were the first to lose their jobs.
By some measures, the situation for Japanese women has actually worsened in recent years. A report in March on gender inequality by the World Economic Forum ranked Japan 120th out of 156 countries. In 2015, it ranked 101st.
With women largely shut out of upper management in Japan, one of the primary paths to corporate boards has been through foreign companies.
Sakie Fukushima became one of the first Japanese women to become a director of a major domestic company when she joined the board of chemical and cosmetics company Kao in 2002. Since then, she has served on the boards of nearly a dozen other companies, including Sony and Bridgestone.
To reach that point, she first had to go to the United States, getting degrees at Harvard and Stanford before working her way up to a board position at U.S. consulting firm Korn Ferry.
“I benefited from the fact that I was one of the few women who had served on the board of an American company,” she said. Nevertheless, “I’m sure that my gender was one of the main reasons that some companies asked me to join their boards.”
Fukushima said she had never experienced overt sexism in her work on the boards. But she said that she had been disappointed by Japanese companies’ slow progress in adding women to their leadership, especially given the abundance of good candidates.
Koshi, the lawyer and board member, said she first truly understood the inequality in Japanese society in 2000, when she graduated from college. Japan’s economy was in a deep rut, and recruiters were mostly hiring men.

Still, she managed to find a position at a Japanese law firm. Impressed with her performance, it sent her to Harvard Law School to burnish her credentials, and she was later seconded to a firm in New York.
During Barack Obama’s 2008 run for president, she was impressed by young people’s political activism, something that is relatively rare in Japan. She resolved to return home and work to improve conditions for women.
In 2011, at the age of 36, she became the youngest female mayor in Japan, elected to lead her hometown, Otsu, the capital of Shiga prefecture in western Japan. She went on to build dozens of nurseries in the city, providing more child care options for women who had been forced to choose between working and staying home with their families.
After finishing her second term, Koshi returned to law. When hundreds of women signed up for a seminar on becoming a corporate director, she and Matsuzawa — who has worked in corporate law and government and serves on two corporate boards — decided to start their firm. Koshi serves on the boards of two companies, including a telecommunications subsidiary of SoftBank Group.
The growing pressures to appoint female directors have created an opportunity for Koshi’s firm.
In addition to the Tokyo Stock Exchange’s new emphasis on governance, Goldman Sachs announced in 2020 a global policy of voting against any board slate that did not include at least one female candidate, joining other investment firms that have adopted similar policies.
While Goldman’s move has had little practical effect on the votes’ outcomes, it has pushed firms to reckon with the problem.
“Most of the companies are receptive; they recognize this is an issue, and they’re hoping to resolve it over the next year or two,” said Chris Vilburn, head of Asia stewardship in Goldman’s asset management division.
This June, he said, when most Japanese companies held their annual meetings, Goldman cast 20% fewer protest votes than in 2020.
Still, Koshi said, it is not clear yet whether companies that are bringing on new female directors are actually committed to change or simply trying to meet quotas.
Some companies “just have female directors because the Tokyo Stock Exchange and the Japanese government said so,” she said.
They know that they need women, Koshi added, but “they don’t want female directors to speak up.”