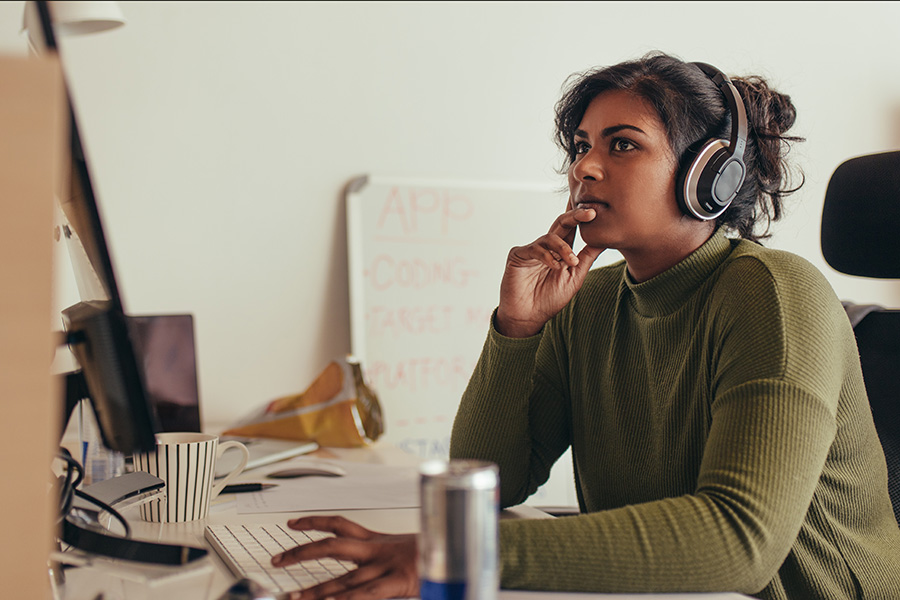 Among the many devastating impacts of the coronavirus pandemic is the stark fact that working women have been disproportionately affected — with four times more women than men being pushed out of the labor force, according to one surveyopen in new window. As the pandemic erodes women’s progress in the workforce, addressing the inequalities they face from the start of their careers becomes ever more critical, beginning with equal pay.

Unfortunately, however, when it comes to working in engineering and tech — fields that offer the fastest growing and highest-paying jobsopen in new window — an entry-level salary for a man is more than $4,000 higher than what’s paid to a woman with comparable credentials. So begins a salary gap that only widens over time, shrinking women’s savings and extending their debt burden.

Stanford researchers who studied this disparity discovered that there is in fact one credential that separates these new hires: self-confidence. Where one candidate guarantees he can prototype and problem solve, the second candidate expresses her doubts. Employers in engineering and computer science fields appear to offer higher starting salaries to applicants who present as self-assured, and those applicants are mostly men. This new research is the first to identify a link between confidence and a pay gap at the start of engineering and computer science careers.

“We see students who have taken four or five years of hard classes, some have done internships, but our data implies that employers are so swayed by the confidence with which these 22-year-olds are expressing what they can do,” says lead author Adina Sterling, an associate professor of organizational behavior at the Stanford Graduate School of Business.

I Believe, Therefore I Can
Overall, the team’s findings point to the hefty role that self-efficacy — a person’s belief in their capabilities — plays in persuading an employer which job candidate will be successful as an engineer, and which will not.

“Confidence is not the same as competency,” says study coauthor Sheri Sheppardopen in new window, a Stanford professor of mechanical engineering. “If you’re judging somebody based on projected confidence, you’re losing out on hiring individuals who are going to be doggone good at the work.”

Backed by a grant from the National Science Foundation, the researchers surveyed 559 engineering and computer science students who graduated from more than two dozen U.S. institutions between 2015 and 2017. They found that women earned $61,000 in their first jobs compared to $65,000 for men, despite having the same degrees and grade point averages. According to the subjects’ answers to questions about their capabilities, the researchers concluded that 2% of the pay gap between men and women could be explained by a gap in self-confidence.

Compared to their male counterparts, women in the survey applying to engineering and computer science jobs reported feeling less sure of themselves when designing a new product or project, conducting experiments, building prototypes and models, as well as other skills hiring managers look for in potential employees. Yet, in actuality, these women possessed the same skills as the male applicants.

The Rising Toll of Losing Confidence
Data has shown that confidence in girls plummets in high school math and science classrooms, even as girls take as many credits as boys — and earn slightly higher grades, according to a 2007 report by the U.S. Department of Education. In addition, girls in high school and college are more critical of their math skills and hold themselves to higher standards. At Stanford, Sheppard notes, the top female students in her engineering classes describe feeling inadequate — also known as the imposter syndrome — every day.

“ you’re judging somebody based on projected confidence, you’re losing out on hiring individuals who are going to be doggone good at the work."
Sheri Sheppard

That lack of self-confidence, prior to the Stanford study, had not been linked to early pay discrepancies. And its impact is significant: “The transition from school to work is unique in that if people can get on the right track, it propels you,” Sterling says. Which means that when women start out $4,000 behind their male counterparts, catching up is nearly impossible.

Sterling and her colleagues have a hunch as to why women end up with smaller paystubs. Women are less likely to negotiate a salaryopen in new window than men. And hiring managers may funnel women to lower paying positions. “Sometimes these career decisions are incremental,” says Sterling. “If you interview and then you get the job, you become an engineer. If you don’t, maybe you become a lower paid lab technician.”

The confidence gap can steer some women out of engineering and computer science fields altogether, positioning them to make even less. Women who go into education, for instance, earn up to $20,000 less annually than they would as an engineer, Sterling says.
Mind the Pay Gap Through a Growth Mindset

But her research and others’ may offer female job applicants in STEM fields a leg up. Stanford psychology professor Carol Dweckopen in new window found that when a girl believes she can learn what she needs to know in science and math, she is more likely to succeed in a STEM field than if she believes a person is born with skills in those subjects. Professors can foster this growth mindset in their female students.

By contrast, Sheppard suggests that men risk feeling overconfident, and she hopes colleagues in engineering departments teach students more balanced self-reporting. “How do people learn to be right confident, the appropriate level, and represent themselves and their capabilities?” she asks. The goal should be that they “not oversell themselves.”

Recruiters also need to reevaluate how they evaluate candidates, Sheppard says. Employers may want to observe applicants performing tasks they’d need to do on the job.

Next, Sterling is studying how internships influence the gender pay gap. Preliminary evidence suggests that when women are given the chance to try out for an organization as interns, they receive higher starting salaries.

“Women are, in a lot of ways, told to discount their own opinions of themselves and to think about everybody else’s opinions of them,” Sterling says. But simply suggesting that women should be more confident doesn’t fly in her book.