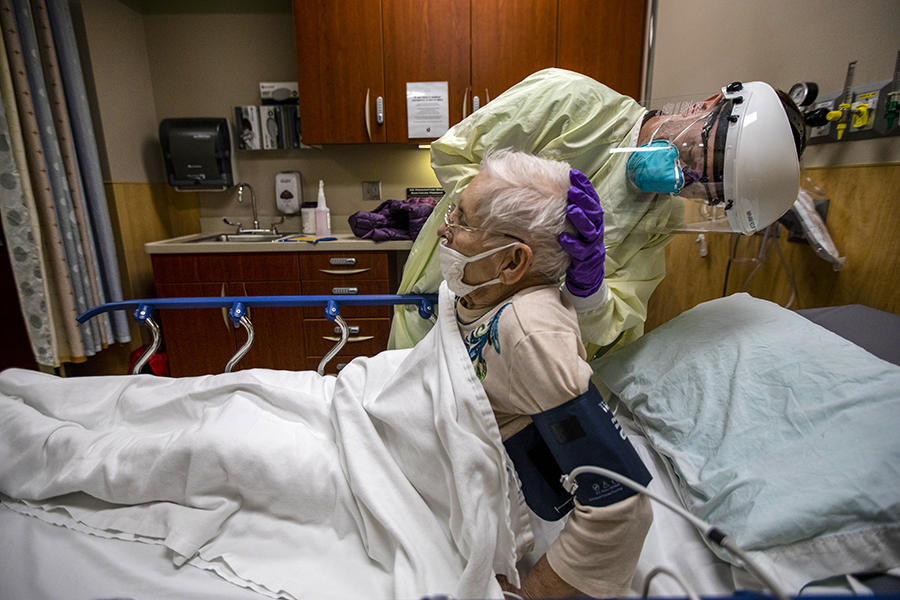 The number of COVID-19 patients in U.S. hospitals has surpassed 100,000 for the first time, nearly double the number from spring during the coronavirus’s deadly first wave, according to the COVID Tracking Project. The Tracking Project on Wednesday put the number of patients at 100,226. The relentless rise in hospitalizations follows a rapid climb in new cases, which now number more than 1 million every week. And deaths, a so-called lagging indicator that tends to spike after a rise in hospitalizations, have also been rising fast. They have now passed 270,000 in the U.S. The numbers paint a sobering picture of what the next few weeks may look like, experts said. Hospitals in some places are nearing capacity, and if states are unable to curb the surge of new cases, those systems could soon become overwhelmed, as New York was in the spring. “Any thinking person has to be worried,” said Philip Landrigan, director of a global public health program at Boston College. “That we have so many hospitalizations speaks to the fact that we have done a very poor job of controlling this pandemic. It is spreading very rapidly, and in many places, it is basically spreading out of control.” Still, the situation today is different from the spring. Hospitalizations are climbing steadily, but they are not keeping pace with the soaring number of cases. The share of people infected with the coronavirus who are admitted to hospitals has actually been shrinking, a twist in the data for which experts offer different theories. One explanation is testing. Many more people today are getting tested than at the start of the pandemic, and that is turning up many more mild cases.. And many of those who do contract the virus become far less sick, said Dr. Caitlin Rivers, an epidemiologist at Johns Hopkins University, meaning they are less likely to need hospitalization. But Rivers does not believe that the share of people who are sick enough to need hospitalization has changed that much. It is just that now they are spread across the United States, unlike in the spring, when they were concentrated in New York and New England. “Now we can see more of the iceberg,” she said. “This spring, you got a test because you were in the hospital and you were already sick. Now you can get tested even if you don’t have symptoms. We are adding to the denominator, but many of those people were never really destined for the numerator.” But others said the shift was more than just increased testing. Dr. Michael Osterholm, an infectious diseases expert at the University of Minnesota, who is on President-elect Joe Biden’s advisory panel for the pandemic, said that he had seen a downturn in hospitalizations over the past few weeks but that he suspected it reflected an attempt by hospitals to manage rising caseloads. “Patients that would have been hospitalized last month today are being sent home and watched closely,” Osterholm said. “Many of our health care systems are literally on the edge. They are in a sense triaging, keeping only the most severely ill patients.” Complicating the situation for hospitals is the fact that with cases now exploding in nearly all parts of the country, health care workers cannot be brought from other states to help, he said. The next two weeks will be critical, Osterholm said. “If we get this Thanksgiving surge, we will have hospitals hit their case cliff,” he said. “Then you can’t have more hospitalizations because there won’t be enough health care professionals to care for them.” Hospital administrators said their staffs were already stretched. Marvin O’Quinn, president and chief operating officer of CommonSpirit Health, which runs hospitals in 21 states, said his system had been drawing from its own outpatient facilities as well as outside companies to meet the growing need for hospital workers. “There just aren’t enough nurses or doctors,” said O’Quinn. “This has escalated around the last two or three weeks.” He said his hospital system is now treating 2,056 COVID-19 patients, the highest number to date and about 65% more than a month ago. About 100 new cases a day are being admitted. He said hospitals in Los Angeles, Phoenix and Omaha, Nebraska, had seen substantial increases in caseloads. “I’m concerned,” he said, adding that he believed the hospitals were as prepared as they could be. “We took the summer to get ready. We knew the fall was coming.”

Tweets by @forbes_india
Photo of the Day: A triumphant Boris Johnson makes UK the first country to authorise vaccine use
Why the U.K. approved a coronavirus vaccine first