Vaccinated travellers will be allowed to visit, EU says

Under the plan, the bloc would accept visitors who have completed their immunization at least two weeks before their arrival, using vaccines from AstraZeneca, Johnson & Johnson, Moderna, Pfizer-BioNTech and Sinopharm 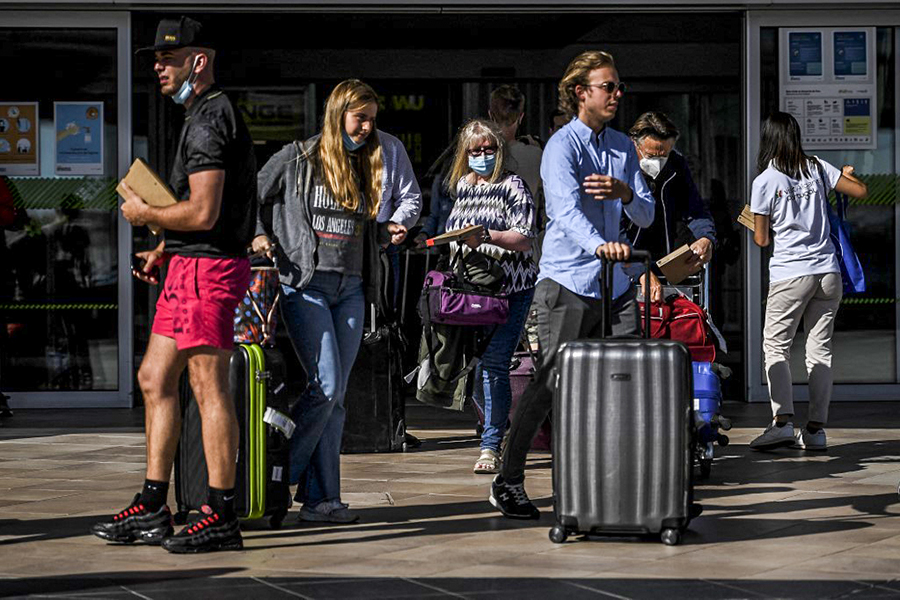 Passengers arrive at Faro airport in Algarve, south of Portugal, on May 17, 2021. - British holidaymakers arrived in Portugal as the country hopes to revive its battered tourism industry after lifting travel restrictions that had been imposed to curb Covid-19. Britons are the biggest contingent of tourists in Portugal, a country whose economy relies heavily on foreign visitors.
Image: PATRICIA DE MELO MOREIRA / AFP
BRUSSELS — The European Union agreed Wednesday to reopen its borders to visitors who have been fully vaccinated with an approved shot and to those coming from a list of countries considered safe from a coronavirus perspective, permitting broader travel just in time for the summer tourism season.
Ambassadors from the 27 EU member states endorsed a plan that would allow visits from tourists and other nonessential travelers, who have been mostly barred from entering the bloc for more than a year.
The move has been seen as an economic imperative for tourism-dependent countries such as Greece and Spain, and it has been months in the works. Other EU nations that are less reliant on tourists for jobs and income, particularly in northern Europe, had been eager to maintain higher barriers for nonessential visitors to keep the coronavirus at bay. But they relented as vaccinations advanced and after they were promised the ability to reverse course if cases surge again.
The new rules are set to become formal policy next week after clearing some bureaucratic hurdles, and, depending on how well each country has prepared to welcome tourists, could be implemented immediately. Some countries, like Greece, have already said that they will remove testing and quarantine requirements for vaccinated visitors. But most countries are likely to implement such changes more slowly and conservatively.
Ursula von der Leyen, president of the European Commission, the bloc’s executive, outlined the measures in an interview with The New York Times in April. The formalization of freer international travel for vaccinated people will deepen the divide between the majority of countries that still have extremely limited access to the lifesaving shots and the few richer nations that do. That is likely to sharpen the debate about how to improve equitable access to vaccines around the world.
Under the EU plan, the bloc would accept visitors who have completed their immunization at least two weeks before their arrival, using one of the shots approved by its own regulator or by the World Health Organization. That covers the vaccines from AstraZeneca, Johnson & Johnson, Moderna, Pfizer-BioNTech and Sinopharm, according to a draft of the rules seen by The New York Times. That would open the door to immunized Americans, who have been receiving shots from Johnson & Johnson, Moderna and Pfizer.
Travelers who have not been vaccinated but who are coming from a list of safe countries would also be allowed to visit for nonessential reasons, such as leisure and business. That list, drafted on the basis of epidemiological criteria and updated regularly, will be finalized Friday.
The draft of the criteria seen by The Times indicated that the list would include nations whose “COVID notification rate” — or the number of new cases recorded over the previous 14 days per 100,000 people — is below 75. Travelers from those nations could still be required to show a negative PCR test to be allowed to enter the European Union.
That bar would be too high for most EU countries themselves, which have notification rates far above 75. Greece, for example, recorded 269 new cases per 100,000 residents over the past two weeks; in Italy, the number was 249. Of the 27 members of the bloc, just three — Finland, Malta and Portugal — are below the bench mark that would apply to other countries, according to data reported by the European Center for Disease Prevention and Control.
And individual EU states would retain the freedom to tweak the measures if they wanted to take a more conservative approach, meaning that some countries could retain demands for negative PCR tests or quarantines for certain visitors.
The draft document of the rules indicated that children would not be required to be vaccinated when traveling with vaccinated parents but that they might be asked to show a negative PCR test conducted no more than 72 hours before arrival.
The bloc would also maintain an emergency brake option, a legal tool that would allow it to quickly snap back to more restrictive travel conditions if a threatening variant or other COVID emergency emerged.
A key question about the practical application of the rules is how the vaccination status of a visitor would be determined.
The European Union has been discussing with U.S. officials the possibility of making U.S.-issued vaccine certificates acceptable in the bloc, even as questions persist about the use of such documents. Those issued so far are vulnerable to fraud.
Europeans will be furnished with digital certificates that will be readable across the bloc sometime in June. The European Union ultimately wants to bridge its own certificates with those issued by the national authorities in partner countries such as the United States, but that goal could be far off.
For visitors from outside the European Union, the draft document of the rules says, “Member states should be able to accept third country certificates containing at least the minimum data set based on national law, taking into account the ability to verify the authenticity, validity and integrity of the certificate and whether it contains all relevant data.”
That, too, would give border authorities in each EU country leeway to accept or reject a vaccination certificate based on whether it looks authentic and contains the information needed.