Scary pictures on cigarette packs, ever increasing taxes, zone restrictions... Governments across the world have tried many tricks to discourage smoking. But do they work?

Say What You Like
Labels like Tobacco smoke can kill babies have been put on cigarette packs for years. But only some countries take note. In Canada, a study found they were widely read and the odds were 1:11 that the smokers would quit. But in China, 70 percent of consumers were numb to those labels. The tradition of gifting cigarettes as a sign of respect and love continued unabated.

Bring on Death
Smokers in India had better prepare to see the picture of a cancerous mouth tumour on the packs they buy. But it will be nothing compared to a brand called Death that achieved a cult status in the UK in the early 1990s. Even its skull and crossbones logo didn’t deter smokers. 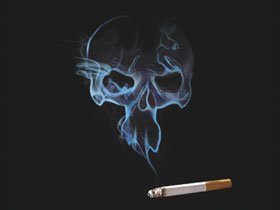 Image: Vidyananda Kamat
Smoking Kills, but who cares?
Step Outside, Please
Bhutan is the only country to ban smoking lock, stock and barrel. France, UK and Germany banned it in public places. India did the same thing, though it’s not clear what is a public space. In Ireland, smoking actually increased after the smoking ban in 2004.
Made for Each Other
US kids in the 1960s were more likely to recognise Joe Camel than Mickey Mouse thanks to the barrage of cigarette ads. But things changed. By 2005, the WHO had cracked down on 168 countries with a treaty ban on tobacco advertising. But nowhere has smoking reduced for want of ads.
A One Rupee Fix
Taxation can control smoking in price-sensitive regions. But in India, while taxes have progressively increased on cigarettes, a pack of bidis is still just Rs. 4 – Rs. 5 and chewing tobacco Re. 1. Let the government keep raising taxes. One rupee can get you all the high you need.
One That Clicked
New York City saw a decade had passed with no decrease in smoking. Then the officials got into the act. Suddenly there were smoke-free workplaces, tobacco education, cessation services etc. etc. In two years, the city had 200,000 fewer smokers.

(This story appears in the 03 July, 2009 issue of Forbes India. To visit our Archives, click here.)