The Return of the Salesman

Why salesmen are again the subject of academic interest

Throughout history salespeople have come in all sizes and stripes—peddlers, drummers, canvassers, agents, sales reps, and of course the iconic door-to-door salesman.

But it's only been relatively recently that historians have focused scholarly attention on salespeople and how they have shaped both business and society. 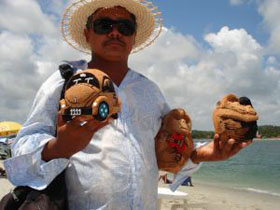 We asked BHR coeditor Walter A. Friedman, whose book Birth of a Salesman: The Transformation of Selling in America has contributed to the literature, to help us understand why salesmen are again the subject of academic interest.

Sean Silverthorne: How did the BHR issue focused on salespeople come about?

Walter Friedman: [HBS professor and coeditor] Geoff Jones and I have been trying to have each issue of Business History Review focus on a theme. In the past four issues we've had one on the late HBS professor Alfred Chandler's legacy, on Latin America, on financial crises (we were lucky to have thought of that over a year ago), and on salesmen.

There's been growing interest in the topic of salesmanship over the last several years. In 2008, the University of Reading hosted a conference called "On the Road: Direct Selling and the Evolution of Modern Marketing." A few of the papers in the issue came from that conference—the article on the selling of the cast-iron stove, America's first consumer durable; and on "sharp dealing" in the British door-to-door vacuum trade.

The larger point of the issue was to begin drawing comparisons of the evolution of salesmanship in different countries. That's why we ran articles about the sale of Singer sewing machines in Japan; the emergence of traveling salesmen in Switzerland; and the place of commercial travelers in British culture.

Q: You mention in your Editor's Note that historians and other scholars have devoted much attention to the subject of selling and marketing, but relatively little to salespeople until the 1990s. Why the initial neglect? What rekindled renewed interest in the peddler?
A: It's as if Arthur Miller's Death of a Salesman (1949) cast a shadow over the profession preventing anyone from seeing its real importance. It didn't help that economists also thought that selling was unimportant in influencing markets and that door-to-door selling declined in the United States in the final decades of the 20th century. But scholars often build on what other scholars have written. Al Chandler included some mention of peddlers and drummers in his 1977 book, The Visible Hand: The Managerial Revolution in American Business. He discussed them, though only briefly, within the larger context of the rise of mass distribution and mass marketing.

As business historians filled out the story of mass marketing, they first focused on the more modern field, advertising. Daniel Pope, for instance, wrote The Making of Modern Advertising in 1983, and Roland Marchand wrote Advertising the American Dream: Making Way for Modernity, 1920-1940 in 1985. Scholarly books on the history of salespeople began to appear in the 1990s, with French historian Laurence Fontaine's Histoire du colportage en Europe: XVe-XIXe siècle, a work translated into English and published by Duke University Press as History of Pedlars in Europe in 1996. This was followed by Timothy Spears's 100 Years on the Road: The Traveling Salesman in American Culture (1995) and my book, Birth of a Salesman (2004). In the past few years, scholars have done a lot of work on 20th-century salespeople in Europe, comparing these experiences with those in the United States.

Q: You identify three historic themes that the BHR essays address: that salespeople promoted innovations; that they acted as brokers of information; and that their activities "embodied the spirit of capitalism in popular culture." Could you elaborate on the importance of these themes?
A: In the early 20th century, a lot of companies that made new products in the field of office machinery and home appliance, for instance, relied on a trained sales force to introduce their innovations to potential customers—the adding machine, cash register, typewriter, refrigerator, and vacuum cleaner, to name a few. Salesmen often explained the features of these machines and arranged terms of credit in case the "prospect" wanted to buy. In some cases, like the refrigerator, manufacturers relied on salespeople to introduce a product, but once it was accepted by consumers, they turned to advertising. In this sense, salespeople played a positive role displacing old products with new inventions.

But a strong sales force could also create a barrier to entry as in the case of IBM. Tom Watson himself noted that even though IBM did not always have the most innovative products, the company succeeded because it had a sales force that could put the story before the customer.

All the aspects of the profession that had to do with promoting change and overcoming resistance made the figure of the salesperson popular to fiction writers—and most of the characterizations have been negative, from jokes about traveling salesmen to portrayals of used-car salesmen on television. The importance of this is that all these negative portrayals have lasting effects on the field in terms of both who goes into it and the general attitude toward salespeople as they go about their work.

Q: The BHR series offers a fascinating international context on the subject. Are there common areas of interest that, at least in the eyes of historians, tie salespeople together regardless of geography? Looked at another way, what did the Swiss traveling chocolate salesman for Suchard a hundred years ago have in common (or not) with his American counterpart hawking Singer sewing machines?
A: I think good salespeople are able to read faces and size up prospects well. They are able to empathize with their customers and to see their point of view. They also have to be able to handle rejection well. I recall that the turnover rates for most door-to-door companies were colossal. Many recruits for Fuller Brush in the early 20th century, for instance, would leave after a day or two.

Then there is the relationship-oriented salesperson. The classic instance of this was the traveling salesman who worked for a New York or Chicago department store and visited rural shops year after year. These relationship-oriented salespeople, often in the business-to-business field, are primarily interested in getting to know their customers and their customers' needs over the years. Hence they have a very different type of sales pitch. Often they make sales calls that don't result in a sale and aren't intended to, but simply to gather information or set up a future deal.

Q: Is there a distinctive "American way" of selling?
A: I don't think there is a distinctive American way of selling, but I find it interesting that sales techniques have permeated American society. In the mid-1920s, Bruce Barton produced The Man Nobody Knows, comparing Jesus to a sales and advertising man. In the middle of the Great Depression, Dale Carnegie, a former Armour salesman, wrote the bestseller How to Win Friends and Influence People, which taught success through sales skills and public speaking. Many self-help books, a very popular book category in the United States, make use of sales techniques.

Q: What are the latest research trends in this area?
A: I think there are two trends. Some people are, as I mentioned, trying to do internationally comparative work that focuses on the evolution of firms in different countries. In this case, the study of salespeople is related to questions of the wealth of national economies and to the competitive strength of multinational firms. Do salespeople play a role in either?

A second trend is to try to place the story of the salesperson within the broader themes of history, including society, politics, culture, and gender. How, for instance, did the experience of women working for Avon differ from those of men working at Encyclopedia Britannica or other sales-oriented organizations?

Q: Any insights into what the current economic downturn will mean for salespeople?
A: Well, if the impression of salespeople was low before the financial crisis, it has only gotten worse. Realtors, mortgage brokers, investment advisors, and telephone solicitors offering credit cards were all part of the problem. But salespeople are also vulnerable in an economy like this, such as car dealerships, for instance, which have closed across the country. And, of course, customers are likely to negotiate for better terms.

Q: What are you working on now?
A: I'm writing a history of the beginnings of the economic forecasting industry. It looks at the first generation of forecasters in the early 20th century, including Roger Babson, John Moody, and economist Irving Fisher. And a group at Harvard published an economic forecasting newsletter in the 1920s, the Harvard Economic Service's Weekly Letter.

Forecasting also has a "sales" angle. It is an industry that is about both "prediction" (that is, devising a way to forecast) and "persuasion" (convincing everyone you're right). The latter skill often proved as important as the former.
About the author

Tweets by @forbes_india
The New Deal: Negotiauctions
Hummers and Saabs From China