A new player, a nascent industry and an astute promoter make this an exciting journey to track 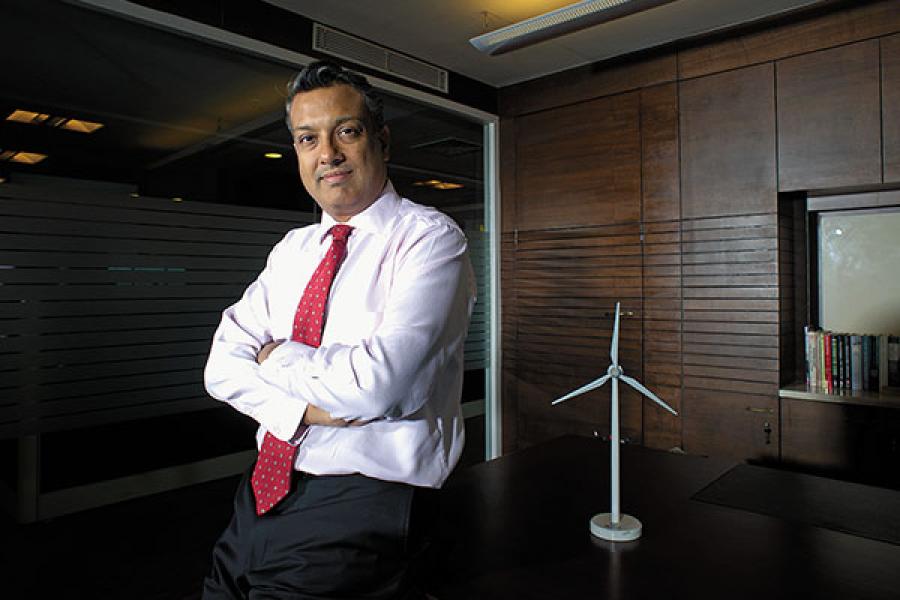 Image: Amit Verma
Sumant Sinha has had diverse experience before turning entrepreneur. He has worked with Suzlon and Aditya Birla’s retail venture

A few years ago, Sumant Sinha found himself in the right place at the right time: Suzlon Energy (right place) and favourable government wind energy policy (right time). Sinha was also, perhaps, the right man because he had the smarts to capitalise on this happy timing. That’s how Renew Power was founded—as an independent power producer (IPP) in India with a focus on generating electricity from wind.

An IPP is not a public utility, and operates facilities to generate electricity for sale to a utility or end user. India has not yet thrown up a wind power utility firm of any scale—Renew Power is in contention. It was founded in 2010 and has an installed capacity of 370 MW (wind farm). It has framework agreements with Suzlon Energy and Gamesa to buy wind turbines.

Goldman Sachs is a majority stakeholder. It put in $250 million in 2011, and in June 2013 another $135 million. This made it the largest private equity investment in India’s renewable energy sector.

The man behind it
Before taking the plunge into entrepreneurship, Sinha was the COO and CFO of Suzlon Energy, India’s largest and the world’s fifth-largest wind turbine manufacturer. In his two years at the company, Sinha played a key role in crisis management. Post the financial downturn of 2008, Suzlon found itself in the middle of an existential crisis—huge debts, tough operating environment and quality problems. Sinha, the son of BJP leader Yashwant Sinha, was instrumental in setting the company’s finances in order. He helped refinance its outstanding debt worth $3 billion, raised extra funds of about $800 million and restructured convertible bonds worth $500 million.

His experience is also diverse. Before joining Suzlon, Sinha set up Aditya Birla Group’s retail venture, Aditya Birla Retail, as its founder CEO. From 2002 to 2007, Sinha was the group’s CFO. His educational pedigree is sound as well: IIT-Delhi, IIM-Calcutta, and Columbia University’s School of International and Public Affairs.

Despite success in the corporate sector, he had a persistent desire to start something on his own. “And I got a lot of confidence by working with Mr [Kumar Managalam] Birla and Mr Tulsi Tanti. I understood how businesses are done, built, and so on. That’s one. Second is the opportunity itself and your own expertise in it. At Suzlon I got an understanding of the renewable energy industry and also saw the market changing from an accelerated depreciation market to a more IPP-based market,” he says. 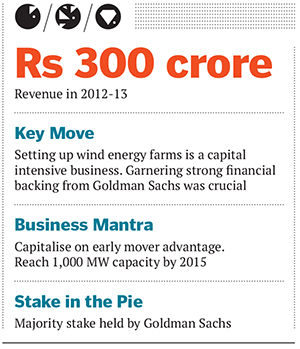 Why it is a gem
Three factors work to Renew Power’s advantage. Firstly, India’s wind energy potential is about 80,000 MW—only 15,000 MW is installed on the ground. And though there are a few players in the fray such as China Light and Power (CLP), Mytrah Energy and Renew Power, there is no large IPP in the business. Add to this are favourable policy changes: The shift from an accelerated depreciation model (used mostly for tax breaks) to a generation-based incentive, renewable energy purchase obligations for state utilities under the National Action Plan for Climate Change (NAPCC) and preferential tariffs from state utilities for electricity generated from renewable sources.

Secondly, with conventional energy sources like thermal and gas more expensive, state utilities are now willing to charge significantly higher tariffs—by as much as 40-50 percent—over the last two years in certain places like Delhi and Rajasthan. Plus, since there is no recurring fuel cost as wind is free, the cost of generating electricity is now at par with a conventional source like coal. So now, the price of wind power is competitive—more affordable in some cases. Consider Karnataka, where the listed off-take price for wind is Rs 3.70 compared to Rs 5 for thermal energy from new coal plants.
Lastly, wind energy is a capital-intensive business and Renew Power has done well to secure finances.

Why it was hidden
Renew Power isn’t too visible primarily because it isn’t a very old company, having completed just three years of operations. Further, there are just a handful of companies in the renewable energy IPP space. The sector, therefore, is still to create a competitive buzz.

Risks and challenges
Building scale quickly is an immediate challenge for Renew Power. Wind energy resources are limited in India (there are no more Class A wind sites) and in the last few years, the IPP space has attracted new players. The speed at which Renew Power puts up MW on the ground will be significant in determining competitive advantage.

Further, setting up wind farms involves two critical elements—land acquisition and access to reasonable capital. With Goldman Sachs behind it, Renew’s capital requirements appear to be taken care of but land acquisition can spring some surprises. Lastly, government policy has a major role to play in wind energy. And that, at the best of times, is not predictable.

Correction: The article has been updated. Sumant Sinha was the CFO and COO at Suzlon and not CEO as stated earlier.

Tweets by @forbesindia
AU Financiers: Making it Easy to Buy Second-Hand Commercial Vehicles
Should You Build, Borrow or Buy?