The lighter, cheaper version of the published word turns 75 this year, and it remains the lifeline for many writers and publishers 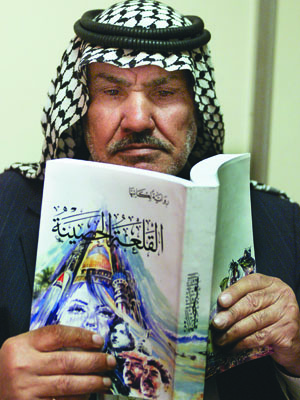 Image: Faleh Khaiber / Reuters
ON A NEW PAGE A 2001 picture of an Iraqi man reading a paperback novel supposedly authored by Sadam Hussein

It was the year 1966, and Paul McCartney wrote a song called Paperback Writer. It was about a writer who was desperate to get his work published. As it was then, so it is now. As it turns 75, the paperback book remains the sure way for a writer to reach the masses.

OK, we are cheating a bit. Strictly speaking, the paperback is a little older than 75. The first paperback got published in 1931. But this pioneering effort by German publisher Albatross Books failed to attract any takers. It was only in 1935 — when Sir Allen Lane launched the now legendary Penguin Books — that the paperback took off. The high quality books priced at 2.5 pence — the same as a pack of 10 cigarettes — were a runaway success. The age of the paperback was upon us.
At that time, paperbacks were associated with cheap science or pulp fiction. Publications like Bantam, Ace, Dell and Avon, which were not really into serious literature, became extremely successful on the back of this medium. They were more interested in selling quick-fix science fiction bought by students near technical schools or by travellers looking to kill some time in the train.
Over time, the paperback widened its appeal to include most bestsellers, reprints of classics and literary fiction. The hardcover version is now reserved for coffee table books or other books that readers are likely to shell out money for.
Charles Stross, a science fiction writer, who has studied the economics of book-selling, says in an article, “a well known international book retailer found out that with every $1 rise above $24, the book sales for a hardcover fell by 25 percent. If you price the same book for $26 then the sales will be actually be 60 percent of the sales that you would do at $24”. So hardcover books are very difficult to sell beyond a certain price. In other words, readers are very sensitive to hardcover prices and the demand is highly elastic. And that is where paperbacks win.
In India, nobody illustrates the paperback phenomenon better than Chetan Bhagat. Each of his three books have sold around a million copies and he is, by far, one of the best Indian success stories as far as paperback English fiction is concerned. This success was primarily due to the pricing which, in turn, was possible only because the paperback format allowed it. Bhagat’s books are sold at Rs. 95 and that has opened a new market.
This is probably the reason why Rupa Publications — publisher of Bhagat’s books — is launching many more authors in this market.  It has figured out a way to cut costs in every respect and has kept the mass market customer in mind. Now, most publishing houses are following suit. Penguin Books has launched Metro Reads, a mass market brand. Most paperback books by Indian writers are sold in the range of Rs. 100-200 per copy depending upon the content, positioning and marketing strategy of the publishing house.
“In spite of changes in technology, or the launch of the Kindle [Amazon’s e-book reader], the paperback will always be there. Apart from some certain specialty publications or certain business books, almost everything is in paperback”, says V.K. Karthika, publisher and editor, Harper Collins, India.
The paperback book is still what it was — bringing pulp and general fiction to the masses at a lower price. Maybe the e-reader will change that. But in India, there is still time for that age to dawn.
The paperback will live on till then. Even beyond the writer who wrote it. Beyond the Beatles that sang about it.