Analytics should be used to drive innovation for real value addition

By U Dinesh Kumar 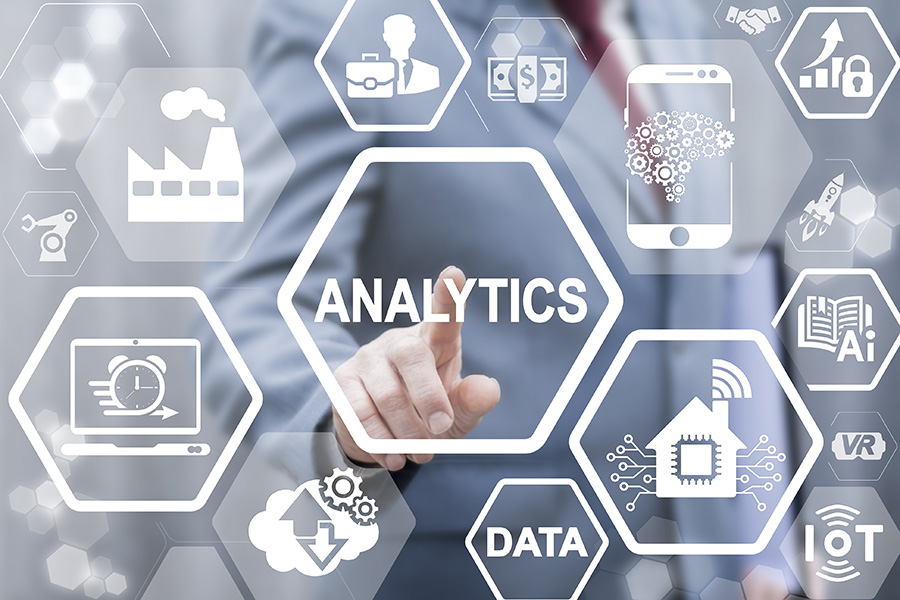 Analytics is a multidisciplinary field that uses expertise such as statistical learning, machine learning, artificial intelligence, computer science, information technology and management strategies to generate value from data. Many organizations use Analytics as a competitive strategy.

Professor Andrew Ng of Stanford University claims that artificial intelligence (AI) is the new electricity.   Data from the World Bank revealed a high correlation between consumption of electricity and human development index score .1 If the development of 20th century can be attributed to knowledge of electrons (electricity), it is believed that the development in 21st century will be driven by AI and how much we understand about neurons, the basic computing elements in the brain and our ability to replicate its function in mathematical models. Many believe in Andrew Ng’s quote that the next wave of development and economic supremacy will be driven by analytics and the ability of an organization or a country to use data to drive innovation.  Given the importance of analytics for economic development, it is important that every country develop its analytics strategy to solve socio economic  issues. 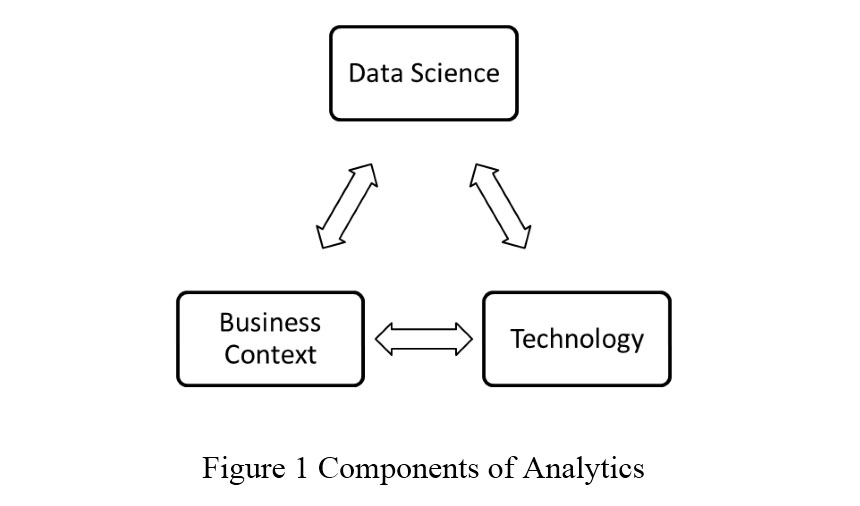 Data is money, that is why we get many mobile apps free of cost, instead of money we pay through our personal information.3 Data Science is an instrument that can be used to generate value from data. Non-availability of data and incorrect use of the instrument is unlikely to create any value to the organization.  The success of any analytics project will depend on the organization’s ability to ask the right questions, which in turn require thorough understanding of the business context. Use of appropriate technology will enable scalability of the solution generated by data science. Analytics should be used to drive innovation for real value addition. For instance, Amazon’s recommender system, which uses analytics at the back end, contributed significantly to its increased sales. Recommender systems are currently used across several industries.  Another innovative application of analytics is Target’s pregnancy test. Charles Duhigg4 claimed that Target’s pregnancy prediction model increased its mom and baby product sales by about 1 billion dollars.  It is important that organizations start with realistic projects rather than starting with “moon shot” projects. For example, Davenport and Ronanki5 talk about how a project to diagnose and recommend treatment for certain forms of cancer using IBM Watson by MD Cancer Centre was put on hold, after spending 62 million dollars and four years of development effort.

In 193 AD, the Roman Empire was sold by Praetorian guards to senator Didius Julianus6 , who spent over a billion dollars in today’s currency to buy Rome only to lose it within 3 months. There are many modern day Pretorian guards in the form of sales force, who are able to sell analytics technologies without much knowledge of data science.  One of the frequent mistakes organizations make in their journey to adopt analytics is believing sales people’s version of the capabilities of analytics technology that they are trying to sell.  Many organizations start “moon shot” projects without understanding the strengths and weaknesses of analytics technologies.

Success Mantra for Analytics and AI
Quality of data and quality of talent are important factors that will decide the success of any analytics project.  Although data collection has become cheaper, manipulating data has also become much easier.  One should carefully examine the data for quality issues such as reliability, bias and completeness.  Jamie Pollock who played as defensive mid-fielder for the football team Manchester City was voted as the most influential person of the last 2000 years in an internet poll, leaving Jesus Christ and Carl Marx to second and third places, respectively.7Jamie Pollock’s achievement was that he scored an own goal in a match between Manchester City and Queens Park Rangers (QPR), which enabled QPR to stay in Division 1 and all the QPR fans voted for Jamie Pollock in the poll, which was conducted immediately after the match.   The moral of this story is that, bad data will result in bad inferences.

Matrix in Figure 2 illustrates the interaction between Data Quality and Talent Quality within an organization. 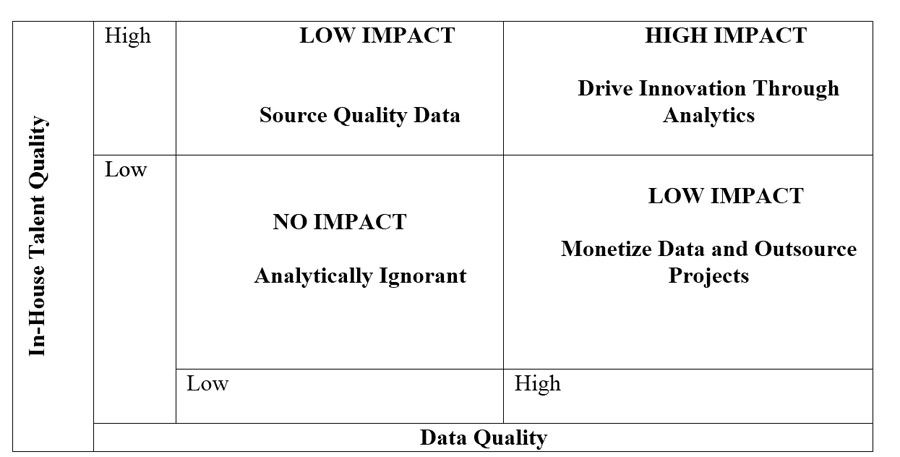 Age of the Neuron and Race for Supremacy
Media reports suggest that China is investing 150 billion dollars in AI-related activities with a hope to achieve economic supremacy in the world.  During the 2018 budget presentation, Arun Jaitley, Finance Minister of India informed that NITI Aayog will start a national programme on AI.  The USA has been seeing large number of start-ups in the domain of AI.  Europe is making significant effort so that it is not left behind in this race of AI-driven economy.  While corporates are trying to develop solutions using analytics that can either reduce their cost or increase the revenue, governments across the world are trying to use analytics for social causes.  I have listed below how analytics can be used by different industries.

Agriculture
Mahendra Dev8 claims that although India has done well on several parameters after the 1991 liberalization, there are a few exceptions such as agriculture and textiles. The agriculture has performed poorly over several years now compared to other sectors. Recurring drought, crop diseases, increasing cost of cultivation due to seed price, pesticide and fertilizer costs, and fluctuation of crop prices are major contributors to the misery of farmers.  Yengkhom9 points out the lack of integrated farm advisory system in India that can advise farmers on issues such as crop selection, crop rotation, irrigation scheduling, weed and pest control, diagnosis and treatment of disease and marketing of crops.  Unpredictability of crop yield, fluctuation of crop prices and lack of guidance on the crops to be grown is leading to severe farmer distress in India and subsequently to many farmer suicides. Analytics can play a major role in developing a farm advisory system that can benefit Indian farmers and increase their income.  This will mean creating an agricultural data lake, which is missing so far.

Healthcare
Healthcare cost has been increasing over the years making it unaffordable for many people.  Ageing population across many countries is also exerting stress on national healthcare systems.  Japan which has the largest proportion of elderly people, has created AI-based robots to provide care to the elderly.  In 2015, the U.S. healthcare costs were 3.2 trillion dollars accounting for 17.8% of GDP.  The healthcare cost was 1000 dollars per person in 2015 as compared to less than 150 dollars in 1960.  In India, the healthcare costs are increasing at an annual rate of 10%, making it unaffordable to a significant proportion of the population.  Analytics can be used to reduce the healthcare costs by reducing the number of diagnostics tests, adopting preventive health care, etc.

Water Resources
Water-related conflicts have become very common and it is expected that several cities in the world including Bangalore will run out of water soon.  Water leakage contributes to as high as 30% water loss in many cities mainly due to breaking of water pipes.  Predictive analytics can be used to predict failures in advance and can reduce the water loss.

Manufacturing
The Manufacturing industry is moving towards industry 4.0, in which automation of various processes is carried out using AI techniques.  Internet of Things (IoT) generates a huge volume of data which can be analysed to improve systems and processes.  The automobile industry is investing heavily in self-driving cars powered by AI.  Traditional problems such as warranty and supply chain management are critical analytics problems for the manufacturing industry.

Banking, Financial Services and Insurance
Innovation in banking, financial services and insurance (BFSI) today is driven by analytics. Apart from traditional issues such as credit rating and underwriting, analytics is playing a major role in business processes associated with BFSI.  The emerging Fintech industry is mostly driven by analytics and several bots are created by Fintech companies for issues such as process improvement, customer relationship management, etc.

Education
Many reports in India have claimed that more than 50% of Indian graduates are not employable. Creating early warning for school dropout, employability of students are few problems that can be addressed through analytics.

The following checklist must be used before starting any analytics project to derive maximum benefit:

1.    Assess the impact of the analytics project in terms of contribution to the overall business objective, top line, bottom line, customer satisfaction, efficiency, etc.
2.    Check the quality of the data available before starting the project.
3.    Check whether additional data need to be sourced
4.    Check whether the solution can be automated.
5.    Develop a portfolio of models and continuously monitor the model performance.

Beginners should target the low hanging fruits instead of investing in expensive technologies. Sales force of technology companies will sell you a black box that more often than not what is really needed.  Open source technologies today are very good at solving many analytics problems and are also scalable.

Tweets by @forbes_india
BookMyShow eyes the big picture
When a competitor abandons the market, should you advance or retreat?