Can one company remain dominant in the ever-changing Chinese smartphone market? 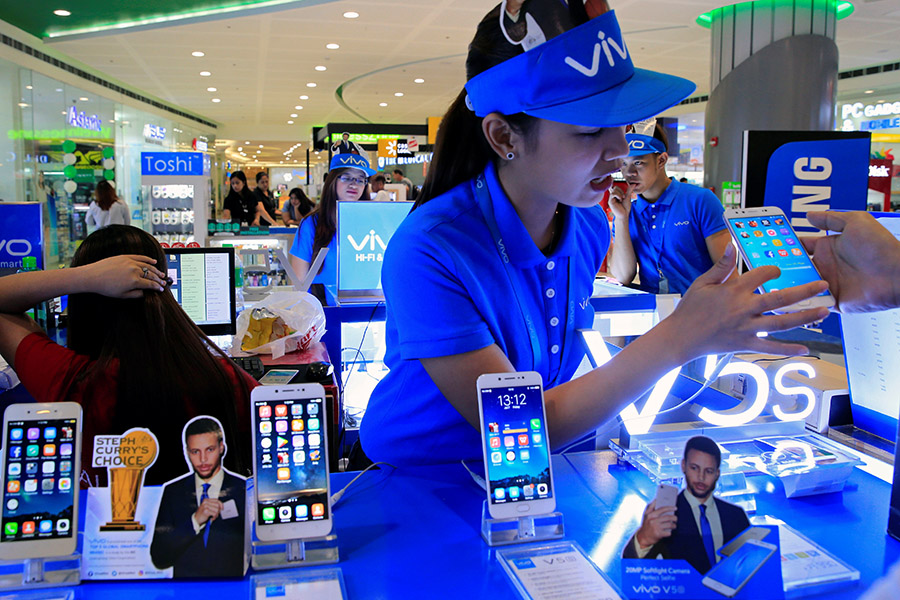 Image: Romeo Ranoco / Reuters
The Chinese market accounted for a third of worldwide smartphone sales in 2016, with about half a billion units sold. However, the size of this market hasn’t offer much protection to market leaders. As recently as last year, newcomers were still muscling in and snatching market share from under the noses of more well-known, established brands.

In the early stages of this market’s development, after the launch of the iPhone in 2007, Apple and Samsung dominated. Then in 2015, two Chinese brands, Xiaomi and Huawei, crashed onto the scene and changed the story. By the end of that year, they had pushed Apple into third position and squeezed Samsung out of the top five.

Just one year later, OPPO and VIVO (together known as OV), two unfamiliar Chinese brands that had nevertheless been cultivating the market for years, overturned the ranking again. OV took first and third positions in 2016, pushing Apple to fourth place. Samsung’s market share shrank to just one third of that of the new market leader OPPO.

And what happened to Xiaomi, briefly the market leader? Well, its business model was built around outsourcing most of its value chain and managing only retail, customer experience and brand image. It sold its products exclusively online and offered extremely competitive prices. However, the strategy later proved to be a huge drawback. In 2016, the Chinese mobile market was booming, and every player was seeking to expand production to meet growing demand. This resulted in a shortage of key components and fierce competition among brands to obtain them. The fully outsourced model meant Xiaomi had less bargaining power than its competitors. And because of a shortage of processors and DRAM, Xiaomi suffered a shipment shortage of 8 million units and its market share plunged.

In this market, it would seem, the business model really matters.

What are OV getting right… for now?
Let’s start with their supply chain. OV have worked hard on cultivating fruitful and respectful relationships with suppliers including Sony for cameras, Samsung for displays and Qualcomm for processors. They are well known in supplier circles, for example, OV will pay for suppliers’ dinner and offer free accommodation to technical staff sent from there.

The support from high quality global suppliers not only helps OV implement their product strategy but also secures delivery support for themselves during the peak season, when component shortages are common among competitors. This helps OV overcome their smaller supplier penetration compared with the global volumes of the competition.

Let’s move on to their manufacturing. Unlike Xiaomi or Apple, OV built up their manufacturing capability from the outset. In fact, OV source every one of their mobile phones from their own factories. There are a number of advantages of this strategy. It ensures product quality, planning and capacity control. Plus, by developing and investing in their own efficient manufacturing, OV are better equipped to respond to increased demand without competing for precious capacity at outsourcers.

Next, there’s the distribution strategy. OV, for now, appear happy to let the other big players battle it out for the sophisticated city consumers’ Renminbi. They, instead, target the smaller cities, towns and rural areas, the so-called ‘tier 3 and 4’ locations. This is backed up with sponsorship deals with pop stars, soccer clubs and TV dramas to appeal to this market. The smartphones themselves are sleek, simple and fast-charging. And most of them are sold via an enviably wide-reaching network of 200,000 reseller retail stores – bigger than that of any of their competitors – supported by warehouses at a local level.

OV are also willing to share profits with their distributors, forming a foundation for a long-term cooperation. The rebate that OV provides to distributors is very high for the industry, ranging from 5% to 10%. This is a powerful motivator for distributors and retailers to promote OV devices.

Now where to for OV?
OV has ambitions outside China. OPPO recently invested $200 million in building a new production site in India, taking its cue from VIVO which set one up in the country several years ago.

However, OV’s strategy of building up proprietary production capacities poses risks. OV has already doubled their businesses in just one year; but such dramatic growth in the future could challenge their 100% in-house production strategy. This could mean they need to collaborate with outsourcers. Furthermore, should business growth slow down or decline, the cost of investing in production overcapacity might be difficult to absorb.

OV need to keep an eye on what the competitors are up to, too. OV might control its manufacturing tightly, but they does not produce every component themselves. They still rely on suppliers for key core components such as processors – and Xiaomi and Huawei are now starting to manufacture these in-house. By investing in such technologies, Xiaomi and Huawei can add new revenue streams and increase their bargaining power with upstream suppliers. OV’s lack of competence in key component technology may expose them to the risk of a supply shortage.

OV’s competence rewarded them with fabulous growth in 2016, but also gives cause for concern. Competitors are starting to build their retail chains around OV. And overseas, a local village-centric distribution strategy might not work as well as in China, where OV benefited from historical business alliances.

How sustainable is OV’s strategy and will it enable them to justify their increased production capacity? With the blend of players and diverse supply chain and marketing strategies, this market is far from settled and big shifts in market share could easily happen in the future. It will be interesting to see how the next year unfolds.