Today, more than a year after the downfall of the Mubarak regime, Egypt needs to build a new pyramid -- a huge task involving parallel processes of political, economic and social reform. It needs leadership that can inspire the nation. Can Egypt find the leadership it needs?

When the Egyptians built the Pyramids, they painted the tops with gold in order to connect with the sun. The pyramids became a symbol of advanced science and a brand that raised the flag of an ancient civilisation and challenged the modern ones. The sky was the limit, and the construction of the Pyramids encouraged clusters of learning, research and the discovery of talent.

Today, more than a year after the downfall of the Mubarak regime, Egypt needs to build a new pyramid -- a huge task involving parallel processes of political, economic and social reform.

For this Egypt needs leadership that can inspire, mobilise and coach the nation. Other emerging powers, for example South Africa and also Brazil, have transformed themselves under inspirational leaders. And in a previous article last July, we identified elements of East Asia’s rapid economic development that could serve as an inspiration to Egyptian policy makers: openness to the world, investment in education, a pragmatic approach, a clear sense of the role of government, and the return of the “brain-drain” diaspora. 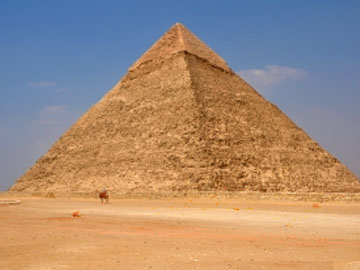 But Egypt has so much to do, and sometimes it looks like mission impossible. At the same time, the construction of the New Pyramid needs to be fast. Expectations are sky high, and people will not wait for the 20 years that it took ancient Egyptians to build the Pyramids. So is the leadership there?

Leaders who are Socio-Economic Architects
Besides having to deliver rapidly, Egypt’s new leaders must pursue a fresh development model that inspires and is inspired by the ordinary person in the street (the bottom of the pyramid). Above all this needs to be inclusive – and seen to be so.

With 40% of Egyptians in rural areas below the poverty line, the new leaders can’t simply focus on the country’s long-term development. They will have to fight poverty every day and achieve tangible results that will improve the quality of life of the average citizen. Above all they must give people hope. Even the hardest of times can be accepted, if there is hope that things will improve – especially for the children and grand-children of the current generations. Hence the need for two parallel strategies: “today for today” and “today for tomorrow”.

A second element should be the encouragement of small and medium enterprises (SMEs). This is in contrast to Mubarak regime economic reforms, which tended to favour large oligopolistic conglomerates and left SMEs suffering from lack of funding and skilled labour. The new leaders will need to develop simplified processes: fast and with only minimum bureaucracy, with government acting as a facilitator and not as an obstruction to SME growth. SMEs can drive job creation as they already do in the European Union, where SMEs employ more than 70% of the working population. And Egyptian SMEs can also act as major driving forces for conquering new markets, similar to the SMEs in the so-called Anatolian Tigers of Turkey. Among other things, Egypt’s leaders have to stimulate and expand micro-financing initiatives to engage the bottom of the pyramid in the new economic era. Inspiration can be sought from the innovative role of micro-financing in countries such as Bangladesh.

Thirdly, the economy needs to be rebalanced. In part this means moving away from the mega projects that have characterised Egypt during the last six decades. The country’s rulers dreamed of big, long-term projects to leave a huge personal legacy. Maybe it is in the DNA of Egyptians to dream of colossal works. But none of these projects gained the support of ordinary men and women. Contrary to the construction of the ancient pyramids, which produced an army of skilled labourers, those projects were mostly delivered with foreign assistance and did little to develop local workforces.

The fourth point is that Egypt does not live in isolation from its regional environment. One of the dynamic effects in the growth of East Asia – which was significantly poorer than the MENA region not that long ago – has been the development of intra-regional dynamics. Many East Asian economies are now linked through global supply chains with their neighbours and hence have access to global markets. In MENA there is no regional economic force to speak of. Having an integrated MENA regional economy will also act as a magnet for foreign direct investment – something Egypt very much needs both as a generator of growth and jobs, and also as a means of transferring technology and know-how.

Good economic reforms will help to sustain political development and stability. But neither political nor economic reforms will be sustainable without social reform. And here the most critical and urgent issue is education, an area much neglected by Egypt’s successive dictatorships. Basic education, primary and secondary, is insufficiently widespread and of poor quality with the result that far too many Egyptians lack the skills required to engage meaningfully in the global economy. Furthermore, in recent decades, the absence of critical thinking in higher basic education has greatly hindered the development of innovators and entrepreneurs. It has also contributed significantly to the brain drain. Not a single Egyptian university features among the top 500 universities in the world. The poverty in skills of Egyptians also means that those working abroad mostly find employment in only the lowest kinds of jobs, hence limiting the amount of remittances sent back home. Much effort will also need to go into raising the status and condition of women.

The new leaders will have to inspire the nation
Success breeds pride and so long as pride does not degenerate into hubris, it in turn can breed success. The successful reforms and consequent growth and development in China, India, Indonesia, Vietnam, Brazil, Mexico and Turkey, among others, have given their citizens a sense of pride. This is critical. Thus, in addition to economic policy, Egypt’s new leaders will have to mobilise the nation behind them. Through thousands of years the ancient Pyramids remained a brand representing great projects telling the story of a hard working nation with highly advanced science and education. In building a new pyramid, Egypt will need to rebuild its brand. The new leadership must aim to inspire confidence and pride among Egyptians in their country, and respect among its neighbours and the wider international community.