Manish Sabharwal: Why the God of Jobs Doesn't Smile on India 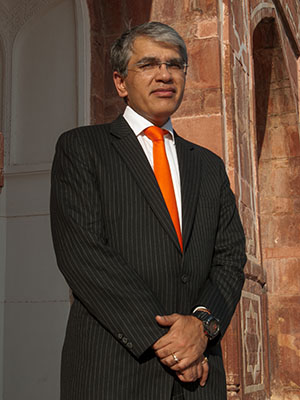 Manish Sabharwal
Profile: Manish Sabharwal is co-founder and chairman of TeamLease Services. He has a management degree from Wharton and sees himself as a crusader for labour reforms in India. Since its inception in 2002, TeamLease has placed more than half a million people in temporary and permanent jobs.


There is a curious acceptance of a hung parliament from the 2014 polls. Even more painful is the omission of a narrative around jobs in the various election narratives being polished and readied: Secularism, socialism, corruption, national security, food and so on. Could these two tragedies be related? Indian policy and politics desperately, urgently and forcefully need to pray to one god—jobs.

India’s labour markets have been stuck for the last 20 years with 12 percent manufacturing employment, 50 percent self-employment, 90 percent informal employment and 50 percent agricultural employment. India has not had jobless growth but 100 percent of the net job creation since 1991 has taken place in the informal sector. Why are we creating so many low-quality jobs? I believe India’s job emergency has five causes.

Regulatory Cholesterol: Philosopher Balzac once said that behind every great fortune lies a great crime. This distrust of the private sector is pervasive in India and manifests itself in thousands of vague, contradictory and unnecessary regulations that smother enterprise. Most toxic is our labour law regime that makes employment contracts like marriage without divorce, ie biased against employers. Without a radical overhaul of our labour law regime—by recognising fixed term contracts, making labour a state subject, reversing over-regulation and under-supervision—we will not reverse the 90 percent informality. And informal employment is the slavery of the 21st century.

Employee Benefits Regime: In a cost-to-company world, benefits are not over and above salary but come out of it. Today the law requires employers to deduct 48 percent of salary towards mandatory benefits for wage levels up to Rs 6,500 per month. Since most employees at low wages cannot live on half their salary, they prefer informal employment. This demand for informality is amplified further by the perception of poor value for two of the biggest benefits: Provident Fund (it is the world’s most expensive government securities mutual fund and its pension scheme has an unfunded hole of Rs 50,000 crore) and ESIC (it is the world’s only health insurance plan with a claim ratio of less than 50 percent). 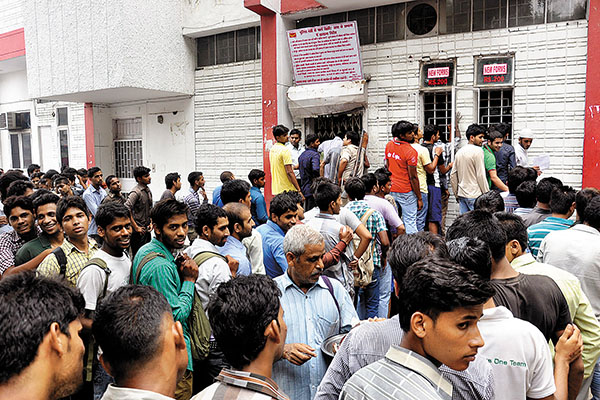 Image: Getty Images
Hopefuls line up in UP for application forms for police jobs. The geography of work greatly affects job creation


Sins of Omission: Economic reforms since 1991 have fixed the sins of commission but not the sins of omission. Entrepreneurs have to substitute for the Indian state by generating their own power, providing their own transport, digging for their own water, arranging their own security and manufacturing their own employees. This not only raises the difficulty level for young people becoming entrepreneurs but ensures that most Indian companies end up being dwarfs rather than babies. The average size of an Indian company is three employees and the policy focus for the Ministry of Micro, Small and Medium Enterprises, unfortunately, continues to be small companies rather than new ones.

Urbanisation: The geography of work greatly influences job creation. India has six lakh villages but two lakh of these have less than 200 people. We only have 50 cities with more than a million people—China has 300. Job creation tends to cluster and the perennial policy dream of taking jobs to people must give way to the urgent reality of taking people to jobs. Consider that unlike the Chinese New Year when 300 million people get on a train to go home, India does not have mass migration at Diwali, Chhath, Christmas or Eid. Urbanisation is a policy orphan in India even though we need 100 new clusters like Gachibowli, Gurgaon, Mohali, Magarpatta and Bangalore that intermingle low rent but high quality residential and commercial spaces.

Foreign Investment Regime: More than 50 percent of China’s exports and 90 percent of its high technology exports come from multinational factories. The biggest value these multinationals have brought to China is not capital but market connectivity, technology and management. Of course, Indian companies should be world beaters but removing all restrictions on foreign investments will greatly accelerate formal sector job creation. Not to mention the huge demonstration and alumni effect of multinationals that will ignite more domestic entrepreneurship of the baby rather than dwarf kind.

Politicians are confused because the traditional narratives of religion, caste and poverty do not inspire the same level of indignation, outrage or action as before. They are looking for a new narrative. When Gandhiji launched the non-cooperation movement, Jinnah told him it would only appeal to the young, ignorant and the illiterate. Jinnah was right: Satyagraha massified the freedom movement because it was a compelling and simple narrative. Gandhiji’s genius was recognising that politics is a battle for hearts and minds. Many current politicians say they believe in economic reform but don’t know how to get re-elected once they implement it. This implies that good economics is almost always bad politics. But a narrative around non-farm formal job creation is a compelling political narrative at the intersection of good economics and good politics.

Tweets by @forbesindia
ZopNow Takes a Crack at Online Grocery
Ajay Shah: The State Should Enter the Picture Only When Markets Fail