As India pursues its lunar ambitions, Prime Minister Modi needs to tackle crucial structural reforms to give the economy its own escape velocity. 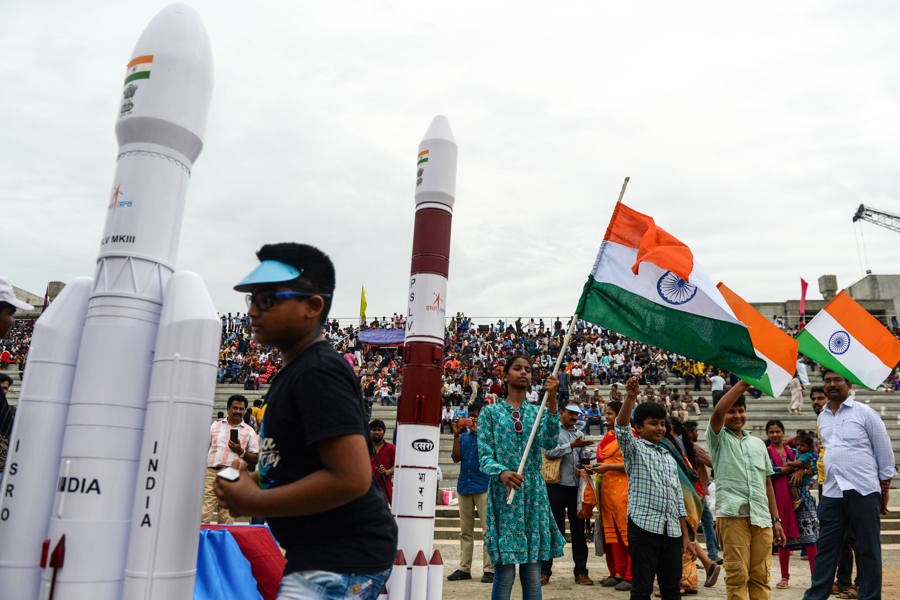 India's second lunar mission, launchedon July 22, failed minutes before its scheduledlanding. Had it succeeded, India would have been the fourth country to land a manmade object on the moon, after the U.S., Russia and China. No doubt India will try again, and one hopes will be more likely to succeed.

To get into space, the first step is to reach escape velocity so a spacecraft can overcome the earth’s gravity. India’s economy needs its own moon shot to break free of poverty and underdevelopment. For the Indian economy, stronger investment and formalizing the vast informal sector are vital to achieving sustainable economic liftoff.

India has suffered from chronic underinvestment for decades. Its poor public infrastructure is a constant reminder. But private sector investment has also failed to keep pace with what is needed to improve productivity and create enough jobs for India’s young population. This is reflected by India’s low capital stock per capita, which stood at just over $10,000 in 2015. China’s, by comparison, was almost four times that in 2015, whereas capital stock per capita in Japan and the U.S. was ten times higher. Total investment in India has also declined in the last decade: from roughly 26 trillion rupees ($355 billion) in 2008, investment was 20 trillion rupees in 2015, the year after Narendra Modi was first elected prime minister and has since fallen to roughly 10 trillion rupees, according to the Centre for Monitoring Indian Economy.

In other words, investment has shrunk 60% in ten years. Underinvestment saps productivity and undermines India’s competitiveness. It also explains the failure of the “Make in India” program Modi launched to turn India into a manufacturing powerhouse. Five years later, India’s imports of manufactured goods per capita from China have doubled, while its manufacturing exports per capita have not increased since 2011. To build a globally competitive manufacturing sector in India requires massive investment in machinery, electricity and water, and improving logistics—roads, railways, seaports and airports.

Along with boosting India’s economic rocket, its load must also be made lighter. India’s vast informal economy—where workers are hired and fired without formal employment contracts and paid a wage without job security or benefits—is estimated to account for 80% of total employment. This situation is a major drag holding back India’s economic takeoff. Given the transient nature of their workforce, employers have no incentive to invest in upgrading workers’ skills, nor to provide them with better tools. As employment is unstable, workers find it hard to save or plan for the future. The informal sector is therefore a productivity trap where wages remain low and worker productivity even lower.

Instead of tackling the twin challenges of underinvestment and the informal economy, past governments have instead tried various combinations of income transfers, subsidies and cheap loans in an attempt to boost individual consumption and to support businesses. These are popular options because they are easier than deep structural reforms, and appeal to the populist impulses of India’s political class. Yet they have never had a lasting impact; the moment government handouts end, consumption slumps, leaving the government with an ever-growing fiscal deficit. The fallacy in this politically expedient approach isn’t merely that it ignores the crying need for structural reform at the taxpayer’s expense, but that it also ignores that it’s investment—not consumption—that drives India’seconomic growth. India’s per-capita GDP (roughly $2,000) is too low for private consumption to become an economic engine with any real power, according to K. Subramaniam, the government’s chief economic advisor. Not until per-capita GDP breaches $10,000 (the level where China is now) can India really start counting on consumption for growth.

Research by Rama Bijapurkar, a prominent analyst at the Indian Institute of Management Ahmedabad in the western Indian state of Gujarat, and author of definitive works on India’s consumer economy, has hown that what people in India typically refer to as the “middle class” is in reality the top 20th percentile of household incomes, people who work in the formal sector with job security, pensions and other benefits. India’s middle class is actually its upper class. And only these households have enough income to boost their discretionary spending. But they cannot carry India’s economy forward.

The vast majority of Indians, including the middle 60th percentile of household incomes, are employed in the informal sector. To escape the low productivity trap, this group needs to be elevated into a genuine middle class, with formal employment and rising discretionary spending power. As of now, the middle class in India has been missing in action. Indian consumers would obviously love to consume more. But they can only afford to do so once they have the more stable and predictable income growth that comes with formal employment.

India’s government, alarmed by a faltering economy that grew in the second quarter at an annualized rate of only 5%, is reverting to its usual consumption-focused nostrums.

But a growing chorus from economists, academics and public policy experts—Bijapurkar among them—is urging the government not to do so this time. Instead, the government needs to tackle the difficult reforms needed to boost foreign and domestic investment and to take measures that shrink the informal sector.

After his landslide reelection victory in May, Modi has a strong mandate to implement such reforms. Many are already underway, such as the biometric-based ID system, compulsory bank accounts for every household, the GST, and legislation establishing a minimum wage that could benefit up to 500 million workers, most of them in the informal sector. This is the time for taking the economic moon shot to launch the Indian economy into a higher, more stable orbit.

Tweets by @forbes_india
Creating your digital business model
Vietjet: How Nguyen Thi Phuong Thao made history with the airline