Kiran Mazumdar-Shaw, Biocon founder and the biggest gainer on the Rich List, calls for a national pandemic preparedness programme in India, and is confident that both her company and the global economy will bounce back soon 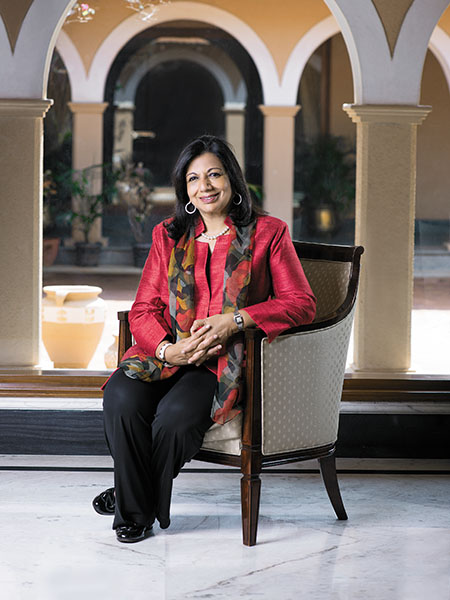 
As the world starts anticipating the possibility of immunising people against the coronavirus infection, the next steps must include building a vaccine preparedness platform, says Kiran Mazumdar-Shaw, founder and executive chairperson of biopharma company Biocon. Eventually, India needs a strong pandemic preparedness programme that will equip the country to react swiftly and effectively the next time there is a viral disease outbreak, she tells Forbes India in an interview.

Preparedness must be top priority, she reckons, because after the first vaccines arrive in the market in India by January or February 2021, it will take another three months to start ramping up in volumes, and until the end of the year for the entire population to be vaccinated.

Biocon’s own efforts to combat Covid-19 include repurposing its psoriasis drug Itolizumab, which was granted permission for emergency use in certain specific cases of people suffering with the coronavirus infection, such as those with acute respiratory distress, the company said in July.

Biocon has since initiated a larger (phase 4) clinical trial on the use of the drug. It is, however, yet to be part of the clinical management protocol of the health ministry, meaning the government has not yet recommended it as an effective treatment for Covid-19. The company is also manufacturing the drug Remdesivir—used for treating people with Covid-19—as part of a voluntary licensing agreement with US-based Gilead Sciences.

In addition to riding the wave that some pharma companies benefited from during the Covid-19 pandemic, several of its own milestones through this year helped Biocon rise in value, boosting Mazumdar-Shaw’s standing among the richest as well. Her rank on the 2020 Forbes India Rich List jumped to 27 from 54 in 2019, making the 67-year-old entrepreneur the biggest gainer among the top 100 in percentage terms (at 93.28 percent). Her net worth nearly doubled to $4.6 billion from $2.38 billion last year.

The Vaccination Gambit
Mazumdar-Shaw identifies four to five challenges that India is likely to face while administering the Covid-19 vaccine. “First, this is the largest adult vaccination programme ever,” she explains. For several years now, India has had a good track record on the orally-administered polio vaccination for children. In that case, with only children, the numbers were fewer compared to Covid-19, and delivery mechanisms were easy enough to train the Accredited Social Health Activists (ASHA) to administer the vaccine at the village–and-community-level.

With Covid-19, most vaccines need two injections to be given one month apart. Some of the vaccines have got adjuvants—substances added to help them work better—making it a complex exercise. Then, the injections are intra-muscular ones, which ASHA workers aren’t trained to give. “We’ll need an army of doctors and nurses. Where will they be available, especially in rural areas... which means we’ll need to deploy students from medical colleges and final-year students of nursing colleges as well,” Mazumdar-Shaw says. Moreover, they will all have to be trained to follow different protocols set for administering vaccines made by different companies.

Next, centres will have to be mapped out for government vaccination drives. Government programmes will need a vaccination schedule or calendar, and people will have to be given vouchers and made aware of when and where they will be vaccinated. State-wise procurement of vaccines, mapping of vaccination centres and scheduling of programmes will require deployment of human resources and technology to capture all vaccination-related data. “We will need that data because there are a lot of unknowns about these vaccines,” Mazumdar-Shaw says, explaining that credible data, which will only be available by this time next year, would be required to determine which vaccine is working well.

A strong pandemic preparation plan at the centre and state-level also needs a robust surveillance programme on [all kinds of] viral diseases. If there is some outbreak in a particular area, “we should be able to pounce on it, find out what it is and contain it”.

Mazumdar-Shaw believes that while vaccines are being developed at an unprecedented pace in the wake of Covid-19, in the future it can be done even faster. “We need to have a semi-prepared vaccine for every kind of virus. And when something happens, we need to be able to get it up to scale within a few months,” she says.

One Year, Many Milestones
Mazumdar-Shaw, who founded Biocon more than four decades ago, making enzymes, has built it into a strong biopharma company that has had some early successes in the field of biosimilars, which is considered to be a growing opportunity. This year, Biocon’s Insulin Glargine, branded Semglee, was commercialised in the US, making it the third product in the collaboration between Biocon Biologics and Dutch company Mylan, to be launched in the US.

Biocon Biologics is a subsidiary of Biocon that focuses on biosimilars. The unit, which may be heading for a public listing, has been valued at $3.5 billion after a $30 million investment by Tata Capital Growth Fund for an equity stake of 0.85 percent during the second quarter-ended September 30.

Biocon’s second-quarter revenues rose, but not enough to make analysts happy, as the supply chain and logistical disruptions from the pandemic hit operations. “Biocon delivered lower-than-expected performance for the quarter, largely weighed by operational challenges,” analysts at Mumbai brokerage Motilal Oswal wrote in an October 23 report, a day after the company reported its quarterly earnings.

But the company remains on course to improve traction in commercialised products and build a product pipeline of both biosimilars and generics, the analysts noted. They cut their earnings-per-share estimate by 15 percent and 10 percent respectively for the current fiscal and the next, “factoring in a delay in the ramp-up of biosimilars (Pegfilgrastim/Trastuzumab) and reduced operating leverage”.

Mazumdar-Shaw tells Forbes India that despite demand being strong, there were logistical challenges. “We could have done better.” That said, she believes that the pandemic has helped her learn many positive lessons.

For one, maintaining business continuity in the face of a global calamity. Biocon experimented with various operational routes during the pandemic. For example, instead of three shifts, the company introduced two long shifts which improved efficiency. Then, based on remote working, it looked at the possibility of four-day work weeks instead of five- or six-day weeks. Mazumdar-Shaw believes that these evolving work models will ease up a lot of operational issues, including employee transportation and related costs. “With fewer people, we are also automating a lot more. Our digital transformation journey is accelerating.”

The pandemic has also resulted in shifting of strategies and timelines. For example, Biocon licensed a digital therapeutics product Insulia and its marketing was going to be a mid-term implementation programme. But now, it’s a near-term plan because the world has gone virtual and the pushback against digital therapeutics has disappeared. “So it’s an idea whose time has arrived quite by chance because of the pandemic,” Mazumdar-Shaw says. Similarly, the pandemic has made e-pharmacies and telehealth extremely popular.

Going forward, Mazumdar-Shaw expects regulatory changes that will help quicker drug development. “We’ve seen that it is possible to shrink regulatory timelines, with this vaccine development for Covid-19. Never in the past have they allowed phase 1, phase 2 and phase 3 trials to be done in such short time frames. Why can’t we follow it after Covid-19?”

This will enable drugs and other medicines to get to the patients faster. In the wake of the pandemic, drug companies have made online submissions that have been simultaneously processed and reviewed by regulators. Other new models like emergency use authorisation should also be developed further, she says.

These shortened regulatory timelines that are helping Covid-19 vaccines get to the market at a faster pace will also help in a speedy economic recovery, even if immunisation of the world population takes a little longer. “I think the global economy will bounce back because once the vaccines arrive, there will be a calming effect,” Mazumdar-Shaw says. “I feel it will happen within the next fiscal.”

The number of Covid-19 cases and the fatalities are now declining because doctors know how to treat the virus better. Many businesses are in a position to become resilient and bounce back fast. Biocon’s own experience is an example, Mazumdar-Shaw says: “We’ve demonstrated that despite the pandemic, we’ve delivered growth. And we’ve seen that our business continuity is very strong. That should give you the confidence that we’ll bounce back really fast—not just us as a company, but as an economy.”

(This story appears in the 20 November, 2020 issue of Forbes India. You can buy our tablet version from Magzter.com. To visit our Archives, click here.)

Tweets by @forbes_india
Podcast: The 100 Richest Indians 2020
Little tags gets awarded as India's most admirable brand 2020