The notion that innovation starts with a sudden flash of insight, an electric light bulb or Archimedes in the bathtub moment, is far from accurate. Innovation takes time and effort. It’s less an idea and more a process. Here are the four big myths which, more often than not, act as barriers to innovation and the development of new concepts and designs.

Myth 1: It’s about a BIG idea
Perhaps the most widespread misconception is that innovation comes from one big, brilliant idea. The odds are that you’re more likely to be struck down by lightning while waiting. Finding an idea is like hunting for buried treasure in a desert. You can wander around hoping to stumble on the treasure or starting digging in one spot and trust you’ll get lucky. A more systematic approach is to dig many holes – in other words to come up with lots of quick, short, descriptions of ideas and work from there. 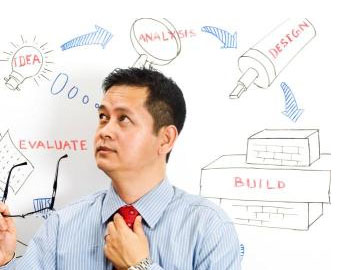 Image: INSEAD
If you look deeper into the creative process of people or industries that make their mark, there is rarely one defining moment. In the pharmaceutical industry for example, people don’t say “Let me come up with the smartest idea for the newest drug”, they come up with hundreds of thousands of compounds and what follows is a systematic iterative process to finally get to a drug that works.

An example of a business that has done very well is Pixar, the computer animation film company responsible for many innovative and financially successful movies. If you look at their creative process, it’s not one person that comes in and pitches a film. There will be dozens of people pitching hundreds of ideas about cars, birds, superheroes. They will select a number of ideas and work on them, developing characters, expanding on the subject before moving onto a plot. The whole process can take three to five years to become a feature film.

Companies and individuals thinking about innovation need to encourage a pool of ideas and adopt a systematic selection and refinement process; a funnel approach converging the multitude of ideas down to a handful of projects that can be pushed to rapid completion.

The challenge in this approach is to broaden the mouth of the funnel, expanding access to new ideas and information, and to narrow the neck through stringent screening processes so limited resources can be spent on selected projects with the highest expected result.

Myth 2: Innovation is about new products or technology
It can be, but innovation can also be focused on improving processes and systems within the company. Business model innovation looks at disrupting the way things are done and bringing in new approaches that contribute to a business’s success.

There’s no argument that Henry Ford made an impact on the car industry, but he didn’t really come up with any new technology. What he developed was a new way of making cars – the assembly line or standardised business model which revolutionised the car industry. Similarly Toyota became famous for introducing the ground-breaking “just-in-time” production approach completely changing management philosophy and practices.

And then there’s Dell Inc. The multinational computer technology firm’s success didn’t come from inventing better computers but from the introduction of a new model of on-line selling and its “build–to-order” model of manufacturing.

Business model innovation entails relatively lower degrees of difficulty and uncertainty than traditional forms of product innovation and demands neither a new breakthrough technology nor the creation of a new brand market.  It delivers existing products based on existing technologies to existing markets. As such it’s inherently less risky than product innovation and can be introduced in both small and large companies and in sectors where other types of innovation often fail. It often involves changes that are invisible to the outside world, bringing advantages that are harder to copy and easier to sustain.

Myth 3: A good idea is instantly recognisable
It isn’t. If you look at data measuring the predictability of a successful idea, it’s surprisingly low, even amongst people who know the industry well.

Nobody knows how the market will respond to a new product or system. It’s a matter of looking at and testing all the ideas, developing those that look the most promising and slowly weeding out those that don’t. As part of the funnel mechanism, mentioned earlier, hundreds perhaps thousands of concepts, are put through hurdles. Does the idea make sense? Is it financially feasible? Assumptions must be tested and ideas taken through market studies and competitive analysis. Along the way ideas are best judged by a diverse group of targets.

Myth 4: Get funding ASAP
Once an idea’s been identified the next step is finding the big money to develop it. The conventional approach if you have a big idea is to go ‘all in’. This may be the case if you’re pressed for time but chances are if you take this path you will lose a lot of money along the way.

Going big makes sense if you know a good idea from bad but as noted a lot of testing needs to be done before this can be assured. Low cost processes have the ability to change and refine ideas through every step of the funnel process, weeding out ideas that don’t work so resources can be focused on the most attractive opportunities. This process is known as “pivoting” and implies the need to stay flexible and let the business model evolve.

There’s a lot of quick, cheap testing that can be done to gather information about what will work and what won’t. A new product to come out of one of the Identifying New Business Models MBA module at INSEAD was Knixwear - sweat resistant, absorbent and odour reducing underwear for women, which shows how fundamental and low-cost testing can be. Variants of the idea were explored using data about women post-pregnancy and by surveying the student population. The product was tested on campus using simple simulations such as moistening the prototype and asking students to wear it and judge its comfort level. Another involved getting people to hold the test fabric on their hand and test how dry it felt and for how long.

The product was later launched through the crowd-funding platform Indiegogo raising $60,450, more than one and half times the target.

The bottom line is innovation takes more than brilliance. It takes courage, it takes time, it takes tenacity and first and foremost it takes action.

Karan Girotra is an Assistant Professor of Technology and Operations Management at INSEAD. He teaches the Identifying New Business Models module, part of INSEAD’s MBA programme and the EMBA module called Key Management Challenges where classes engage in experimental workshops combining approaches to entrepreneurship and innovation.