Organisational politics can be an asset to strategy execution 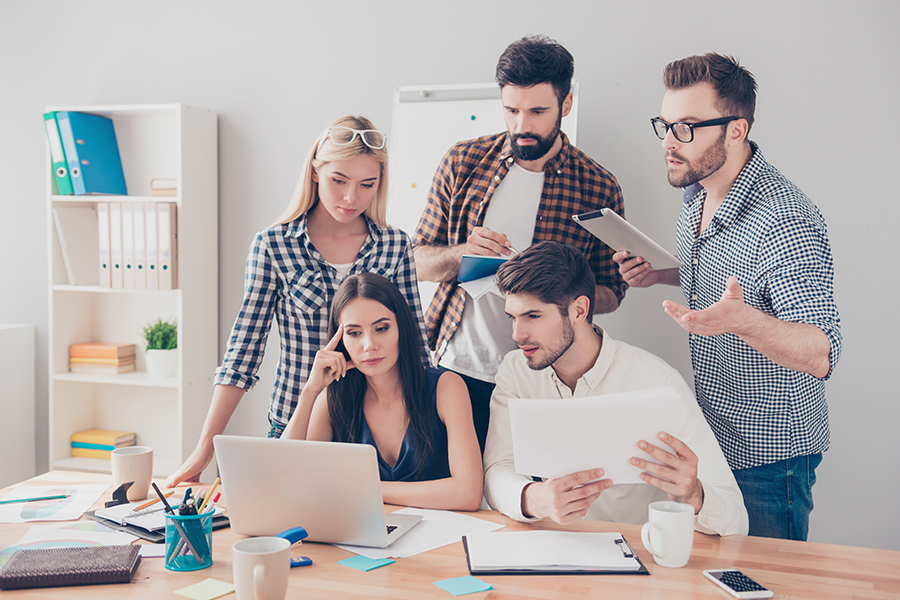 Dysfunctional politics can sink an organisation, but it can also be a force for good. This makes many executives frown, but the reality is that politics is normal – and too often a hidden barrier to effective strategy execution. In fact, without it, some strategic changes may not be possible.

Political behaviour allows differences to be shared and methods to be employed in strategy execution that go beyond the rules and norms of the organisation. Thus it’s important for leaders to understand the forms it can take and how they can harness it.

While we would be naive to ignore the potentially destructive nature of politics, when deployed effectively it can actually help the company meet its strategic goals and live up to its values, especially during change efforts.

Defining politics
Organisational politics refers to a variety of activities associated with the use of tactics to influence or improve personal or organisational interests.

Studies have shown that those with political skills do tend to outperform their politically naive counterparts. However, political behaviour is relative. It is implicit in many cases. For example, it may be the case that a manager or leader needs to exert a large amount of pressure on a team to get something done by using the power of their position over others. It is also occasionally necessary for employees to work behind the scenes to build coalitions of believers in a new vision. Politics is driven by the conditions of scarce resources, social and structural inequalities and individual personal motivations.

Thus, the first step to using politics requires executives to map their organisation’s political landscape and understand the sources of political capital they have.

The political terrain
Most organisational maps are characterised by four metaphoric domains; the weeds, the rocks, the high ground and the woods. Each has a different set of rules for skilful navigation. 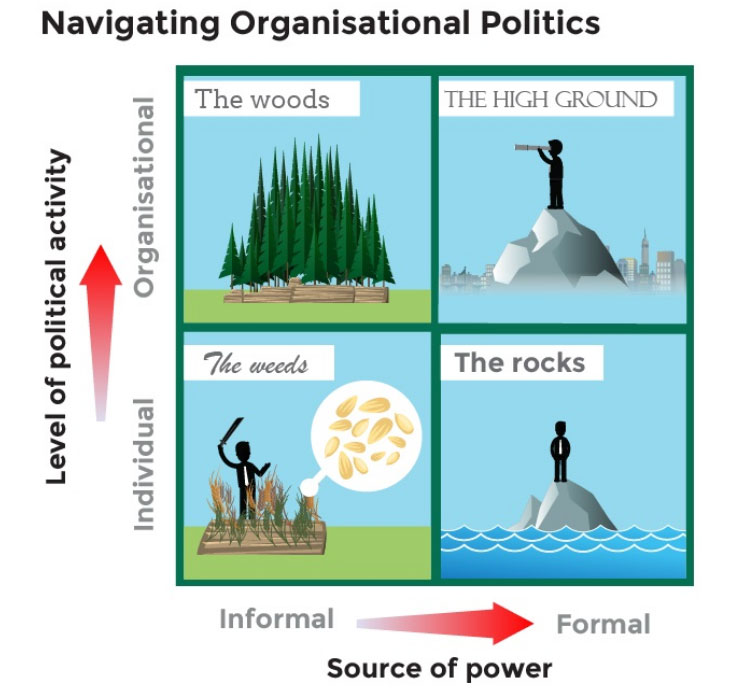 The weeds
In this quadrant, personal influence and informal networks rule. I call it “the weeds” because it’s a dynamic that grows naturally, without any maintenance – which can be a good thing. For example, at one not-for-profit organisation, the Secretary General was seriously underperforming, sometimes acting unethically, leading staff to worry that they’d lose the support of key donors and government officials. So an informal group regularly met to cover up his mishandling of situations. However, the problem became unsustainable and the same group, within the year, helped to ease him out to protect the organisation’s reputation. Thus, the development of an informal coalition saved the organisation and the political activities were a force for good.

The rocks
Power in “the rocks” rests on individual interactions and formal (or “hard”) sources of authority such as title, role, expertise or access to resources. It might also include political capital that arises from membership of or strong ties to a high status group such as the finance committee, a special task force, or the senior management team. I call this “the rocks” because rocks can symbolise a stabilising foundation that keeps an organisation steady in times of crisis. But conversely, the sharp edges of hard power can wreck a plan. Consider a mid-sized advertising agency that was implementing a new growth strategy. The chairman used his power to stop the changes. He would constantly question decisions agreed with the management team, change his mind from one meeting to the next, stop agreed allocation of resources to new structures, and remove people from the special task forces without notification. Here we see the formal use of hard power to satisfy self-interest over the firm’s longer-term value.

The high ground
“The high ground” combines formal authority with organisational systems; I use the term to describe the rules, structures, policy guidelines and procedures that form the basis of political activities. The benefits of these rules and procedures are that they provide a check against the whims of individual level, charismatic or autocratic individuals. This isn’t the “moral high ground,” although it is important for legal and ethical reasons. It’s a functional political process of the structure of control systems, incentives and sanctions that keep the organisation in compliance. However, as many executives know, rules and procedures can also lead to a company becoming overly ‘bureaucratic’, where rules are used as a political device to challenge interests not aligned with the bureaucrats, who may use rules just for the sake of it or to prevent innovation and change.

The woods
In addition to their formal processes and guidelines, organisations also have implicit norms, hidden assumptions and unspoken routines – and that’s where we get into “the woods.” The woods can provide cover and safety for people in your organisation; or they can be a bewildering place where good ideas and necessary changes get lost.

Strong implicit norms can define what is even up for discussion. In some organisations, for example, any display of emotions is seen as socially undesirable. One study shows how implicit processes of ‘normalisation’ of emotions means they remain marginalised or ignored. So the hidden is never raised for discussion. Studies show that in some industries – such as the airline industry – there are “emotional norms” that set the stage for how workers behave and respond to their tasks such as the smiling flight attendant, or even the ‘good cop’, ‘bad cop’ routine in collecting bills.

However, some organisations get lost in their woods. Consider the case of a large telecom company that was in the midst of a restructuring exercise. It needed deep cuts to bring it through a debt crisis caused by falling revenues. The senior director who developed an implementation plan to save the company never once discussed the necessary job cuts with the board. Why? The idea of cuts was not to be spoken aloud.

Understanding the political terrain can help leaders fight dysfunctional politics. But it’s also important to recognise that each landscape also contains positive dynamics. In either case, try to understand the drivers rather than just judge the behaviours. Project leaders who do can avoid the hidden traps of political dynamics, defend themselves against the dark side of politics and use what they know to support wider organisational goals. They will also find it easier and get more skilled in engaging in positive political behaviours at all levels of the organisation. In the next part of this article, we will explore the tools managers need to navigate these four political domains.

Michael Jarrett is a Senior Affiliate Professor of Organisational Behaviour at INSEAD. He is also a programme director of the Strategy Execution Programme, one of INSEAD’s Executive Education programmes.