Most strategies fail to be implemented correctly. The companies that succeed are those which concentrate on creating strategy which has people and implementation at its heart rather than having annual planning exercises masquerading as strategy

The world of business took on a new level of complexity in the 1980s with new analytical approaches to management and regulations that meant managers had even more to think about. With that, came the march of the strategy consulting industry. Consulting boffins sprung up to find solutions and efficiencies for the leaders of the day.

While the big consulting firms were making their mark and fighting over business, Chris Outram (INSEAD MBA ’77), started a strategy consulting company that thought a little differently than the competition. “We were the new guys on the block, we’re insurgents, we’ve always been insurgents and we act like insurgents” he tells INSEAD Knowledge from his office in London. 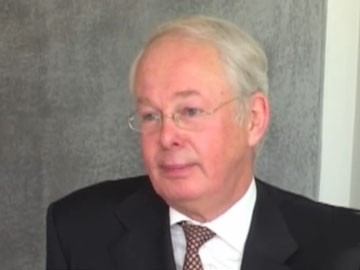 Image: Courtesy INSEAD
Chris Outram, Founder and chairman Emeritus OC&C
Outram purposefully set out to offer a different kind of consultancy to the big players. Almost 30 years on, with 500 employees in 10 countries, he claims that OC&C is probably the only pure play strategic consultancy left.

OC&C has been outrunning the competition in strategic consultancy since it was founded in 1987 by turning the mainstream thinking on its head. He says too many companies fail to realise that implementation is as important, if not more important, than the development of the strategy, something that has recently been empirically proven by INSEAD research.

He argues that much of what passes for strategy nowadays is nothing more than annual planning and says that 75 percent of companies don’t have an explicit strategy process which talks about strategy and how it ultimately depends on people and the way they will implement strategy.

The people element
“I wouldn’t say that their strategies are useless, but if they added a separate ‘people’ process on the strategy process they would be a lot more effective.” That process is execution, which many consultants and academics have largely ignored because it is seen as merely tedious detail.  Yet Outram argues that the only successful strategy is one that can be implemented and having the right people in place is key to that implementation.

The firm he founded, OC&C, makes extensive use of a technique called ‘End-Gaming,’ in addition to conventional strategic tools. “That’s a process where we take the defined strategy, project it forward a couple of years, define what the company will do and look like at that stage and then say ‘have we got the people who are going to do all of this ? And if you’re not sure then you need to do an awful lot of thinking about getting the right people in the right place at the right time.”

OC&C has developed new theories about the best way to ensure that strategy is implemented effectively. The ‘conspiracy theory’ of management is key to successful design and implementation of strategy. “CEOs who gather two or three serious confidantes around them with whom they can kick concepts around, express vulnerability and debate it really do come out with better answers.”


The ripple effect
Then having defined the strategy in a ‘magic circle of executive conspirators’, “it is vital that they live that strategy and communicate it out to the rest of the organisation.” Outram believes that there is a dearth of formal training of managers and CEOs in leadership and communications – ensuring that the key strategic messages get out to the whole organisation.

The conventional model for disseminating that strategic vision to the company is to cascade the messages down from the executive suite. Chris Outram prefers the less hierarchical ‘ripple effect’ model. “I am going to communicate explicitly with different constituencies throughout the organisation, as distinct from hoping that it will percolate down through the organisation and drip feed in the right way. I’m not willing to take the risk that the ‘whispering’ will transform the meaning over time.”

The ripple effect starts in the centre of the pond with the top team where the CEO communicates strategy in great detail. To management generally there needs to be a balance between a reasonably succinct outline of pure detailed strategy and a greater emphasis on how they will implement strategy. “By the time I get to the front end of the organisation, say the people working in stores, I need to give them a very crisp elaboration of strategy and then spend much more time being very articulate about what they need to do help me and the company make it real.”

With people playing such a vital role in the implementation of strategy, Chris Outram believes that putting up with a mediocre team will make strategy unachievable or sub-optimal at best. Companies have to be ruthless when recruiting and retaining staff. “It doesn’t make sense to have mediocre people implementing outstanding strategy, so you have to often make hard decisions to make sure that you attract the right people and ‘Go for Gold.’ I often see CEOs sticking with mediocre people for too long, but frankly they are doing the company a disservice. “

He also warns against the pitfall of overconfidence by CEOs. Even in difficult and challenging markets companies can overestimate the value of their business model, customer base and ways of doing things. He cites the example of failed ‘Blockbuster’ which failed to spot that its business model of DVD rental stores would be overtaken by digital downloads. “You need to be externally very confident about your strategy, but every now and then a bit of paranoia is a very healthy thing.”

Agility and awareness of the changing external environment are also vital if you are to avoid the ten pitfalls that he outlines in his book and which can trip up even the best of strategies. “You need to move with speed and pace so that when change is required, do it quickly, get there first and try and outrun your competition.”