Dealing With the Young at Art 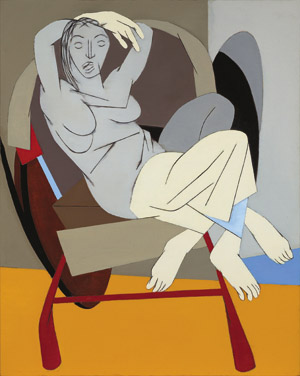 Image: Courtesy: Christie’s
TYEB MEHTA’s Figure on Rickshaw which sold at a record $3.2 million at a Christie’s auction

A painting is not a bond. A sculpture is not a share certificate. You like an M.F. Husain or Tyeb Mehta painting because you can look at it for hours and marvel at the brush strokes that evoke history, politics, religion, philosophy; interpreting the scope of human existence itself within the four corners of an otherwise mute canvas. It is a thing of beauty. And you appreciate it. That is why you are willing to spend a few lakhs or even crores to own one.

It is incidental that over the years, demand for these pieces of exquisite art will increase and the oldest law of economics will kick in, bringing you, what bean counters call, a fabulous return on investment. However, if that becomes the point of buying art, well, what’s the point? But then again, you can’t wish away the market, especially when the reputation of an artist often swells with the price tag.

About seven-eight years ago, Indian art and artists suddenly became cool across the world. Until then, Indian art was defined by a few doyens such as M.F. Husain, Tyeb Mehta, Akbar Padamsee, V.S. Gaitonde, F.N. Souza and S.H. Raza, whom jargon calls the modernists. As global interest in India started to rise with its buoyant economy, young artists became the toast of collectors across the world, bringing them fame and fortune. Some of them such as Subodh Gupta, Bharti Kher, Atul Dodiya, Jitish Kallat, N.S. Harsha, Riyas Komu, Sudarshan Shetty and T.V. Santosh became the flag bearers of Indian contemporary art.

As people began to see the pot of gold at the end of the rainbow, the art appreciating community expanded to include a number of well-heeled spenders who always felt that the cheques they wrote out should return to them as quickly as possible with a couple of additional zeroes.
Opportunists also decided to help those with shallow pockets by floating art funds — if you could not own a whole Souza canvas, you could perhaps lay claim to a corner of it.

Then in September 2008, Lehman Brothers collapsed. The ripples coursed through the art market as well, knocking out its bottom. In India, the effect was particularly severe. Artists who were hot property just months before found no takers. Many art funds bombed and some investors are yet to get back their money. A Delhi-based artist lamented that there were no buyers for a single work of his at a solo show last year.

Some see the downturn as serendipity. Richa Karpe, director at Altamount Capital, a firm that specialises in advising rich families on investments, says that 2008 was good because it brought a sense of reality. “Every artist cannot be a collector’s item 50 years from now,” says Karpe. She says she gets scared when a family asks her to take them around and make them buy art. “It is dangerous territory to get into, as the objective is ‘how much money will I make?’.”

The market has stabilised since those grim days. 2011 has been better for artists, but it came at a certain cost to the contemporaries who have had to settle for lower prices. The section that remained largely unaffected was that of the modernists, says Arvind Vijaymohan, director of Art Ventures, a Delhi-based art advisory firm. 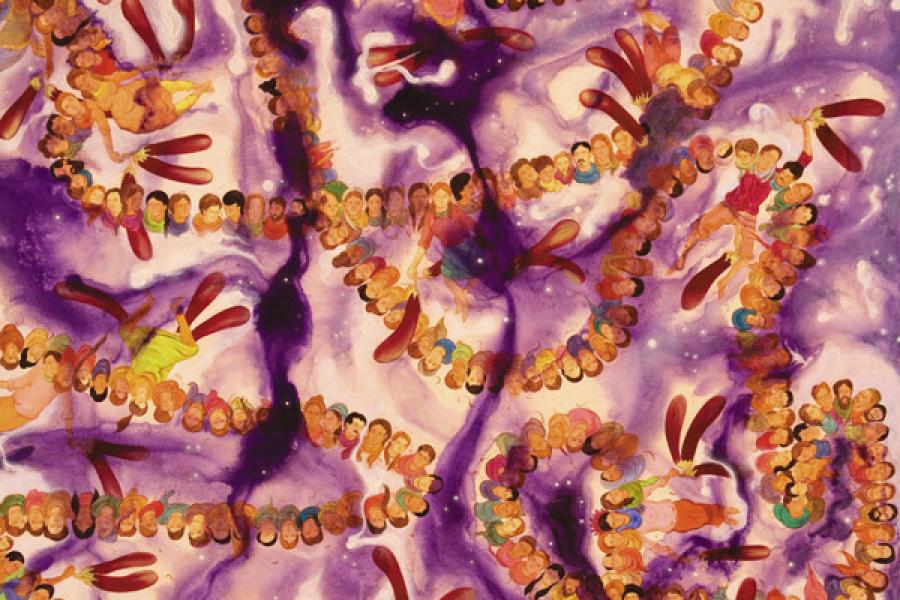 Image: Courtesy: Christie’s
N.S. HARSHA’s Distress Call From Jupiter’s Neighborhood Acrylic on canvas,9.5x5.5ft, Year: 2011
The price-points of rare, significant works by a selection of the important modernists have actually appreciated since the beginning of 2011, and are expected to rise through 2012. Between 2010 and 2011, the international auction market index for two leading modernists, F.N. Souza and M.F. Husain rose by over 60 percent and 80 percent, respectively. Similarly, a Tyeb Mehta work titled ‘Figure on Rickshaw’ sold at a record $3.2 million at a Christie’s auction in June 2011.

“In so far as the contemporary category is concerned,” says Vijaymohan, “there has been a resounding shift back towards quality, with the practice taking precedence over mere production.”

Though their prices were affected, Indian contemporary artists who rode the wave in the middle of the last decade still have headroom because they managed to establish their reputation and their works are already part of many collections around the world. In fact, many works are currently available for a song in the secondary market and astute collectors are making the most of it. “Many buyers are filling gaps in their collections,” says Mortimer Chatterjee, partner of Mumbai gallery, Chatterjee & Lal.

Vijaymohan believes that the period beginning with 2012 and carrying forward till 2015-16 will be the seat of solid opportunity. This period will serve as a juncture from where the current wave of emerging talent will rise and take charge as the new contemporaries.

The economic recession hurt emerging artists the most as their careers were just taking off. They are still struggling.

“It [emerging artists’ works] is not the most fashionable thing to buy currently,” says Chatterjee. Yet, that also means that works of some of the most promising young artists are available at very low prices.

Many of the new artists are exploring themes and concerns that define their own generation. Geeta Mehra of Mumbai-based Sakshi Gallery says that artists are still capturing the spirit of the times. “I think there is very little left to be demystified. There could still be something in the socio-political area which needs to be addressed, like for instance, in the Indian context there are artists, particularly women artists, exploring the theme of gender, gay/lesbianism,” says Mehra.

She points out the work of Tejal Shah exploring lesbianism and Chintan Upadhyay who digs into the idea of cloning and believes it is possible in our lifetime.

Some young artists such as Minam Apang, Rohini Devasher and Nityan Unnikrishnan are getting attention abroad as well. Sree Goswami, owner of Project 88, as well as Karpe of Altamount Capital, pick out Devasher, Sarnath Banerjee, Atul Bhalla and Huma Mulji as some of the most promising artists.

It would be futile to guess which of these artists would be, in stockbroker lingo, multibaggers. The principle should be: If you like it and can afford it, buy it. As Shalini Sawhney, director of The Guild art gallery of Mumbai puts it, “Art is not about money. It is about passion.”