Investing is now fraught with risks, given the instability and lack of political leadership across the world, but it could also be the time to place the right kind of bets 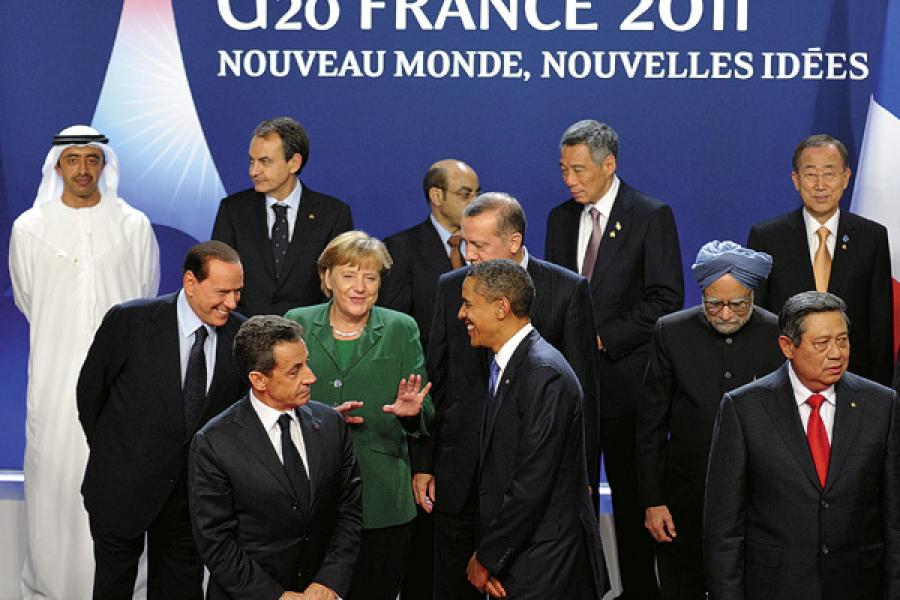 Image: Philippe Wojazer/Reuters
TALKING HEADS Global leaders during a G20 Summit in Cannes. We are at a point when political leadership across the world is at its nadir

Old B-grade science fiction films had a moment when the chief of an alien spaceship walked up to a dazed human with a simple request: “Take me to your leader!” Today, for most human beings acceding to such a request would be Mission Impossible. We are at a point when the political leadership across the world is at its nadir. People have justifiably criticised India while talking about indecisiveness and lacklustre governance, but the virus now seems to have spread to Europe and America. Leaders appear simply incapable of inspiring confidence given their obsession with the quick fix.

Investing in such a situation is fraught with uncertainty. While emerging markets appear to have superior economic fundamentals, there is a strong possibility that their stock market will be affected more adversely.

Here is the perverse logic. In the Western world everybody knows how grim it is, so to that extent the presence of continuing bad news actually causes marginal damage. In the emerging markets, however, confidence till recently was pretty high. Now as that cookie crumbles, many are left wondering as to who ate their biscuit. There is a distinct possibility that stock markets in emerging economies may perform the worst going forward.

Emerging markets are significantly affected at inflection points by capital flows. Given that this is the US presidential year and that Europe is unable to find a solution that actually addresses the heart of their problem, investor confidence may well ebb further.

Closer to home, a weak and divided government is caught between a rock and a hard place. There is now a huge doubt in investors’ minds about the government’s ability to forgo populist behaviour (see the Larry Summers interview on page 56). In 2011, telecom, infrastructure, and retail — each of these sectors held out hope for a sensible solution, yet the wise men fumbled every single time.

The India story largely hinges on the vibrancy of domestic consumption. The naïve belief is that while the rest of the world falls apart, 1.1 billion Indians will continue to consume. It is useful to understand how this myth gained ground considering few had heard of it till as recently as 2004.

With an eye on the votes, the government was desperate to ensure that the ‘trickle down’ effects of growth benefited the lower and middle income populace in rural and semi-urban India. The employment guarantee scheme and the goodies dished out by the 6th Pay Commission vividly illustrate how the plan was executed to perfection.

Bank credit has been another useful weapon in the armoury. At the margin, what has changed is consumer lending; access has increased and it is now most visible in the smaller cities.

What has led to sustained buoyancy in demand for motorcycles, tractors and paints while a host of other industries have received short shrift? Yet, few trees grow to the sky. The domestic consumption story may now have run its course. In fact, some of our problems relate to the National Rural Employment Guarantee Act and other such handouts. Consumption today is stalling because it was given an artificial stimulus in the last two to three years. But now the strain is beginning to show. The Index of Industrial Production is the lowest it has been for 17 months, manufacturing growth has declined sharply and Crisil estimates that corporate sector’s profitability will decline by 2 percentage points; sectors such as hotels, real estate and textiles can see declines of up to 3-5 percentage points. All this means that the demand is slowing down.

So rural credit will grow because agriculture is still doing fine, but industrial credit will likely stagnate. Crisil expects banking sector income to rise only 19 percent as opposed to 41 percent last year, same time. And non performing assets will rise to 3 percent. To make matters worse, inflation will act as a tax on the domestic consumption story. In effect, it widens the gap between the haves and the have-nots with serious negative implications for items of mass consumption.

What does this mean for the person who wants to invest in the markets? Analysis of 15 years of data shows that the Indian stock markets have had a trading range of 15.5-16 in terms of the P/E (price-to-earnings) multiple with corresponding standard deviation of 1.8. If one assumes Sensex earnings at Rs. 1,125 for FY2012 and a P/E of 12 (minus 2 standard deviations from the long-term average), it seems the Sensex has limited room to fall below 13,500. Somewhat quixotically, the smart money is overwhelmed by the “anything can happen” mindset.

History suggests that you could lose money in the short run. However, if you think that 12-24 months is a reasonable timeframe to look at equity investments, then the markets are clearly swinging to the cheap end of the pendulum. If anything, the argument should be that the risks are visible and it is a time to get your feet wet. The really big money is made by placing a high-conviction bet at the point when the gloom is the greatest.

The one surprise could be that if inflation does come under control, it will revive domestic consumption and provide a boost to the Indian economy. That’s the one silver lining to a tumult of clouds. Stay calm. Pick wisely as opportunity knocks on your door.