Research shows that by using sophisticated and advanced LEDs, LiFi can transfer data at a speed of 100 gigabytes per second — almost ten times faster than the fastest WiFi 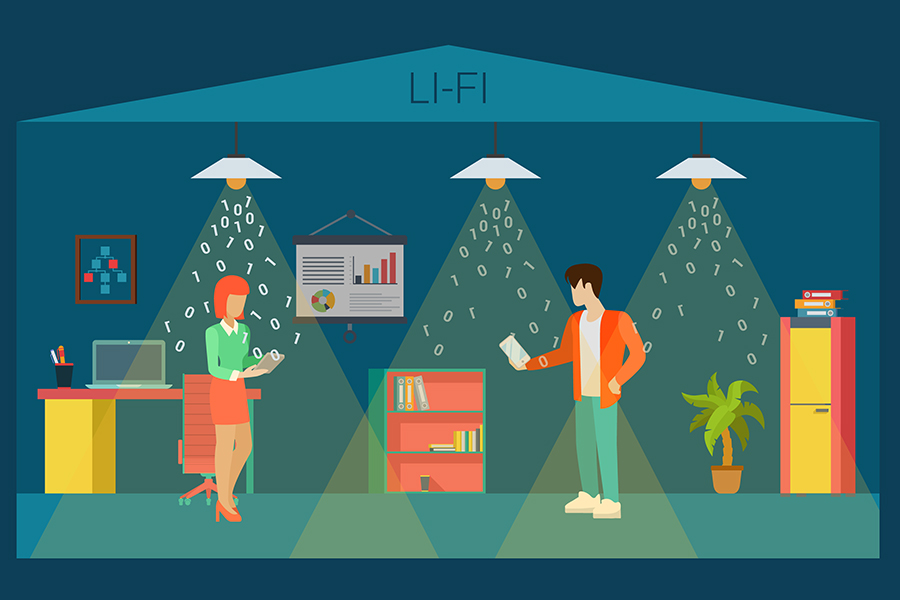 We are currently living in a world that has more data than the human population. Massive amounts of data are transmitted over the internet every second. The emergence of Industry 4.0 technologies and associated applications have paved the way for about 4.6 billion internet users, 5 million years equivalent high-density video transmitted through mobile devices monthly, 80 billion internet of things (IoT) connected devices worldwide – around ten times the world population – exponentially growing data.

COVID-19, in particular, has made our world increasingly contactless, and the internet has become fundamental for the continuity of both business and life. Data transmission through a traditional medium has many limitations in terms of availability, access, efficiency, and security. Here, we discuss an alternate next-gen technology for internet access.

Today most data is communicated through ‘WiFi’ a family of wireless network protocols used to transmit data via electromagnetic signals. In the past several years, WiFi technology has been connecting personal computer desktops and laptops, smartphones and tablets, smart TVs, printers, smart speakers, cars, drones, etc., making the internet communications of big data possible. WiFi connectivity is based on radio waves, a special type of electromagnetic signal wave (with a longer wavelength and lower energy) designed to carry data through the air over relatively long distances. These signals oscillate at a very high frequency, which allows the waves to travel through the air, similar to waves on an ocean, thus enabling uninterrupted data transmission.

How much of the radio spectrum, a naturally available resource that WiFi technology is based upon, is still available to transmit exponentially increasing amounts of data over the internet? Imagine the world when the radio frequency spectrum is completely occupied with no room for internet transmissions through WiFi. This would be a critical challenge for organizations' survival in the post-COVID-19 era, as the internet becomes a digital transformation’s imperative. An overview of the radiofrequency map of developed countries shows that the radio spectrum is pretty full. Put differently, the important resource that has been helping WiFi transmit data over the internet for the past several years and keeping the IoT devices alive is much occupied.

One solution to the above-said problem is to explore the other parts of the electromagnetic spectrum in more detail. While high-energy waves that include gamma and x-rays cannot transmit data over long distances due to inherent shorter wavelengths, the other parts like the ultra-violet and infra-red rays are harmful. However, the healthy alternative that constitutes visible light is another natural resource to look at. While the visible light spectrum appears to be tiny on the electromagnetic spectrum map (in logarithmic scale), on a linear scale, the visible light spectrum is a thousand times larger than the radio spectrum.

Could we offer unprecedented bandwidth to safely transmit data by repurposing the visible light energy we use for illumination to provide wireless communication? LiFi can offer this and more. The application of visible light spectrum to transmit data bi-directionally over the internet is the novel LiFi technology (a term coined by Professor Herald Hass, University of Edinburgh). In simpler terms, LiFi is considered a light-based WiFi that uses light instead of radio waves to transmit data and information. An easier way to understand how LiFi works is to imagine a computer signal getting converted into a light signal digitally (1 when light is ON and 0 when light is OFF) using a light-emitting diode (LED) and transmitted wireless via the visible light spectrum. Research shows that by using sophisticated and advanced LEDs, LiFi can transfer data at a speed of 100 gigabytes per second – almost ten times faster than the fastest WiFi.

Recently, a Scotland-based company - pureLiFi - has already unveiled the world's first LiFi dongle called LiFi-X to apply the above-said theory in practice. By connecting a LiFi dongle to an internet-based device, faster, safer wireless data communication could be experienced. The future would witness this new technology growing into nanochips to embed into the mobile phone devices using the 5G technology.

From the dial-in internet to wired and then to WiFi, the world has witnessed an evolving change. The breakthrough of LiFi will be the future of data transmission over the internet. The inherent problems like data security, limited bandwidth, and paid licenses of WiFi will go away with LiFi based internet. The dysfunctional scenarios of WiFi-based internet like underwater communication, airplanes, and healthcare theatres would not exist anymore, as LiFi would work here.

With the emergence of LiFi and its application to transmit data over the internet, the future of Information and Communication Technologies (ICTs) and IoT will change. With safer and faster connectivity available everywhere, LiFi would enable effective use of other technologies to create smart cities, intelligent transportation, accurate navigation systems, digital supply chains, etc. Alongside domestic use, we see a clear opportunity for LiFi in healthcare, aviation, retail, and telecom sectors worldwide. For example, recently, Nav Wireless Technology Pvt Ltd, a Gujarat-based technology start-up, leveraged LiFi to transmit crucial patient data, such as ventilator reading, temperature, etc monitor COVID-19 patients at hospitals.

Based on the promising potential, LiFi will rapidly emerge as a powerful wireless networking solution to the impending radio frequency spectrum crisis and an aiding technology for the future Internet-of-Everything, to harness the digital transformation post-COVID-19 era.

According to a market research study, the visual light communication market is expected to grow at a CAGR of 96.57% by 2023.  Through LiFi, new business models could emerge that offer a higher data rate for short-distance communication with existing infrastructure. With evidence of LiFi's success in developed countries, it is time for the firms in developing countries like India to see a potential business opportunity with LiFi technology for commercial success and social welfare.

Tweets by @forbes_india
India can be a global leader in building a nature-positive economy
Can wildfires be prevented in a world dealing with climate change?