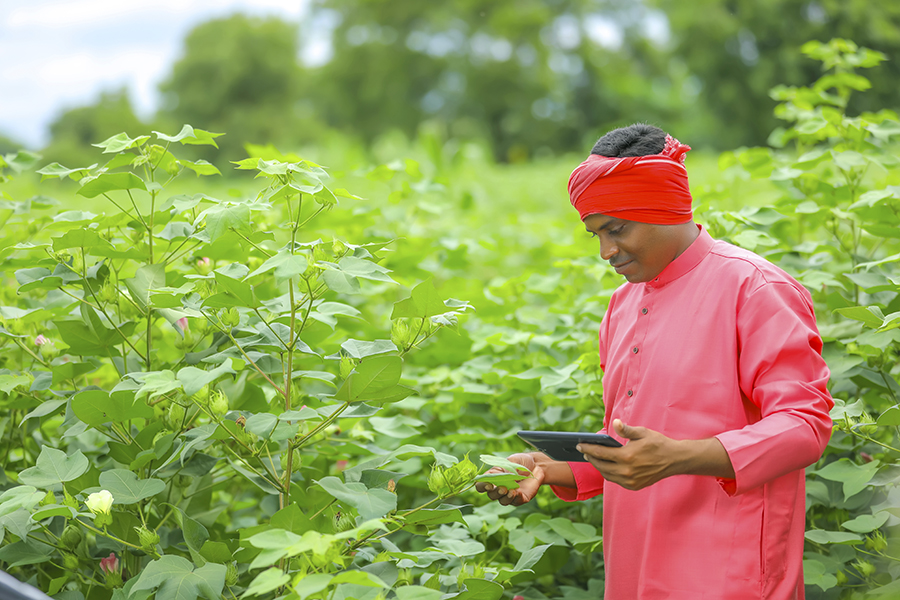 A 30 percent increase in area covered by mobile phones (one standard deviation) was linked to a 1.4 percentage point boost in the fraction of land that farmers planted with high-yield varieties of seeds.
Image: Shutterstock


The gap in agricultural productivity between countries is vast: the richest nations perform about 50 times better than the poorest, which has implications for global income inequality.

Clearly, part of the problem in low-income countries is a lack of money for farmers to invest in better seeds or equipment. But there are other issues at work, too. In a new study, Jacopo Ponticelli, an associate professor of finance at Kellogg, and colleagues suggest that lack of information about agricultural technologies and practices is a major barrier. And, importantly, their research showed that offering farmers on-demand advice over the phone can help remedy this.

The researchers studied the cumulative effect of a pair of government programs in India. One funded extensive cell-phone tower construction, and the other set up call centers to answer questions from farmers about topics such as seeds, fertilizer, irrigation, and pest control. Better mobile coverage was linked to increased use of more advanced agricultural products and techniques, as long as the farmers spoke the same languages as the call-center staff. Most importantly, crop yields rose too.

“Access to information can have a real impact,” Ponticelli says. And the effects were long-lived; the team continued to see productivity gains a decade after the cell-phone tower program started.

Information on Demand
India and other countries have previously provided information to farmers through agricultural extension services. In these programs, advisors travelled to rural villages and explained how to use new technologies such as high-yield seeds or herbicides. The problem was that, after the advisors left, farmers might have had more questions and no easy way to get back in touch with the experts.

For the technology to take hold, “information has to come at the moment in which you need it,” Ponticelli says.

In 2004, the Indian government tried another approach. The agriculture ministry launched a program called Kisan Call Centers (KCC) to offer free advice from agronomists over the phone.

A few years after launching the KCC program, the government started the Shared Mobile Infrastructure Scheme. The goal was to expand cell-phone coverage in rural areas by subsidizing mobile tower construction. (Landline phones were very rare in those areas, and Internet access was practically nonexistent at the time.) With government funding, telecommunications operators built about 7,000 new towers from 2008 to 2010.

The initiatives provided a unique research opportunity for Ponticelli and his collaborators, Apoorv Gupta at Dartmouth College and Andrea Tesei at Queen Mary University of London. Indian government data on mobile tower construction and KCC calls covered a huge area that included about 19 million farmers. And the researchers were able to study the combined effects of the programs over about a decade.

“Has this access to information really changed the local productivity of farmers in a systematic way?” Ponticelli says. Or were any improvements “just a one-off thing”?

Language Barriers
The researchers started by analyzing calls to the KCC program. From 2006 to 2012, agronomists answered about 2.5 million inquiries from farmers. For each call, the agronomist recorded the date, crop, question, and response. At the beginning of the season, farmers often asked questions about seeds; later in the season, their concerns shifted toward fertilizers and pest control.

“There is almost a constant need,” Ponticelli says.

But the effect varied dramatically depending on the languages spoken by residents. India has 22 official languages and about 100 unofficial ones. The KCC program offered advice only in the official ones.

Closing the Gap
Finally, the researchers wanted to know if the improved access to information actually changed the farmers’ practices—and through these changes, increased crop yields.

Figuring this out was tricky because better mobile coverage affected more than just farmers’ ability to reach the call centers; it could also bring new business opportunities and make the area richer overall. If crop yields increased, the improvements might be due to that general trend and not access to agricultural information.

First, the researchers examined official-language zones. Within those zones, they compared the use of various agricultural technologies between areas with zero and full mobile coverage from 2007 to 2012. A 30 percent increase in area covered by mobile phones (one standard deviation) was linked to a 1.4 percentage point boost in the fraction of land that farmers planted with high-yield varieties of seeds. The area in which farmers adopted chemical fertilizers, artificial irrigation, and pesticides also was 1.3 percentage points, 1 percentage point, and 2.2 percentage points higher, respectively, for the same increase in mobile-phone coverage.

Crop yields improved, too, in official-language zones. A one-standard-deviation rise in mobile coverage was associated with 1.3 percent higher yields.

Importantly, these improvements did not materialize in unofficial-language zones.

“When farmers didn’t have access to agricultural advice services, the arrival of mobile-phone coverage alone did not have an effect on their adoption of new technologies or their productivity” Ponticelli says. This finding convinced the researchers that information access, not other business opportunities, had driven the agricultural improvements in the official-language zones.

The team also divided farmers into four tiers based on their productivity prior to getting mobile coverage. The least productive farmers seemed to benefit the most from information access, they found. Mobile coverage could shrink the productivity gap between the best- and worst-performing tiers by 36 percent, the researchers estimated.

A Wise Investment
The results suggest that adding mobile-phone towers to other rural areas, such as parts of southern Africa, could have a real impact on crop productivity—but only if farmers can communicate with agricultural advisors, Ponticelli says. Better access to information could become even more critical with climate change, as farmers struggle to cope with extreme weather.

Compared with other infrastructure such as roads, cell-phone towers aren’t that expensive to build, Ponticelli says. “Returns are quite high for the type of investment.” And higher agricultural productivity “means income, which means less poverty, which means more food on the table.”

Tweets by @forbesindia
Forbes India Disrupting the Discourse: 4 women leaders on economy, jobs, growth
Photo of the Day: Mask up