For instance, on the morning of Jan. 16, during a weekend that brought revolution in Tunisia and continued coverage of the Tucson shooting that seriously injured U.S. Rep. Gabrielle Giffords, eight of the top 10 searches on Google were related to Miss America 2011, who had been crowned the night before. 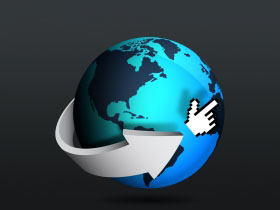 But popular search terms can also reveal hot investments, finds UNC Kenan-Flagler finance professor Joey Engelberg. In recent studies he conducted with University of Notre Dame colleagues, Engelberg discovered that stock ticker symbols searched for frequently on Google can forecast a bump in the company’s share price over the next two weeks.

“Search volume index” or SVI, as Engelberg calls it, could even be a sharper measure of near-term stock performance than more traditional measures such as news headlines or trading volumes. That’s because current “proxies of investor attention,” or ways of measuring investor interest in a stock, make the assumption that if a stock was heavily traded or its name was mentioned in The Wall Street Journal, investors actually paid attention to it. But a story in a major newspaper doesn’t mean investors actually read it; likewise, a big bump in trading volume doesn’t necessarily mean anything notable is going on.

“If a CEO wants to put his kid through college [and sells a bunch of shares], that doesn’t mean a lot of people are paying attention to the stock,” says Engelberg.

SVI, meanwhile, measures something investors are directly doing. While a stock owner searching for AAPL or MSFT is not necessarily about to buy shares in that company, Engelberg and his fellow researchers found there is enough of a correlation between the two that watching ticker symbols on Google Trends can predict short-term run-ups in a stock. It also indicates heavy interest by “retail,” or individual investors, rather than professional money managers.

“An institutional investor is not going to type a ticker into Google,” Engelberg says. “If a lot of retail traders run in and buy, that might push prices up temporarily.”

Indeed, Engelberg’s research found that after the initial two-week pop following heavy search volume for a particular symbol, stock prices for that company often trended downward over the next year.

As a result, the most likely users of this piece of research are not fundamental buy-and-hold investors. Rather, hedge fund managers, who can bet against a stock’s rise (known as shorting) are one of Engelberg’s most likely audiences. Such investors also like to avoid holding stocks too heavily favored by individual shareholders – derisively known in the industry as “dumb money” since amateur investors tend to buy stocks after they’re already overvalued. In fact, one of the largest hedge fund companies in the country is already using Google Trends data as a trading metric after hearing about Engelberg’s paper.

Engelberg was aware of the data Google Trends captured, and he and his colleagues had considered looking into how it correlated with the market. But it wasn’t until the scientific journal Nature published a report connecting Google search trends with flu outbreaks that the actual concept for the research

The paper, which is forthcoming in the Journal of Finance, was Engelberg’s first look at the connection between Google search trends and stock performance. More recently, he’s expanded this line of research to include not just stock tickers, but product names such as iPads or Xboxes.

In a second paper, the trio found that significant increases in searches for a particular product name predicted that company’s next earnings announcement would include higher sales than analysts had previously estimated. Prior academic papers have forecast so-called “revenue surprises” by looking at everything from patents to customer satisfaction scores to even a manager’s tone of voice during earnings announcements.

But comparing Google search volumes is new. “What’s different about search volume data is it comes from customers, not from management,” says Engelberg. “If you’re worried that management isn’t telling you the truth, it has some potential advantages.” He sees this study as being useful for a different class of investors, such as analysts and portfolio managers doing more fundamental research.

Engelberg, whose research focuses on the intersection between media and finance, believes his search term studies should become more useful as the amount of news, information and data proliferates. In his past research, he says, “I’ve focused so much on the supply side of media—the amount of news that’s out, how many articles there are, what the sentiment of that article is,” and how those issues impact stock performance. “This study focuses on the demand side – how many people are going out and actually taking in that news.”

At a time when there’s far more news and information to be taken in, research like Engelberg’s should become more and more critical to investors trying to cope with the information onslaught.