In their forthcoming book, Good Economics for Hard Times, Nobel Laureate economists Abhijit Banerjee and Esther Duflo warn that the space for further growth in economies like India shrinks with time 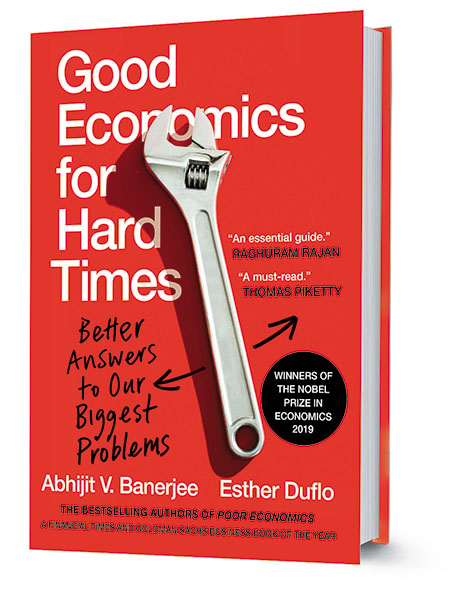 If a fundamental driver of economic growth is resource misallocation, it opens the door to various unorthodox strategies to make growth happen. Such strategies are meant to respond to the particular way in which resource use in a country is distorted. The Chinese and the South Korean governments did a good job of identifying sectors that were too small and therefore not meeting the economies’ needs (they tended to be heavy industry providing basic raw materials to other industries, like steel and chemicals) and directed capital toward them through state investments and other interventions. This might have sped up the transition to efficient resource use. That it worked in those two countries does not necessarily mean it is something every country should emulate. Economists tend to be very wary of industrial policy, for good reasons. The history of state-directed investments is not one that inspires confidence; judgments are frequently bad even when they are not actually deliberately distorted to benefit someone or some group, which is often. These are “government” failures just as there are market failures, and there are so many instances of these that it would be very dangerous to blindly rely on governments to pick the winners. But there are also so many market failures that it makes no sense either to rely on the market alone to allocate resources to the right use; we need an industrial policy designed that keeps in mind these political constraints. Another implication of the idea that growth is slowed down by misallocation is that countries like India that are growing fast right now should fear complacency. It is relatively easy to grow fast, starting from a spectacularly messed-up economy, because of the gains from better resource use. In Indian manufacturing there was a sharp acceleration in technology upgrading at the plant level, and some reallocation toward the best firms within each industry after 2002. This appears to be unrelated to any economic policy, and is described as “India’s mysterious manufacturing miracle.” But it is no miracle. At its root, it is a modest improvement from a dismal starting point, and one can imagine various reasons it happened. Perhaps a generational shift, as control passed from the parents to their children, often educated abroad, more ambitious, and savvier about technology and world markets. Or the effect of the accumulation of modest profits that eventually made it possible to pay for the shift to bigger and better plants. But as the economy sheds its worst plants and firms, the space for further improvement naturally shrinks. Growth in India, like that in China, will slow. And there is no guarantee it will slow when India has reached the same level of per capita income as China. When China was at the same level of per capita GDP as India is today, it was growing at 12 percent per year, whereas India thinks of 8 percent as something to aspire to. If we were to extrapolate from that, India will plateau at a much lower level of per capita GDP than China. The growth tide does raise all boats, but it doesn’t lift all boats to the same level—many economists worry that there may be such a thing as the middle-income trap, an intermediate-level GDP where countries get stuck or nearly stuck. According to the World Bank, of 101 middle-income economies in 1960, only 13 had become high income by 2008.122 Malaysia, Thailand, Egypt, Mexico, and Peru all seem to have trouble moving up. Of course, there are many pitfalls in any such extrapolation, and India should treat it as what it is: no more than a warning. It is quite possible that India’s growth, in spite of all of its problems, has very little to do with some special Indian genius. Instead, it has a lot to do with the flip side of misallocation: the opportunities of being an economy with a large pool of potential entrepreneurs to draw upon and lots of unexploited opportunities. Excerpt from Good Economics for Hard Times: Better Answers to Our Biggest Problems, authored by Esther Duflo and Abhijit Banerjee, published by Juggernaut Books

Tweets by @forbesindia
Concerned About Hypertension: Watch Your Alcohol And Salt Intake
4 Steps to becoming a more self-aware leader