Indian IT services sector: Time for a reboot

It's set to grow by 7-9 percent, according to Nasscom; companies need to transform themselves quickly as demand for digital services rises 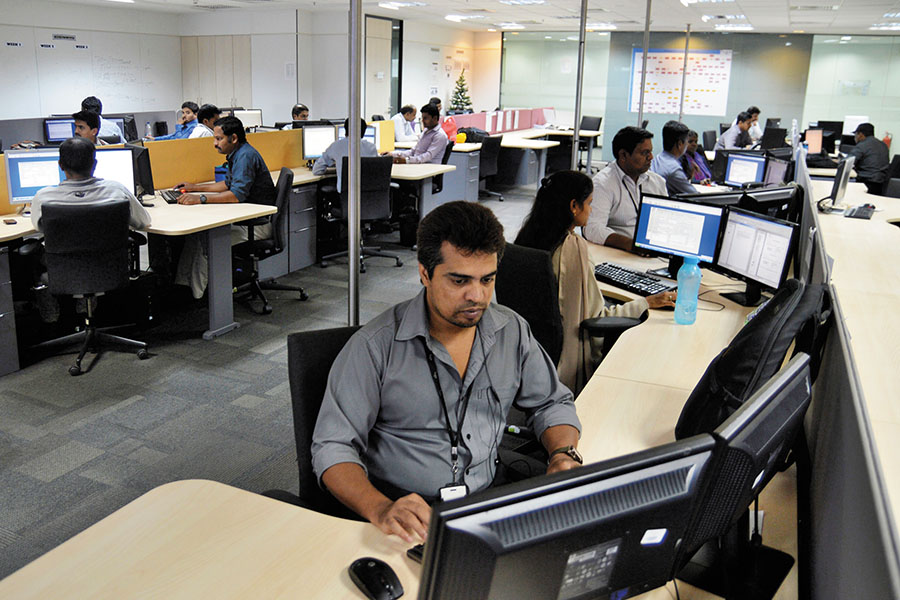 There is increasing demand for migrating work to the cloud or building quick solutions to meet customer needs
Image: Reuters

Indian IT industry leaders believe that it is possible to grow at a modestly faster clip in the next fiscal year, starting April, as the demand for digital services rises, and companies build their capabilities.

“The headwinds are very much there, and the uncertainties remain,” R Chandrashekhar, president of the National Association of Software and Services Companies or Nasscom, the IT industry’s lobby, told reporters in Hyderabad at its annual leadership summit on February 20. “The good news is that the digital component is growing much faster. It is becoming a bigger part of the future.”

The sector is expected to see IT services exports rise by as much as 9 percent over the current fiscal that ends on March 31, while the lower end of the projected range is 7 percent growth. India, as a market, is expected to see tech services rise by 10 percent to 12 percent as large, listed companies in the country accelerate digital tech spending, according to Nasscom.

Digital services, on the other hand, could grow as much as two times faster than the IT industry’s overall growth, Chandrashekhar said. This is because demand is jumping for migrating work to the cloud or building quick, point solutions to meet urgent end-customer needs—such as a dedicated chatbot at a bank or a rapid-prototyping virtual twin of a machine component for a manufacturer. 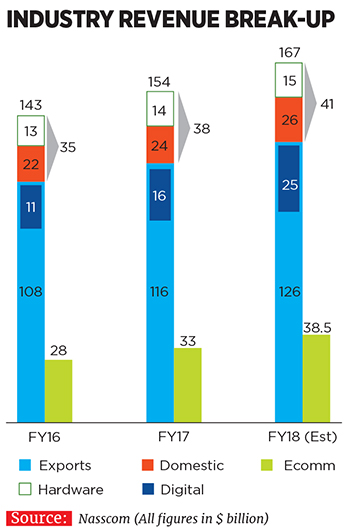 The software and services industry is projected to finish the financial year ending March 31, 2018, with sales of $167 billion, which represents a 7.8 percent rise in exports and a 10 percent growth in the revenue contribution from India, the domestic market. IT services exports are projected to add $10 billion during the fiscal year, to touch $126 billion.

The US is the IT industry’s biggest market, accounting for typically two-thirds of the biggest Indian IT companies’ revenues. However, if one looks at the impact of the immigration issues—while actual laws that require members of the upper and lower houses to pass them have not been made—“there have been a number of executive measures”, Chandrashekar said.

These have made it more difficult and expensive for the Indian IT companies to use the H-1B visa—a non-immigrant work visa that can last as long as six years—to send temporary workers from India to work at client sites. While each of these measures may be small, and even “unquantified in terms of how much change they will bring about”, collectively, they have put a “considerable amount of pressure” on the industry, the president of Nasscom said.

“The fact is that there is huge shortage of tech talent in the US,” Rishad Premji, chief strategy officer of Wipro, India’s third biggest software services company, said at the press conference. Premji is the vice chairman of Nasscom for the current fiscal year. While 70 percent of the visas go to Indian nationals, the Indian tech companies use only 20 percent of the total visas issued, he said.

In the days to come, the industry, through Nasscom will work on “changing the narrative, focusing on the value that the IT companies bring to US companies and companies globally”, Premji said.

To remain relevant as such value creators to large customers in the US and Europe, as well as other emerging markets, tech services companies need to transform themselves with “high velocity” and give up “incrementalism”, Vineet Nayar, former CEO of HCL Technologies, told Forbes India in a recent interview. “Legacy is a drag on our future,” Nayar said. “Because the country is old, the legacy in the social sector is a drag, and because our IT industry is now old, the legacy is a drag.”

At Hyderabad-based Cyient, MD and CEO Krishna Bodanapu recently sold the company’s IT services unit, seeing it as a commoditised area where there is little differentiation between companies in terms of the services they provide. Bodanapu is now focusing on designing, building and operating large telecom networks as one line of business. And managing the entire lifecycle of complex products as the second —from the drawing board to new iterations and so on, including actually manufacturing some of the products, at the company’s two factories in India and one in the US.

The software and services industry is projected to finish the financial year ending March 31, 2018, with sales of $167 billion

“The shift is going to happen over a period of time,” says Bodanapu, who expects there to be at least a five-year window in which the Indian tech services companies can ratchet up their capabilities. “If the companies are smart about it, the opportunity is quite significant,” he says. This is because multiple technologies will get more embedded in everything that we do in our daily lives, he says.

This embedding won’t just take jobs away, but also make them more productive, and give people the tools to be more creative and innovative in their existing jobs, he says. At Cyient, where digital maps have been a line of business, and the number of people working on the navigation business has remained more or less constant, at about 1,000 people, the revenue has increased five-fold in the last decade and the output has probably grown by about 20 times, he says.

Such change has been the consequence of a combination of multiple technologies, he pointed out, including the availability of large amounts of data, and rapid advances in our ability to process them.

Earlier, at a panel discussion at the Nasscom summit, Rishad Premji observed: “If you look at the last two years, the world has become more data rich. It has become truly mobile-first and organisations are at the cusp of digital-at-scale.”

Tweets by @forbesindia
Successor's dilemma: To or not to take over an unethical family business
Bhavin Turakhia thinks his next startup is ready for users to Flock to