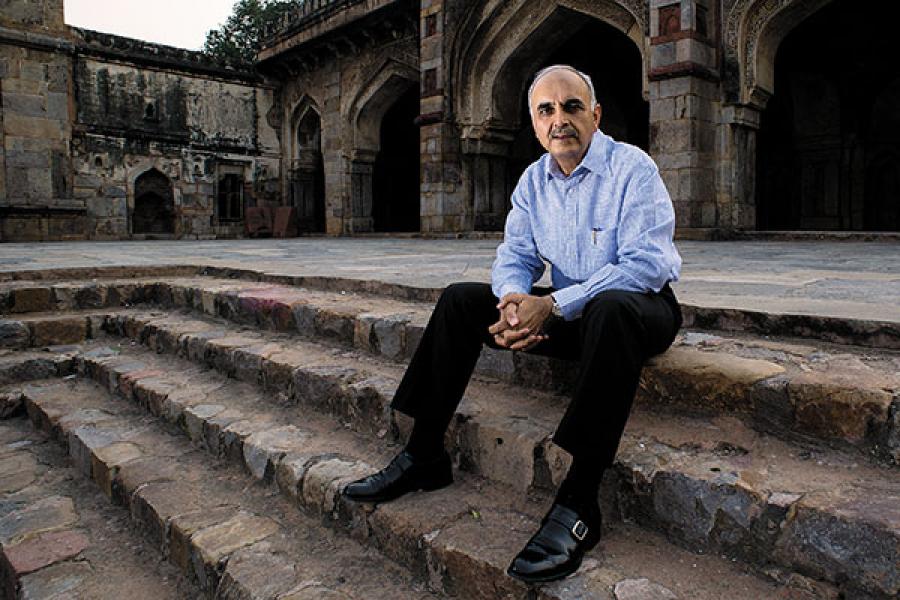 Award: Entrepreneur with Social Impact
Ranjan Sharma
Founder & director, IKSL
Age: 53
Interests outside of work: Reading. He has just finished The Billionaire’s Apprentice and And the Mountains Echoed. Also enjoys travelling and meeting people
Why he won this award: For creating a business model that bridges the information divide that exists in rural India and the agriculture sector


In 2007, Ranjan Sharma invested Rs 49 lakh—his entire Provident Fund savings—into an idea. That is as good a measure of his conviction as any. The plan: A SIM card that can improve the lot of the Indian farmer.

Having spent 27 years in the fertiliser industry (in Sriram Fertilizers & Chemicals and Oswal Chemicals and Fertilizers), Sharma had had a ringside view of the obstacles that kept the agricultural sector from achieving its potential. Key among them was the information gap in last-mile extension services. Further, after leaving the sector in 2005, Sharma had started Matrix Energy, a company that promoted the use of SIM cards in electric meters to monitor usage and help reduce distribution and transmission losses. There, he had learnt how SIM cards could be used effectively.

Standing at the intersection of both sectors, he saw the possibility of a robust business model built on SIM cards that would provide useful information in an easy-to-understand and, preferably, cost-effective manner. For instance, updates about the right time to sow, or ways to protect crops from pest attacks. These were intended to shield the farmer from climatic vagaries and keep him apprised about changes in the economic environment.

Sharma needed partners. He roped in domestic fertiliser giant IFFCO (Indian Farmers Fertiliser Co-operative) for its wide distribution network and credibility, and Bharti Airtel, as the sole service provider, for its technology. Since then, IFFCO Kisan Sanchar Limited (IKSL) has become a friendly, neighbourhood service, delivering free voice messages to farmers four to five times a day. Its subscriber base has grown to over 30 lakh, covering 19 states. In 2012-13, it delivered 86,000 voice messages and generated Rs 231 crore in revenue and a net profit of over Rs 7 crore.

“The real issue is the massive information gap facing the farmer,” says Sharma. “It is in the last mile where the government has failed them.” He mentions his experience during a pilot project in the Barabanki district of Uttar Pradesh. “The growth of sugarcane was stunted—they grew to just half the expected height of five or six feet. This led to lower realisation of money,” he says. “But there is a sugarcane research institute [Indian Institute of Sugarcane Research] in neighbouring Lucknow.”

Sharma took the farmers from Barabanki to the institute, which, despite its proximity to the sugarcane fields, wasn’t aware of the problem. They even had a solution handy but had no way to disseminate the information. Instead, they were waiting to be approached with problems.

That, in a nutshell, is how India loses out on agricultural productivity, says Sharma.

THE GAME CHANGER
IKSL’s is a win-win model for all stakeholders. While there is no commercial transaction between IKSL and the farmer (the information is free), there is significant reward for Bharti Airtel as the service creates stickiness for them—there is less motivation for a subscriber to move to a competing operator.

Frequently shifting loyalties is a serious problem for telecom service providers: An Indian customer sticks to an operator for an average of four months. Tariffs, therefore, are designed to recover the cost of customer acquisition during that period. In rural areas, the average revenue per user is roughly Rs 100 per month. If an operator retains a customer for four months, it makes Rs 400 while the acquisition cost is more than Rs 100. Consider, then, the worth of IKSL to Bharti Airtel if its content manages to help retain farmers and rural subscribers.

But the true value of IKSL’s efforts is in bridging the information divide in rural India. Sharma says that after the initial effort of trying to establish the model, “the focus, over the last 18 months, has squarely been on deepening and widening our reach”. In April 2012, IKSL functioned in 42 agro-climatic zones across India; today they are in 112. In UP alone, they have given paddy-related information across the state’s seven zones in June and July this year. 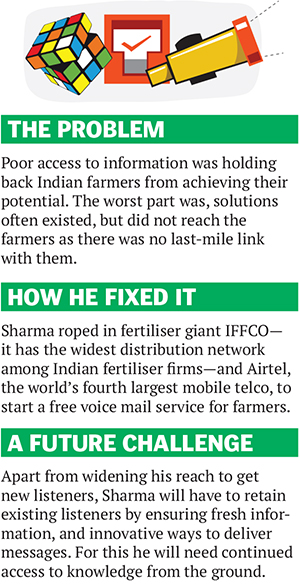 “We are also widening the scope of our messages by covering relevant areas beyond agriculture,” says Sharma. It now provides messages on employment and health as well as traditional home remedies, like how to ‘blacken’ your hair, which are among the best received messages. General information includes the likes of letting villagers know that women cannot be called to a police station after 6 pm. Sometimes the government too uses IKSL’s reach to spread weather advisories, like storm warnings in coastal areas.

In trying to expand and deepen its reach, IKSL generates roughly four messages per day for every zone. That works out to approximately 400 unique messages across the country every day.

Digging Deeper
While the first few years of success established the business, Sharma wanted IKSL to stay ahead of the curve. One of the steps in this direction was commissioning a study by thinktank Ipsos in April 2012. The study was to cover a sample of 2,800 farmers in UP, Maharashtra and Karnataka, and report on the “information needs of the farmers”. The Rs 37 lakh that IKSL spent on this study was money well spent as it helped tailor better messages.

Another critical move was winning the contract to run the Kisan Call Centres (KCC) in May 2012. KCCs are government owned, cover 28 states and provide information to farmers who call a toll free number. On an average, the 14 KCCs receive 8 lakh calls every month—80 percent of them are first timers. After IKSL won the contract, the highest number of calls has crossed 10 lakh a month. This has substantially improved IKSL’s understanding of the Indian farmer.

“This data is very valuable, since a keen understanding of it could suggest the demand patterns for fertilisers, pesticides, etc,” says Sharma. “It was a conscious decision to run KCC despite the fact that it does not make much money for us. But it lays the foundation for improving relevance in the messages.”

Other players like Reuters Market Light (RML), which rolled out around the same time as IKSL, have not been able to attain similar success in either reach or detail. This could partly be because RML is a paid service. Farmers are still unwilling to spend despite the benefits, says Sharma. Another factor is that RML is an SMS-based service which requires a minimum level of literacy, while IKSL is a voice message delivered in the local language and has a much wider acceptance.

The advantages are obvious, but Sharma, at 53, is still pushing the envelope. For instance, he wants to better the quality of the message. While earlier IKSL’s agronomists themselves recorded the message—sometimes even standing next to a highway with traffic noise in the background—professional voice artistes are now being recruited.

IKSL is also planning to place a correspondent in each tehsil who will be able to relay local news that can then be communicated to the villagers as voice messages. This will further drive the ‘deeper and wider’ theme of knowledge that Sharma has so successfully spearheaded.