How Sandeep Bakhshi has quietly but firmly turned around ICICI Bank

Bakhshi's mantras which are, simply, well accepted banking principles have been executed perfectly by ICICI's executives—and the CEO has succeeded in nearly erasing memories of a troubled legacy while making it poised to be a benchmark for other banks 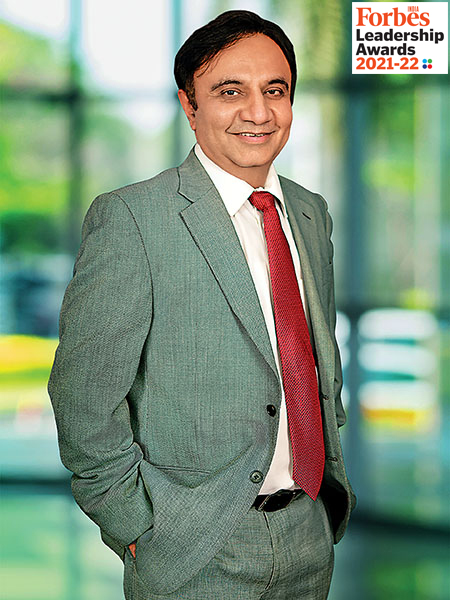 When the history of ICICI Bank—and its 67-year legacy, growing from a development financial institution—is spoken about, there will be a mention of how Sandeep Bakhshi led the bank from late 2018 onwards while keeping a low profile through a turbulent phase and turning in a highly effective performance.

ICICI Bank, India’s second largest private sector lender by assets, is being seen as the leader of the pack of India’s banks. It has, over the past three to four years, registered impressive profit and margin growth, as asset quality has improved and strengthened its liability franchise by growing deposits. Add a strong capital base and a nimble technological/digital platform, and you have a mix which, almost, cannot be beaten. “From the genesis of its journey to bridging the operating performance gap with sector leaders, the time seems ripe now for ICICI Bank to set the benchmark for others,” says Nitin Aggarwal, senior analyst at Motilal Oswal Securities.

The performance of the bank and its leadership has reflected in ICICI Bank being chosen unanimously as the best company in 2021-22, outrunning other large corporates, several of whom were assisted by economic tailwinds. India’s banks have been pulling through a continuing turbulent phase, where the more efficiently run banks are continuing to report better-than-expected earnings, with better loan growth and margins. But some mid-sized and public sector banks continue to face asset quality concerns.

Unlike most corporate turnarounds, there appears to be no magic sauce that Bakhshi has introduced. But there are some learnings from previous years that have been incorporated by the bank’s top management. These can be evaluated as Bakhshi’s mantras, which are, simply, well accepted banking principles. What ICICI Bank’s management has done is execute these perfectly.

But we have to go back a few years to understand what Bakhshi has managed to do. He might well be seen as the bank’s saviour on two occasions: First, when it was hurt post the global financial crisis in 2008, due to the exposure that its UK-based subsidiary had to the failed Lehman Brothers. Bakhshi was brought in 2009 as deputy managing director from group firm ICICI Lombard General Insurance, when the bank was facing higher delinquencies. He did the job and went on to lead ICICI-Prudential Life Insurance till 2018.

Once again, Bakhshi was called in first as the chief operating officer and then to lead the bank, after the bank had seen erosion of confidence. Bakhshi’s high profile predecessor Chanda Kochhar had exited the bank under a cloud of whistle blowers’ allegations, which included violation of the bank’s code of conduct and irregularities in sanctioning loans.

Bakhshi and the bank’s top management declined to participate in this article. He is rarely seen or heard at industry conferences. The message is simple: He wants his work to do the talking.

“Bakhshi’s entry was picture perfect. It was a difficult but also an opportune time. His presence has been calming for the board and top levels of management. He ensured that the gaps in execution of processes got fixed, whether it be towards credit lending or KRAs for branch heads,” says Nilanjan Karfa, executive director, banks and financials-equity research, India at Nomura.

“Bakhshi has successfully led a positive cultural transformation at ICICI Bank. As a leader, he has a very humble and low-profile approach,” says independent banking expert Hemindra Hazari, who publishes his writings on Singapore-based research platform Smartkarma. Shriram Subramanian, founder and managing director of InGovern Research, says: “Bakhshi has changed the work culture of the bank, and ensures that there is a greater level of scrutiny of borrowers. He prefers to be behind the limelight and has let the numbers speak for themselves.” 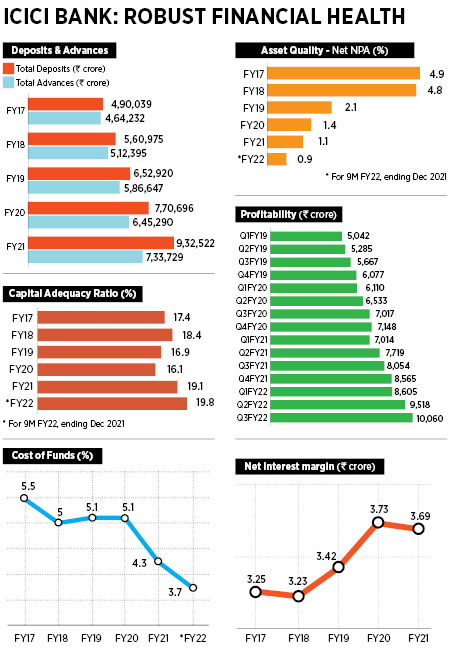 Narayanan Vaghul, an ICICI veteran who became chairman and managing director of the then ICICI (before it became a bank), and when Bakhshi had just joined, says:  “The direct correlation between staying away from the spotlight and success is not often appreciated.”

Investors have reposed faith in the bank’s management: The ICICI Bank stock has risen 123 percent to ₹698.3 on March 3, 2022 at the BSE, from a level of ₹313.35 when Bakhshi took charge. Not being promoter-led, foreign investors hold a 45 percent stake, domestic institutional investors about 44 percent (including LIC and SBI Mutual Fund) and public the balance 10 percent. 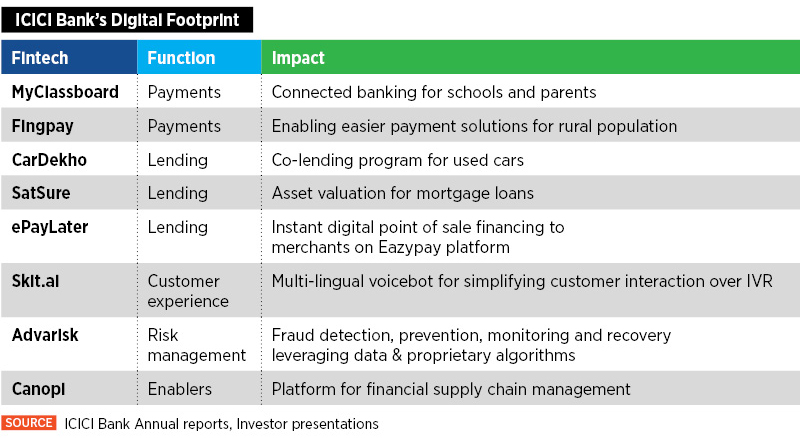 Not squabbling to be No 1

ICICI Bank has seen a sharp 77 percent jump in core operating profit to ₹10,600 crore on December 31, 2021, compared to ₹5,667 crore in the Q3FY19 quarter when Bakhshi took charge. Retail banking, where mortgage loans account for nearly 56 percent of the portfolio, has been the driver for growth. The bank’s retail portfolio has grown to ₹5,024 crore in the December-ended quarter from around ₹3,330 crore when he took charge. Retail constitutes 61.3 percent of the total loan book, followed by domestic corporate banking at 23.4 percent, business banking at 5.9 percent and SME at 4.4 percent.

The current leadership has often reiterated there has been no specific mandate to be an aggressive retail lender. The bank had already started to lower its exposure to large corporates and stay focussed on retail lending even during Kochhar’s tenure. But it also coincided with a rise in non-performing assets, which hit 5.2 percent in March FY16.

But Bakhshi and his team have managed to increase the provision coverage ratio on bad loans to 79.9 percent as of December 31, 2021, compared to 68.4 in Q3FY19 when Bakhshi took charge as CEO, and just 48 percent a year prior to that. The message is that lending could be towards retail, wholesale or small businesses, but the simple principle of ‘return of capital’ needs to be practiced: When you are giving a loan, you should have a reasonable assurance that the borrower has the intent and ability to repay.

Bakhshi highlighted some of the focus areas for the bank at an analyst meeting in January. “Looking ahead, we see many opportunities to grow our core operating profit in a risk-calibrated manner. Our ecosystem-based approach helps our customers to manage their business across the value chain efficiently, and has created new opportunities for us across businesses. We are investing in analytics capabilities and technology to enhance our offerings to customers and to build a robust future-ready architecture,” he said.

Bakhshi added that they “continue to be guided by the twin principles of ‘One Bank, One RoE’, emphasising the goal of maximising the share of target market across all products and services.

Another element that has worked for ICICI Bank is it did not want to be benchmarked against the other private sector giant HDFC Bank. “The corporate goal was not to overtake HDFC Bank; Bakhshi or his team never made those statements… it was only a media projection,” says Vaghul. He believes the bank will do well with a balance of retail and wholesale banking, as corporate lending remains in its genes.

Building employee morale was a challenge when Bakhshi took charge. Almost every action came under the scanner of regulatory authorities or the media. One of the early messages that ICICI employees heard was to forget the past six months or one year. They are after all a 28-year-old bank and a 67-year-old institution.

Bakhshi has built on one of his early mantras of ‘One Bank, One team’ to ensure improved coordination within teams. So if the bank does well, so do its employees.

Further, what has helped ICICI Bank is that, like Kotak Mahindra Bank, much of its core team—it  includes executive directors Vishakha Mulye, Sandeep Batra and Anup Bagchi—are all ICICI Group veterans. This means there is very little to unlearn or re-learn for the top management.

Compare this with the tenure of Axis Bank’s CEO Amitabh Chaudhry, who took charge in January 2019. Chaudhary has not only seen senior management, including executive director Pralay Mondal and group executive Naveen Tahilyani, quit in 2020, the bank has seen several thousand mid- and branch-level staff quitting during the pandemic, citing cultural change and unrealistic growth targets. But Axis Bank has overcompensated by aggressive hiring, and salary hikes and bonuses.

ICICI Bank’s stock has come off 15 percent from its January 13 high of ₹824, but analysts say a re-rating for the stock could happen if it continues on its strong growth path. ICICI Bank has got most of its act together over the past three years and Nomura’s Karfa expects retail banking businesses “to continue to show an impressive pace of growth in coming quarters. Home loan customers are usually sticky, a credit and cross selling model can be built around a customer.” So it would be much of the same for ICICI Bank. But he suggests that going forward, the bank will need to “continue to reinvent on a few fronts... due to evolving trends in the internet and ecommerce ecosystem. All lending institutions need to be constantly on their toes.” ICICI Bank knows that it will need to be resilient.

Now, with the impact of the pandemic continuing to ebb, credit growth trends will start to improve again in retail lending. Wholesale lending is unlikely to bounce back in a hurry until private capex cycles improve.

So retail and lending to small businesses will continue to be the focus for a few more quarters. However, some pockets of stress remain in commercial vehicles, micro-finance and SMEs, which could reflect in sub-par asset quality for some banks, says Anand Dama, head (BFSI) at Emkay Global, in a February 17 note. But there appears little for Bakhshi and his team to be concerned about. They continue to stay focussed on a diversified, risk-averse lending practice, which has worked well for them in recent years.

(This story appears in the 08 April, 2022 issue of Forbes India. To visit our Archives, click here.)