Each year, Katmai National Park in the US state of Alaska holds a contest to raise awareness about the protection of Alaska's brown bears. Everyone can vote online until October 11—a day also known as Fat Bear Tuesday—in honour of these massive creatures who call this region of the Great North home 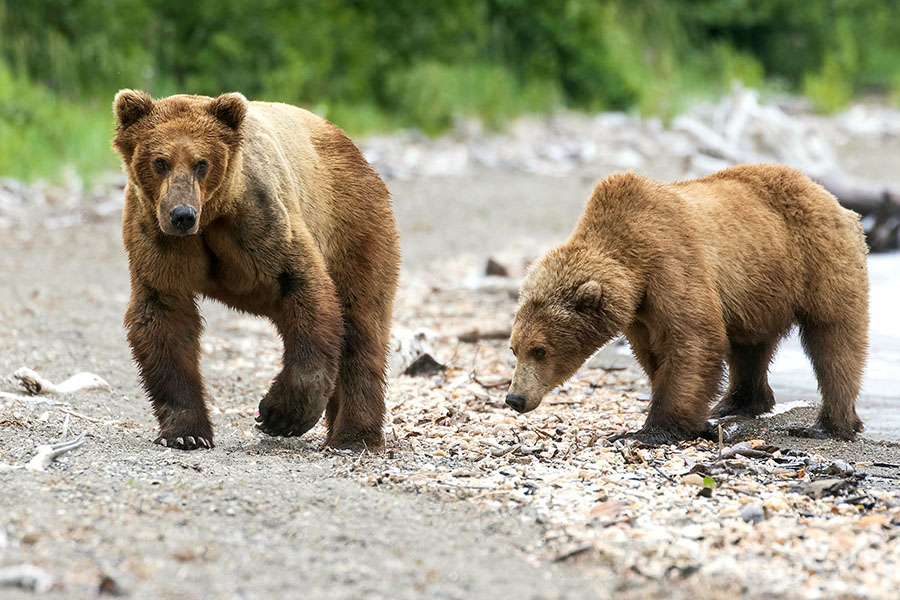 Brown bears feed mainly on salmon between June and October to gain enough weight before winter. This weight gain is essential for them to survive over the winter. Image: Shutterstock

As winter approaches, many of us are tempted to hole up at home like a bear in its den. But hibernation is about more than just getting snug and not going out: bears must prepare themselves by building up huge fat reserves. This process is the focus of Fat Bear Week, an autumn trend not just out in nature but also on the web.

Each year, Katmai National Park in the US state of Alaska holds a contest to raise awareness about the protection of Alaska's brown bears. Everyone can vote online until October 11, a day also known as Fat Bear Tuesday, in honor of these massive creatures who call this region of the Great North home.

Some of the bears are fan favorites, like Otis; this male with a drooping right ear is a four-time Fat Bear Week champion. He is also the current title holder. His secret? Patience. Otis is known to wait for the salmon to swim up the Brooks River to come to him, rather than actively chasing them like some of his younger counterparts do. This particular technique once allowed him to gobble up 42 salmon in one catch.

But he faces stiff competition in the 2022 edition of Fat Bear Week. Otis has to compete with younger—and more energetic—bears such as Walker, Grazer, Holly and Chunk. Chunk is a large bear with a distinctive scar on his muzzle. He has significant fat reserves, making him one of the largest and most dominant males on the river.

Getting ready for hibernation

Every year, tens of thousands of internet users participate in electing the individual bear who will hold the title of fattest brown bear in Katmai National Park. The contest attracted more than 600,000 animal lovers in 2021. This popularity is the pride and joy of Mike Fitz, a former Katmai National Park ranger who created Fat Bear Week in 2014. "I thought it would be a quirky thing Katmai could do every year, and it is, but I did not expect it to be this popular,” he told  the New York Times.

Internet users can learn more about the 12 competing brown bears on non-profit multimedia organization's Explore.org website. This includes watching them as they fish for salmon through cameras that rangers have set up near the Brooks River. “People learn more about brown bears and the salmon this way, and hopefully that translated to a greater sense of care for this remarkable place, as well as for bears and salmon around the world,” Mike Fitz told the American media outlet.

And indeed there is an urgent need for action: climate change is profoundly disrupting the flora and fauna in Alaska. Temperatures are rising twice as fast as on a global scale, like in other polar regions of the world. This phenomenon could jeopardize the survival of the many salmon that inhabit the region, and, by extension, that of the brown bears.

These animals feed mainly on salmon between June and October to gain enough weight before winter. Some males in Katmai Park can weigh up to 544 kilograms at this time, as much as 100kg more than they weighed during the summer. This weight gain is essential for them to survive over the winter.

For five to seven months, brown bears burrow and enter a state of torpor. They do not go into deep hibernation like the groundhog or the Arctic ground squirrel. However, their heart rate and oxygen consumption drop considerably during this hibernation phase. As a result, they break down their fat reserves to produce the energy they need to survive, while maintaining their muscle mass.

Fat Bear Week celebrates this amazing process that has fascinated scientists for decades. A clash of the titans, the outcome of which does not matter in the end, as long as the general public becomes aware of the need to preserve brown bears and their natural ecosystem.