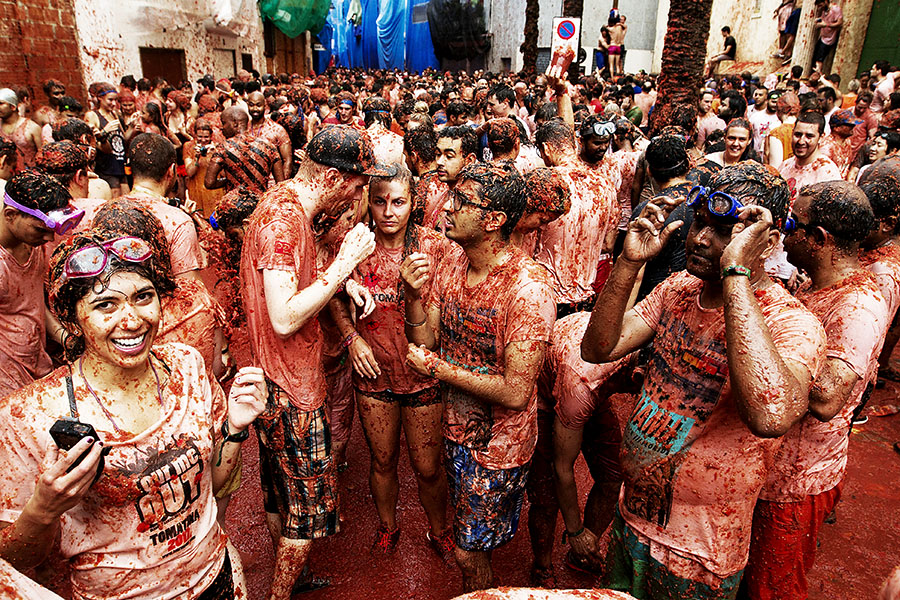 Summer is here, which means the silly season is in full swing in Europe. As daredevils from around the world try to outrun half-tonne bulls in the Spanish city of Pamplona we look at some of the other weird and wonderful festivals coming up.

On August 31, huge crowds of tourists and locals are expected to hurl tomatoes at each other during the annual "Tomatina" festival in Bunol, eastern Spain.

Usually involving some 160 tonnes of ripe tomatoes, it has been billed "the world's biggest food fight".

It has become a major draw for tourists from as far away as Japan and the United States.

Some 20 hopefuls from around the world will strut the stage in fancy dress strumming furiously on an imaginary guitar, in Oulu not far from the Arctic circle in Finland, from August 24-26.

Among this year's contestants will be Rob Palmer, who will represent Thailand with his pouting impression of former US president Donald Trump playing Green Day's "American Idiot".

According to the competition's ideology wars would end, climate change stop and all bad things disappear if everyone in the world played air guitar.

On August 28, 150 of the world's top bogsnorkellers will don masks, snorkels, flippers and sometimes fancy dress to swim two lengths of a 55-metre murky peat bog outside Llanwrtyd Wells in mid Wales as quickly as possible.

More than three decades after its inception the event attracts competitors from Sweden, Germany, the Czech Republic and Australia, according to Visitwales.com.

Lonely Planet has described it as one of the world's top 50 "must do" experiences. The time to beat is current champion Neil Rutter's record of 1 minute 18.23 seconds.

France's annual pig imitation festival gets under way in the Pyrenees village of Trie-sur-Baise on August 14.

The national champion is the person who delivers the best series of grunts, squeaks, squeals and oinks, illustrating the high points in a pig's existence.

Since the Middle Ages garlic and basil producers and aficionados have flocked to the central French city of Tours on St Anne's Day, July 26.

Some 250 traders will this year tout mounds of braided bulbs of white, pink and purple garlic and pots of assorted varieties of basil—from lemon to cinnamon, purple and Thai—in one of the gastronomic city's oldest neighbourhoods.

Tweets by @forbesindia
Simply Speaking: Success is a subjective phenomenon where the network matters beyond its measure
MFine merges with LifeCell's unit in JV; Vegrow raises $25 mln; Apple slips in PC shipments