"Rainbow-washing" remains a marketing technique used by brands to sell more products by improving their image and making them appear more inclusive, but it continues to give visibility to the LGBT+ movement 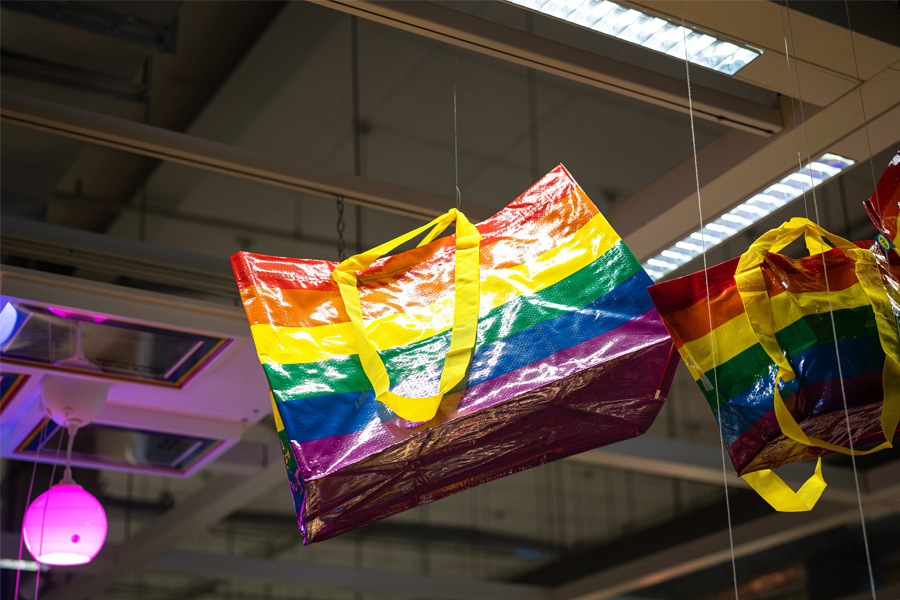 The legendary IKEA shopping bag has had a makeover in LGBT+ colors for Pride month. Image: Thank you for your assistant / Getty Images

This Pride month, many brands have released collections and products dedicated to the LGBTQ+ cause. While, for some, their status as partners and supporters of the community is recognized, for others, it could be more a question of cashing in. This notion has given rise to the term "rainbow-washing," referencing the rainbow flag that symbolizes the LGBT movement.

Another related term is "pink-washing," coined by Breast Cancer Action to denounce brand campaigns using breast cancer for their own profit, which then went on to encompass any political or marketing communication technique designed to change a brand's image in a progressive direction. The term was subsequently taken up for the LGBT cause and is now associated with it.

This year, some actions have sparked controversy, such as Elon Musk's tweet about Tesla's high-scoring record on corporate equality, when the billionaire had previously mocked the use of inclusive pronouns. Earlier in May, Elon Musk scoffed at the arrival of rainbow logos on Twitter, before boasting about his company's inclusiveness a few days later, which only served to inflame the internet.

Similarly, FIFA adopted a rainbow logo and posted a message on Twitter inviting the LGBTQIA+ community to find out "how FIFA is working to ensure the FIFA World Cup Qatar 2022 will be a celebration of unity and diversity," even though Qatar is one of the world's most repressive countries for gay people.

It is sometimes difficult to know if brands are true allies of the community, or if they are acting out of pure self-interest. Take the famous IKEA shopping bag or Nike's sneakers, for example. Sometimes shoppers don't know if brands are donating their profits to the cause or simply cashing in on the LGBT community. Plus, it's not enough to donate to the community once a year, especially when some brands continue to fund anti-LGBTQIA+ movements or political parties.

Beyond fashion, the food world is also getting into LGBT-themed products, such as Burger King's famous Whopper, which has been a recent subject of debate. In Austria, the Whopper has been dubbed the "Pride Whopper" for Pride month, changing its appearance to feature two identical buns to promote love and equality. A marketing move that was not necessarily appreciated by the community, judging Burger King as opportunistic.

And while some brands might only create tie-in products during Pride month, they remain valued and long-standing supporters of the cause in a broader sense. This is the case of Levi's, Puma and Burberry, which was an early adopter of standards of conduct to avoid LGBTI discrimination in the workplace. It is also the case of the designer Alexandre Mattiussi and his AMI label, which has unveiled a rainbow sweater in partnership with Tom Daley, all profits from which will be donated to the LGBT+ nonprofit, Kaleidoscope Trust.

"Rainbow-washing" remains a marketing technique used by brands to sell more products by improving their image and making them appear more inclusive, but it continues to give visibility to the LGBT+ movement. More than just rainbows, this helps reach a wider audience and aims to open people's minds and sometimes even to help young people discover the cause. So is this an asset for the community, giving it visibility, or a counterproductive marketing ploy that benefits brands that aren't really committed to the cause?

Tweets by @forbesindia
Virtual fashion is booming, but how's it doing on creativity and inclusivity?
Uniswap overtakes Ethereum on fees; DeFi outperforms