With online travel agency Expedia seeing an uptick in TV tourism, will the filming location of the Tim Burton series be the latest to benefit? 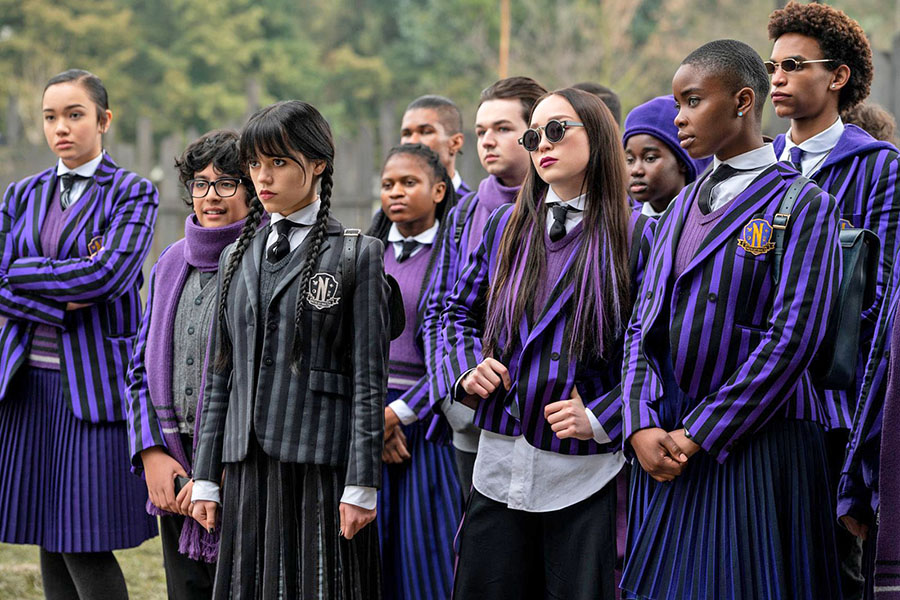 The series "Wednesday," starring Jenna Ortega in the lead role, was released on November 23, 2022 on Netflix. Image: Vlad Cioplea/Netflix

Out on Netflix for just a few weeks, new series "Wednesday," centered around the Addams Family daughter, has already turned viewers' lives upside down. With online travel agency Expedia, seeing an uptick in TV tourism, will the filming location of the Tim Burton series be the latest to benefit?

TV shows are having a genuine impact on our lives. From our wardrobes to our musical tastes, shows like "Stranger Things" and "Bridgerton" have been influencing our consumer choices. It's a phenomenon being seen once more with "Wednesday," the latest Netflix hit. The series about the daughter of the iconic Addams Family is giving some fans ideas for their next vacations.

The French site of travel agency Expedia revealed a 55%* increase in searches for hotels in Bucharest, Romania, where the series was shot in 2021. The increase was observed in the first two weeks before and after the launch of the series, compared to the four weeks prior to this period, the company explained.

While the capital of Romania enjoyed a surge in popularity thanks to the Netflix series, the Romanian countryside also got a bump in interest among those looking at vacation destinations, with a peak recorded at 15%** on the same site.

Meanwhile in the latest Expedia Group*** report on travel trends for 2023, "TV tourism" is expected to emerge as one of the top trends in the coming year. According to the results, streaming movies and series have become a key source of destination inspiration for travelers, surpassing the influence of social networks. Some 66% of travelers around the world have thought about traveling to a destination seen in a movie or TV show, while 39% of travelers have actually booked such a vacation, with the trend even more pronounced in the US where the figures are 68% and 61% respectively.

It's a similar situation in Canada, where 60% of travelers considered traveling to a site after seeing it featured in a series or a movie, but only 27% of Canadian respondents made such a reservation.

Also read: On offer: Here's how online travel portals are cashing in on the festive season

Before Romanian tourism got a boost from "Wednesday," the United Kingdom, New York, Los Angeles, Iceland and even New Zealand were among the streaming destinations made popular through series such as "Inventing Anna" on Netflix, "House of the Dragon" on HBO and "The Lord of the Rings: The Rings of Power" on Prime Video.

*** This study was conducted on behalf of Expedia brands (Expedia, Hotels.com, Vrbo & Wotif) by OnePoll, an international polling company. The survey was conducted online between September 22 and October 14, 2022 in the United States, South America, Europe and Asia. It was conducted among 24,000 people in 17 countries, including adults who have planned a domestic or international trip in the next 36 months.