Iceland's volcano show is a hit

The Lava Show, Iceland's latest tourist attraction, uses reheated lava from a real eruption of the island's Katla volcano more than 100 years ago 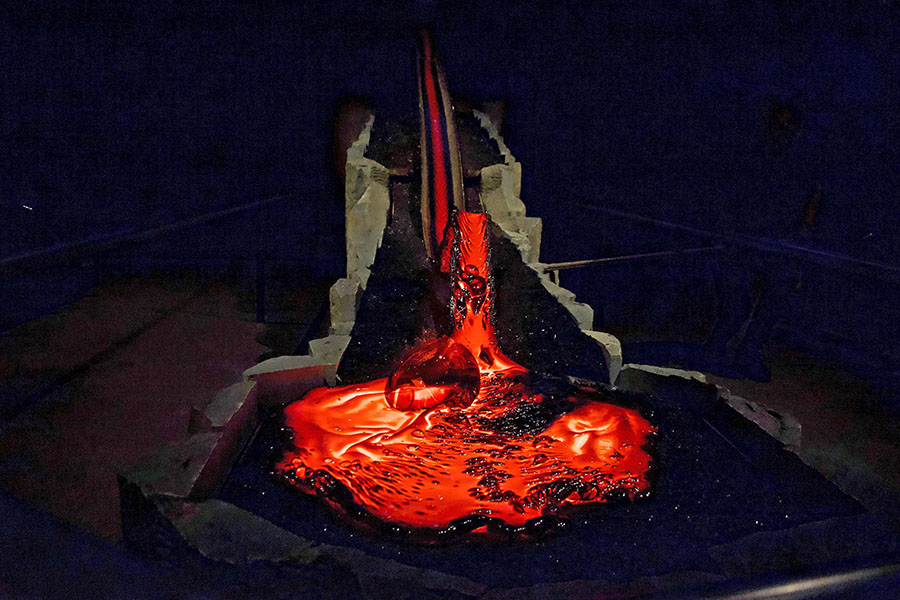 Hundreds of thousands of curious onlookers have flocked to watch the hypnotising jets of lava at Iceland's Mount Fagradalsfjall after two eruptions over the last year just 40 kilometres (25 miles) from Reykjavik. Image: Jeremie Richard / AFP

In a dark auditorium in Reykjavik, bubbling orange lava flows down a slide to within inches of awe-struck visitors.

The flow, contained on both sides by black sand, lights up the room like a sunrise.

This is the Lava Show, Iceland's latest tourist attraction, that uses reheated lava from a real eruption of the island's Katla volcano more than 100 years ago.

The heat emanating from the molten rock is tangible, so much so that some of the spectators shuffle in their seats to remove their coats.

"This is the show where you get to experience real molten lava flowing inside of a building, intentionally," the Lava Show's Scottish host Iain MacKinnon joked.

The molten liquid sizzled as it hit blocks of ice, crackling like the sound of breaking glass as it cooled.

"I can see why a lot of people would be drawn to (an eruption), but obviously you wouldn't be able to go near it in a normal natural setting," she added.

There is the same "wow effect" that people get at an eruption site, MacKinnon said.

Hundreds of thousands of curious onlookers have flocked to watch the hypnotising jets of lava at Iceland's Mount Fagradalsfjall after two eruptions over the last year just 40 kilometres (25 miles) from Reykjavik.

But not all Icelandic eruptions are safe.

While the lava used in the show retains a hint of sulphur, the dangerous toxic gases that normally emanate from an eruption have dissipated, since the rock has been reheated and melted down so many times.

More than 600 kilos (1,320 pounds) of tephra—the rocks ejected from Katla, one of Iceland's most dangerous volcanoes, when it last erupted in 1918—are used in the Lava Show.

"We heat that up to its melting point, which is around 1,100 degrees Celsius (2,000 Fahrenheit) and then we pour it into the room," said the show's founder Julius Jonsson.

In an adjoining room, a large furnace has been modified to suit the show's needs.

Jonsson's company has run a version of the production in the seafront village of Vik in south Iceland since 2018, but the Reykjavik show only opened last month.

He came up with the idea of a lava show when he was standing atop a glacier watching lava flow from Fimmvorduhals, a small eruption that preceded the massive Eyjafjallajokull one in 2010, whose ash cloud disrupted air traffic and stranded more than 10 million travellers.

Known as the land of fire and ice, Iceland has 33 volcanic systems currently considered active, the highest number in Europe. It has an eruption every five years on average.

"We thought it would be wonderful for Iceland if lava would always be flowing," Jonsson said.

Tweets by @forbesindia
India assumes G-20 presidency, will be responsible for shaping global crypto policies
Best of 2022 Ep1: Francisco D'Souza on the vision for IP-led tech services companies at RECOGNIZE