Who is Andres Valencia, the 10-year-old who's got the art market in a frenzy?

This 10-year-old American is represented by the influential Chase Contemporary gallery, and exhibited his work during the Art Miami art fair. His career will take another step forward on June 21, when one of his paintings goes under the hammer at Phillips in Hong Kong 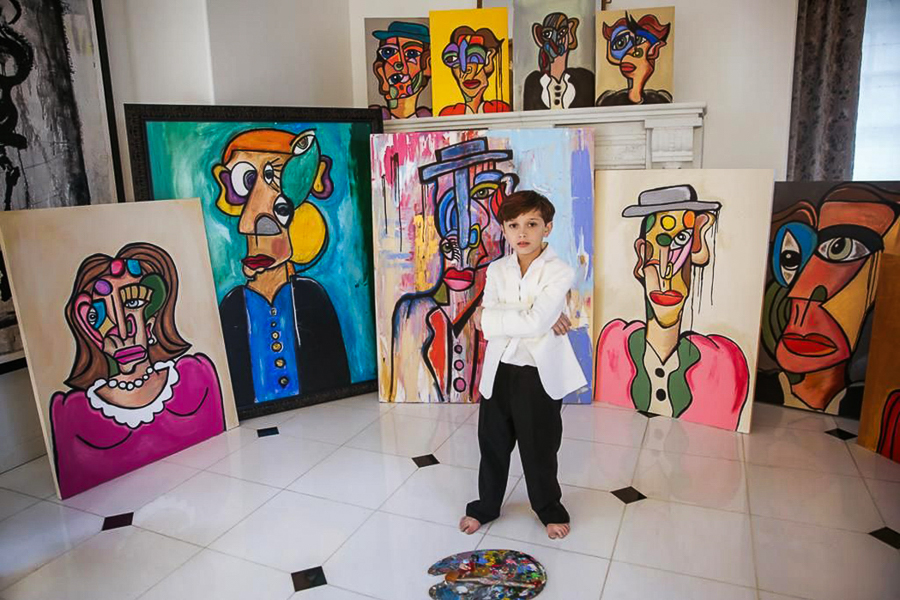 Andres Valencia cites Pablo Picasso, George Condo and Jean Michel Basquait among the artist who inspire him the most Image: Chase Contemporary

The art market has always loved young prodigies. And the latest in line appears to be Andres Valencia. This 10-year-old American is represented by the influential Chase Contemporary gallery, and exhibited his work during the Art Miami art fair. His career will take another step forward on June 21, when one of his paintings goes under the hammer at Phillips in Hong Kong.

A breath of fresh air will be blowing through Phillips' upcoming Hong Kong sale thanks to Andres Valencia, the (very) young American artist who has become the new darling of contemporary art in recent months. One of his paintings, "Ms. Cube," will be auctioned alongside creations by KAWS, Banksy, Anish Kapoor and George Condo. It is estimated to fetch between HK$200,000 and 400,000 (between US$25,900 and $51,000) -- as much as "Recurrence CTM818" by the late Korean artist, Kim Tschang-Yeul.

So how did his artwork come to be worth so much? "Ms. Cube" is one of Andres Valencia's most famous paintings. It was recently exhibited during the 2022 edition of the Palm Beach Modern + Contemporary Art Fair in Miami. This painting was also featured on the poster announcing the young figurative artist's participation in Art Miami the previous year. During this art event, Andres Valencia sold all of his exhibited paintings, including one to Jordan Belfort, the former trader who inspired Martin Scorsese's "The Wolf of Wall Street" movie.

But the American stockbroker is not alone in having acquired art by Andres Valencia in recent months. Actors Sofia Vergara, Channing Tatum and Brooke Shields all have works by the prepubescent painter in their collections. The hype is such that the Chase Contemporary gallery has decided to represent this 10-year-old American boy, which some media are even hailing as the next Picasso. The Spanish master is, in fact, one of Andres Valencia's inspirations, as are George Condo and Jean-Michel Basquiat. Indeed, the young boy began painting at the age of six, after watching a documentary on the enfant terrible of contemporary art. He has since perfected his figurative style, halfway between surrealism and cubism, as well as his working method.

Like many artists, Andres Valencia has his own particular routine. "I paint in little pieces. I work on it for an hour or two. Then I go do something else. I come back to it the next day and keep adding more .... You can express your feelings and stuff on canvas," he told the Miami Herald. He creates his colorful works standing on a stepladder in his family's home in San Diego, California, in silence or with music playing in the background. His favorite artists include Jimi Hendrix, Queen, Michael Jackson and The Beatles.

While we'll have to wait until June 21 to find out what price "Ms. Cube" will fetch, Andres Valencia's career shows no signs of slowing. His first solo exhibition will open in New York on June 23. The name of the show is "No Rules." In it, art lovers will be able to discover about 30 paintings created by the artist during the last two years—when he's not at school, like other kids his age, or playing outside with his friends. Still, Andres Valencia stands apart from his peers. The 10-year-old makes no secret of his desire to become a world-famous celebrity. And he's clearly well on his way to achieving that goal.