Bhutan's journey back in time 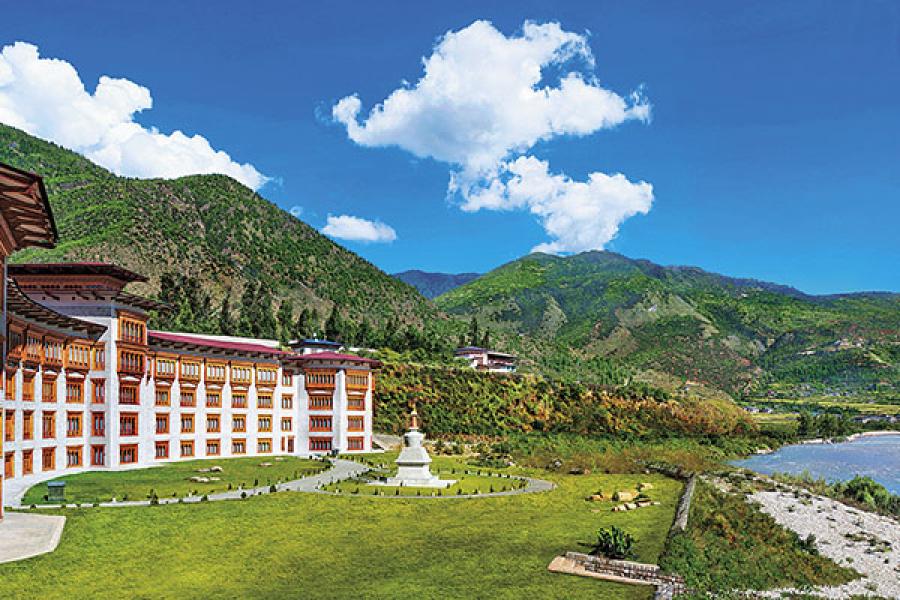 The Le Méridien Paro, Riverfront, offers a stunning view of the Paro river and is surrounded by the eastern Himalayas

As the sun sets on Bhutan, the land of thunder dragon doesn’t allow the night to creep up on it silently. At Le Méridien Paro, Riverfront, a five-star luxury resort nestled on the Eastern Himalayas, the transition is captured gloriously at Latitude 27°23’, its stylish coffee shop by day and cocktail lounge by night. Latitude invokes ancient Bhutanese tradition as rows of lamps are lit and the metallic vibrations of singing bowls—ancient Tibetan meditation tools that produce sounds through vibration—seamlessly ease the day into dusk.

The rituals will calm your jangled nerves, so will the panoramic views from the hotel, the second from the Starwood Hotels & Resorts stable in the country. Located on the edge of the Paro river, Le Méridien overlooks larch trees that line the river’s bank and change colour with every passing season. 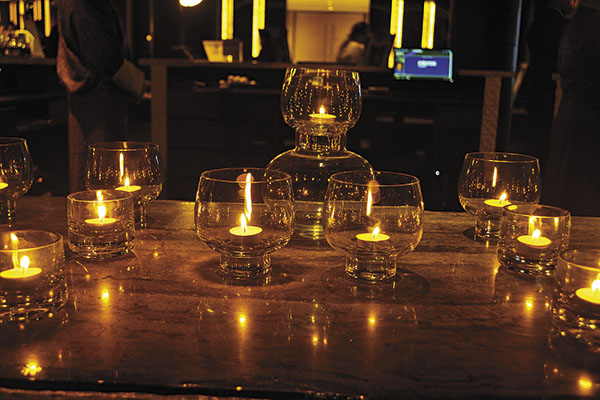 The transition from day to night is marked by a ceremony in which lamps are lit at the hotel’s cocktail lounge, Latitude 27°23’

The interiors of the hotel are modern, yet incorporate elements of traditional Bhutanese arts and culture. The building is constructed to highlight Zorig Chusum, 13 ancient arts and crafts of the country. Much of these are showcased in the arrival area. The building itself is made up of stone while wooden carvings are prominently featured throughout.

Its international style is reflected through the adoption of the mid-century modern, a design movement of mid-20th century that depicts simplicity through linear forms. 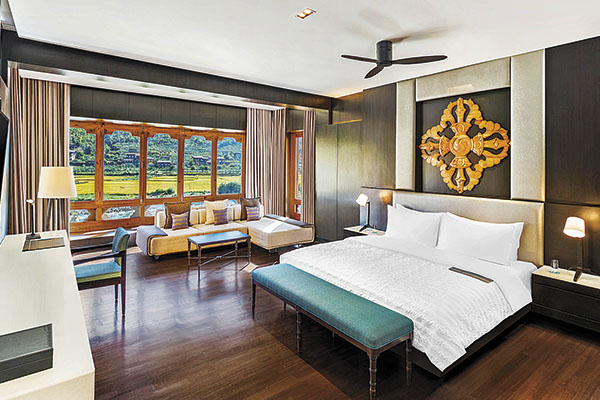 “Through the entire portfolio, you’ll see a juxtaposition of the old and the new, be it the physical structure of the building, the design of the interiors, the furniture. So, while the shapes of the chairs and sofas are consistent in Le Méridiens around the world, they will be juxtaposed with the local,” says Brian Povinelli, global brand leader of Le Méridien and Westin Hotels & Resorts (also a part of Starwood Hotels). 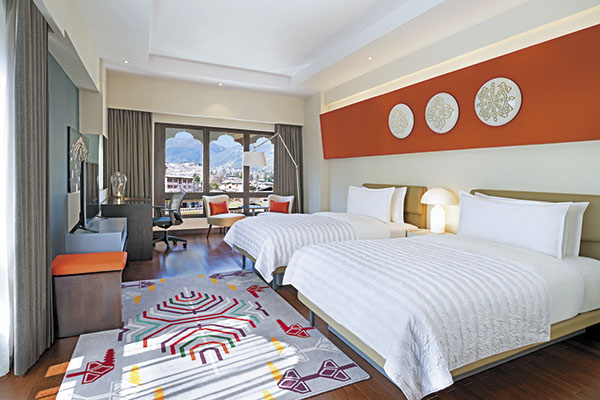 Some of the suites offer a view of the imposing chorten (stupa) erected in the lawns. The ‘chortens’ in Bhutan are buildings with great symbolic significance often constructed either in memory of a deceased or as a spiritual and religious expression (see box). 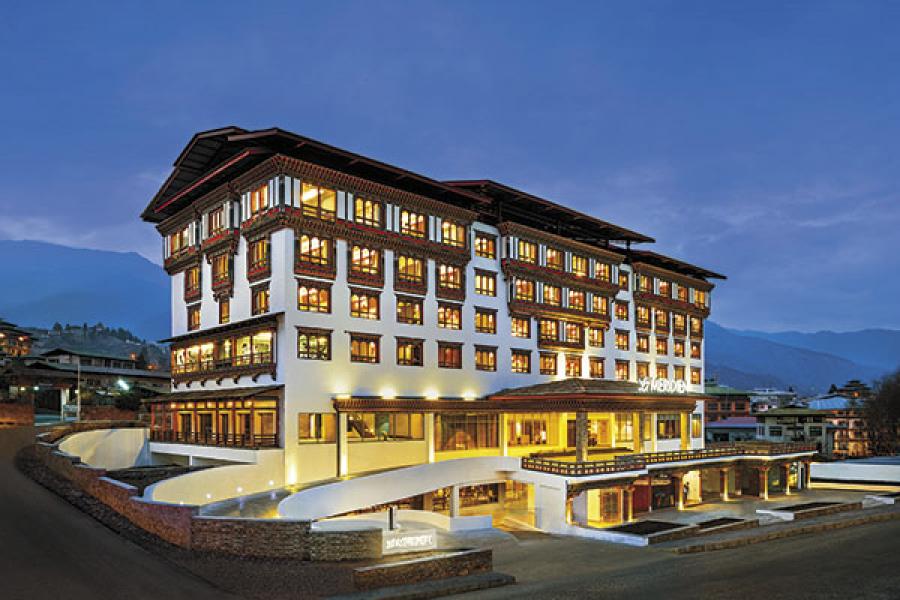 A 30-minute drive from the breathtaking sights of Paro is Le Méridien Thimphu, the hospitality group’s largest hotel in the country. A striking visual element, as one drives up to the porch of the hotel, is the ceiling. Painted with ‘Om Mani Padme Hum’, the sacred mantra introduced by Buddha Shakyamuni thousands of years ago.

It is the most widely-used Buddhist mantra and is said to invoke the blessings of Chenrezig, the Buddhist avatar of compassion. The red flags lining the ceiling at the lobby symbolise the local belief that the winds of good fortune, health and prosperity will bless you on your journey as you set off to explore the Himalayan Utopia. 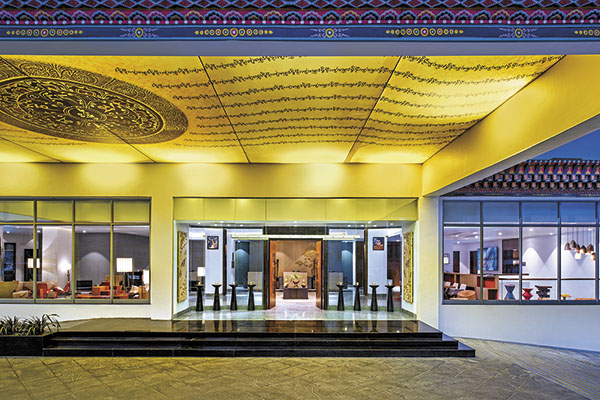 The proximity of old and new, and global and local, is evident in the Thimphu hotel’s décor too. As you enter the lounge, you cannot miss the cube seats upholstered in traditional Bhutanese textiles. In the rooms, the striking madder red stripe on the wall is typical of those seen along the walls of temples and dzongs (fortresses). The white medallions on the stripe are part of the eight lucky symbols of Bhutan. 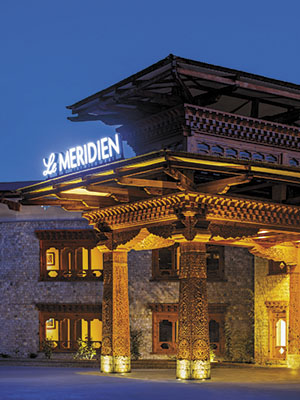 (left) The intricate wooden carving at the entrance stands out

As part of their Éclair programme the Le Meridien chefs have infused local flavours into one of their breakfast items. Some of their handiworks at the Thimphu hotel include the rose marmalade, betel leaf and cream cheese éclairs, and sinfully healthy éclairs made with chocolate and goji berry (boxthorn fruit) that control diabetes and blood pressure. At Paro, too, they have played with chocolate, combining it with ema datshi (the national dish of Bhutan made with chilli peppers and cheese).

Evidently, like everything else in Bhutan, Le Méridien, too, is an interplay of tradition and modernity.

(The writer was in Bhutan at the invitation of Le Méridien)