How Berlin remembers its troubled past

On almost every corner and street, monuments, big and small, serve as reminders of the city's troubled past 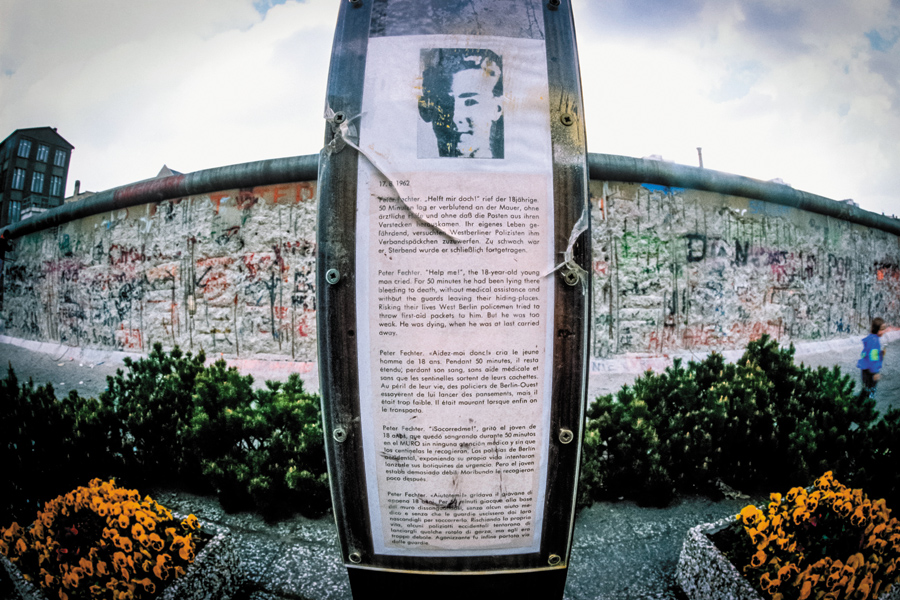 A plaque in memory of Peter Fechter erected in Markgrafenstraße
Image: Getty Images

Not far from Berlin’s most visited Cold War memorial Checkpoint Charlie, on the lawns of an apartment complex, I spot a strip of concrete wall covered with graffiti. Nearly 27 years after it was brought down on November 9, 1989, paving the way for the reunification of Germany, in many ways, the Wall is still omnipresent in Berlin. A large part of it still stands as the East Side Gallery, very close to the hip Friedrichshain neighbourhood in the erstwhile East Berlin, managing to withstand threats from real estate developers, till as recently as March 2013. And strips of it continue to stand all across Berlin, a silent yet voluble reminder of a once-divided country and city.

But it was a smaller monument that I discovered on that unusually sunny May afternoon that took me by surprise and made me realise that Berlin is full of such memorials of its turbulent past. Keen to show me a piece of his city’s history, Karsten Klosse, my lunch partner for the day and a newsroom manager at the German Press agency Deutsche Presse-Agentur (DPA), where I was interning for a month, asked me if I knew where the Wall once originally ran along. 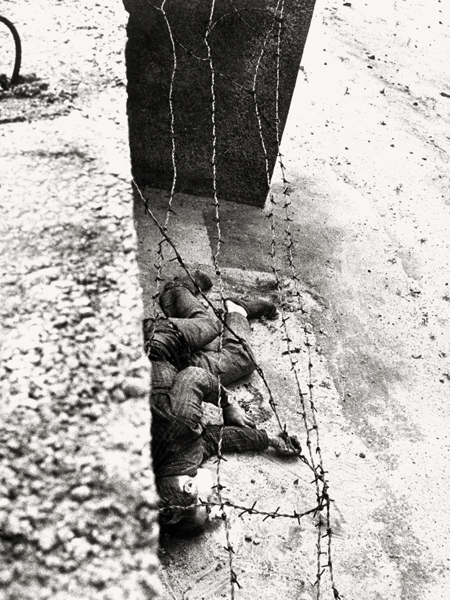 Peter Fechter, 18 was killed while attempting to flee to West Berlin by climbing over the Wall in August 1962
Image: Bettmann via Getty Images

Very close to where we stood, it turned out. I followed him across the street from the DPA office on Markgrafenstraße, through a noisy shopping mall, to arrive at a seemingly inconspicuous spot on Zimmerstraße. There, a fibreglass plaque announced that 18-year-old Peter Fechter had attempted to flee to West Berlin by climbing over the Wall on August 17, 1962. He was shot by the border guards and lay there dying, wounded and bleeding without help. One of the first to try and flee East Germany (136 people died trying to cross the Wall over to West Berlin), young Fechter became the face of the fleers.

With its hipster bars, cafes selling vegan currywurst, and cyclists propagating environmental consciousness, easygoing Berlin is Europe’s poster child for all things cool. But scratch the city’s ebullient veneer and its tumultuous past rushes to the surface, unhesitant.

For Berliners, the countless monuments and memorials strewn across the city form a backdrop to their everyday life. Prominent among them are the Memorial to the Murdered Jews of Europe (also known as the Holocaust Memorial), the Book Burning Memorial, and the country’s 140-year-old Reichstag or Parliament building itself, witness to difficult history under multiple powers before being restored to its present-day avatar. In his book, Germany: Memories of a Nation, author Neil MacGregor notes that the monuments in Germany offer a moral message of sorts; “the past offers lessons which must be used to shape the future”. He further observes that these monuments are “an exercise in painful self-recollection”.

Though when it was inaugurated in 2005, the Holocaust Memorial evoked sharp responses from writers like Günter Grass, who called for it to be abandoned for it represented the darkest period in human history.

For Germans, it is about learning from the past. From outside, the memorial, which pays tribute to the ruthless persecution of Jewish people during the National Socialist regime, appears like an installation of grey concrete stone pillars. But these unmistakably look like tombstones laid out in neat rows. Step inside the undulating monument and you see people walking in front of you vanish, their bodies dwarfed and swallowed within the labyrinth of its pillars, just as the Jews disappeared. 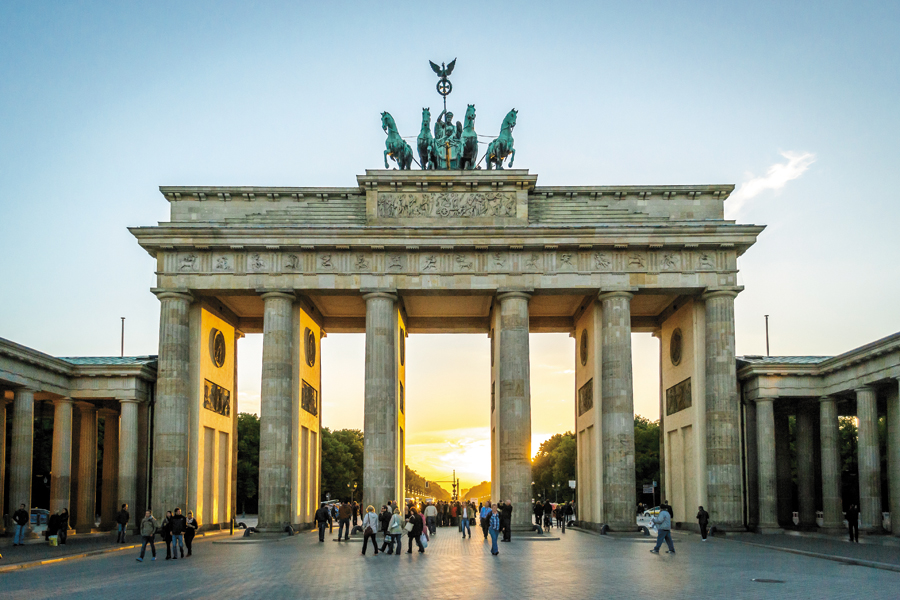 A few minutes’ walk away from the Holocaust Memorial stands the German Parliament building, the Reichstag, that first housed the united German Empire in 1871. The chaos of many wars and ample destructions to its structure later, in its restored version, there is still tangible history on the Reichstag’s walls  —the Cyrillic scribbles of the Russian soldiers who occupied it after toppling the Nazi regime in 1945—while the glass cupola or dome signifies transparency and the vigour of the German democratic process.

In contrast with the Reichstag, the Book Burning Memorial in Bebelplatz is simply a glass panel nailed into the cobblestoned boulevard. Look down and you will see empty white bookshelves, enough to house about 20,000 books, in memory of the around 20,000 burnt by the nationalist German Student Association on May 10, 1933. 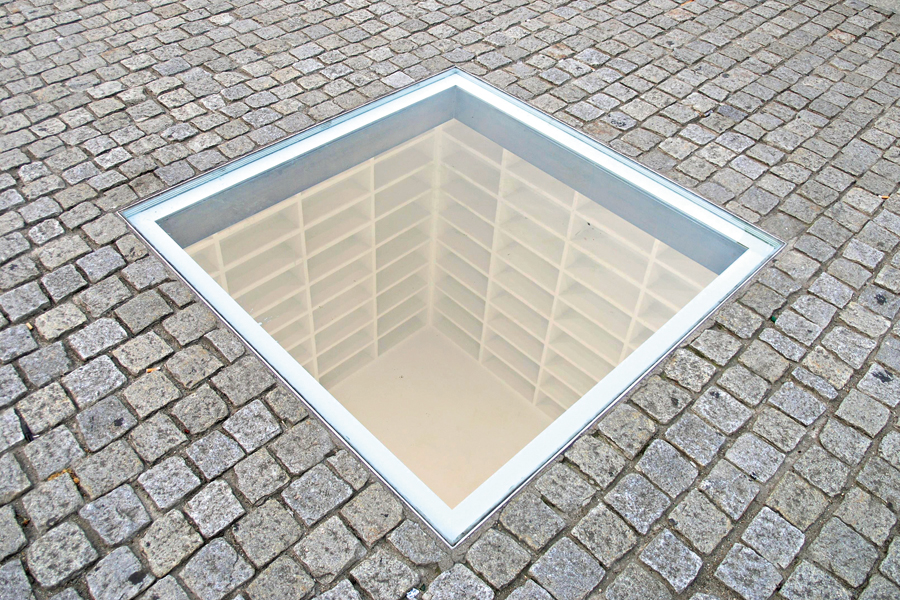 The Book Burning Memorial has empty bookshelves that can house about 20,000 books
Image: Wikimedia

“Every person who has been to Berlin even for a short duration will notice that there is history on every corner of its streets,” Sascha Mengerink, publisher of guidebooks called Carl Goes Berlin, tells me. In Berlin’s residential neighbourhoods, I often spotted sculptures of Jewish families with their suitcases, ready to be transported to one camp or another. The Anhalter Bahnhof train station, close to the city centre, from where I took the metro every day to my rental apartment in the suburbs, served as a transportation hub for Jewish victims, distributing them to camps located around Berlin. Though it was bombed out in the war, portions of its entrance still stand to this day, serving as a stark reminder.

Even the traffic lights, as Mengerink points out, are a reminder of what once was. “The Ampelmann pedestrian traffic light symbols are a cap wielding relic from the Soviet times. Such little details are everywhere if you care to pay attention.” After the fall of the Berlin Wall, there was a move to dismantle everything to do with the GDR, but East Germans decided they would not let their history be destroyed so completely. Today, many traffic lights even across the west of Berlin have the Ampelmann. 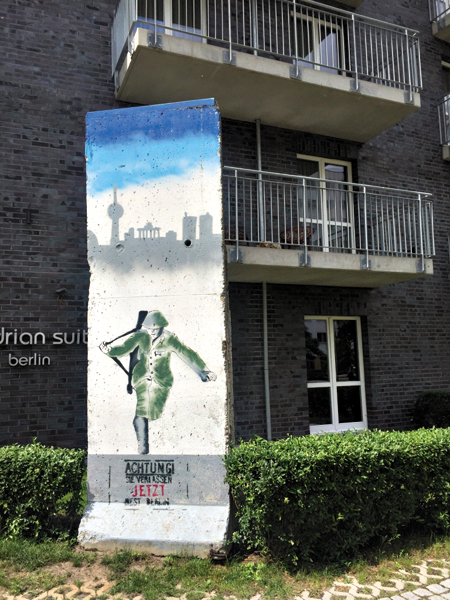 Nearly 27 years after it was brought down, the Wall is still omnipresent in Germany
Image: Prathap Nair

Berlin has some Soviet era monuments as well. At the southern edge of Berlin’s Kreuzberg district is the Treptower Park and walking into it feels not unlike sauntering into a Soviet town with distinctive Soviet-style monuments. There’s an eerie sense of grey opulence. Weeping willows line its entrance, their heads droopy as if eternally mourning. There is a humongous statue of a soldier wielding an equally enormous sword, lording over the park peppered with curious tourists and locals who use the park for jogging. Under his sword is the crushed swastika. There’s a shivering child clinging to his shoulder. The message is loud and clear—the Soviet Union wanted the rest of the world to know that it saved Germany from the Nazis. The memorial also serves as yet another stark reminder of crushing Communist ideals, under which Germany stood divided for decades. It was not demolished even after the Soviet forces left Berlin. As MacGregor says in his book quoting the German historian Michael Stürmer, “In Germany, for a long time, the purpose of history was to ensure it could never happen again.” 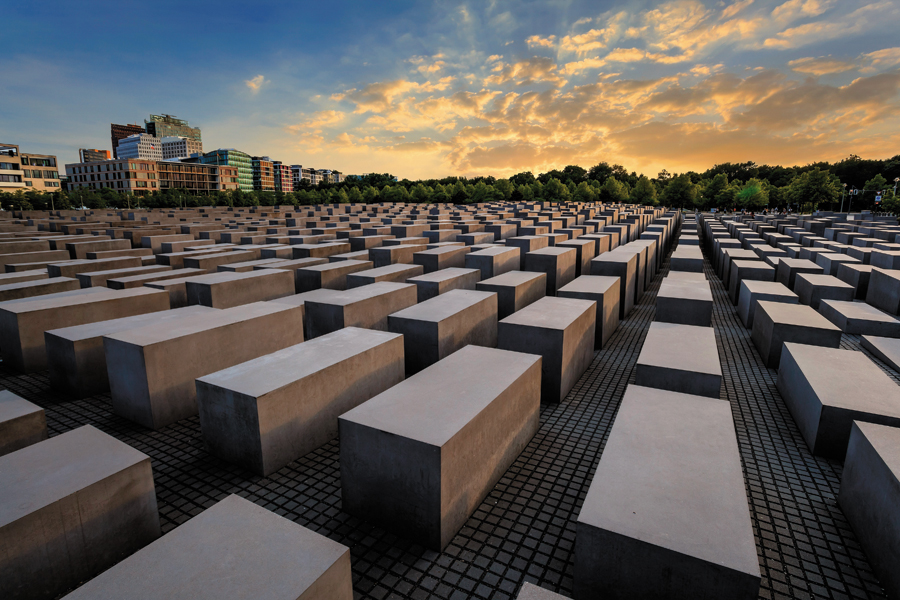 The Holocaust Memorial was inaugurated in 2005
Image: Shutterstock.com

Despite exercising measures for “painful self-recollection”, there had still been many monuments kept away from the public eye in Berlin, courtesy a different kind of awkwardness and mortification, perhaps, associated with them. Until recently. Earlier this year, the city opened its hidden storage to reveal its chequered history by way of an exhibition called ‘Unveiled—Berlin and its monuments’ at the Spandau Citadel, on the outskirts of Berlin. One of the monuments in the collection is a 3.5 tonne Lenin head from a statue that was broken into pieces and buried in a forest around Berlin after the Soviet regime ended. Other statues and monuments on display include those from the period of the Kingdom of Prussia and the Weimar Republic to Nazi Germany, and the division and reunification of Germany.

Perhaps no monument evokes memories of the past as much as the iconic Brandenburg Gate. Built as a peace monument by the Prussian King Frederick William II in the 1780s, it had long been the location for victorious celebrations and nimble protests. It bore witness to Napoleon’s expulsion from Berlin in 1813 by the Prussian troops, Germany’s rise as a powerful force in Europe in 1870 and stood neglected in the Soviet side of divided Berlin after Allied forces dissected the city. Much like any other monument, the Brandenburger Tor also bears marks of the many wars it has endured—you only have to look closely to spot gunshot marks on its pillars. 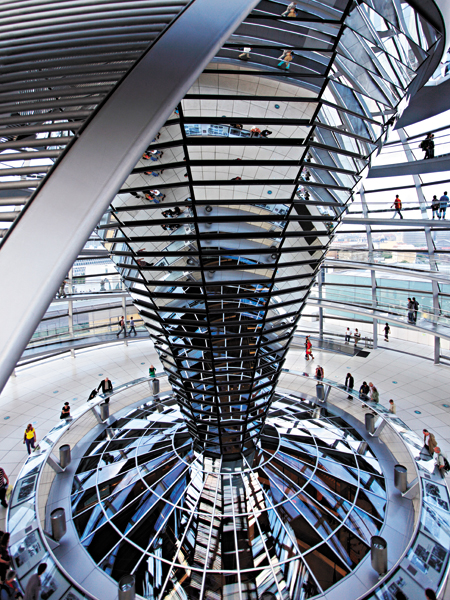 Mengerink, whose grandparents and mother are from Eastern Germany and who were among the lucky few who fled to the West and later to The Netherlands after the Wall was erected, recounts a moment when the monument literally stopped him in his tracks. “I was running the Berlin Marathon last year and when I finished under the Brandenburger Tor, it gave me goosebumps. My wife teared up too,” he says. Something about the moment was liberating for him because he felt lucky enough to be free from the shackles of war that had stifled his family and tore it away from the city they loved.