How to steal the (fashion) show

The art of creating cinematic experiences on the runway 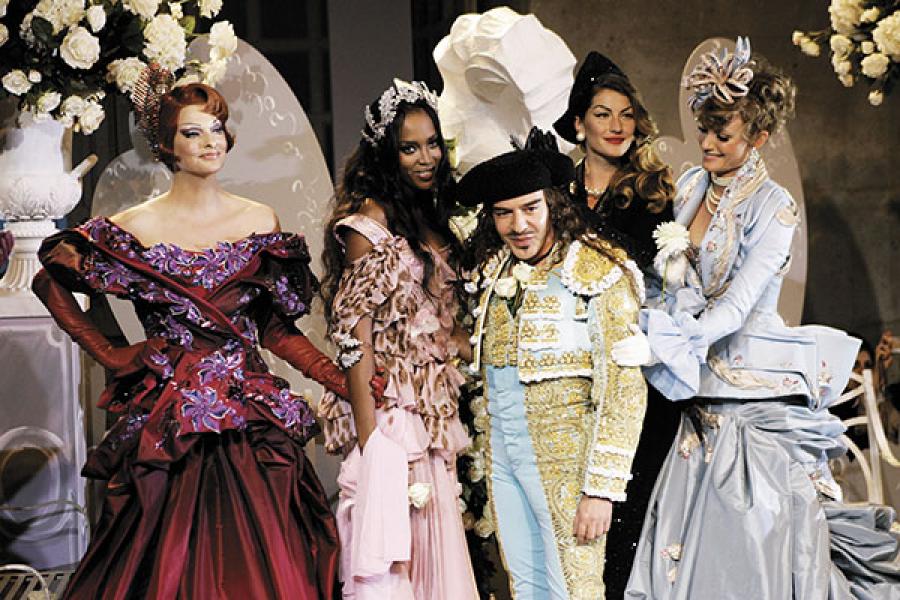 That moment, when lights flood the ramp and the first model steps out, the music soars and all eyes are on the drama about to unfold. The anticipation of a story well told: It is an addiction for those of us in the business of fashion. One that is driven by a peculiar calendar that confounds math with a five-day week—and it happens twice a year at least, and in the four best cities of the world: New York, Paris, Milan, London.

The glamour goes in tandem with the bottomline. A trend presentation starts as the ultimate showcase of a designer’s creativity but ends as a retail look book; a guide for buyers to determine how much you will be spending next season—by deciding what you will be wearing. And before you interject… no, you never wear a look off the ramp on the street. The only time it is okay is at the show, at the behest of the designer. Otherwise, your instincts are right when you laugh at the idea of stepping out in that.

Now I have a reverential view of fashion. A show, to me, compares to a cinematic experience. And there are those who recognise it—and celebrate it—better than most.

In India, no one gets it better than Sabyasachi Mukherjee. I remember his debut in 2002. The fraternity realised at the outset that a star had been born. Since then, his every showing has had a wow factor. But this year he topped it by displaying so much diversity that you felt, perhaps, there were two entirely different people designing under one label. In March, he took over the iconic Richardson & Cruddas Mills in Mumbai to create a 60-metre long ramp to send over 62 models in 105 outfits. Titled ‘Big Love’, he used drones and disco music to showcase his version of power dressing in the ’70s.

In July, it was the turn of couture to take centrestage. A set designed to resemble an abandoned mansion was the backdrop to the sexiest clothes the designer has ever sent down the ramp. The sensuality was tightly controlled. And elegantly enhanced by red soles. He had pulled off a coup and collaborated with Christian Louboutin. It was so much Sabya’s show that headlines didn’t give the Parisian shoe designer equal billing. Instead they referred to him as Sabya’s showstopper.

There were many beautiful shows at the Amazon India Couture Week, but it is likely that people will only remember this one. That is what Sabya is a past master at. He understands the importance of occupying a permanent place in memory. Of creating a powerful visual image that resides within. Detractors call him clever and manipulative. I think these are compliments. Artistes must be remembered.

Elevating shows to an art form is something the older European fashion houses do instinctively.  The shows in Paris and Milan are so incredible, so reflective, of a brand’s DNA, that you almost always miss the effort behind it. One of my defining moments as an editor was the House of Dior’s haute couture Autumn/Winter 2007-2008 presentation. Held at the Palace of Versailles, the setting was apt for grand theatre—and theatrics. The brand was celebrating its 60th anniversary and a decade of Galliano at its helm—I still remember thinking I will never see anything this perfect, ever again. Or this extravagant. 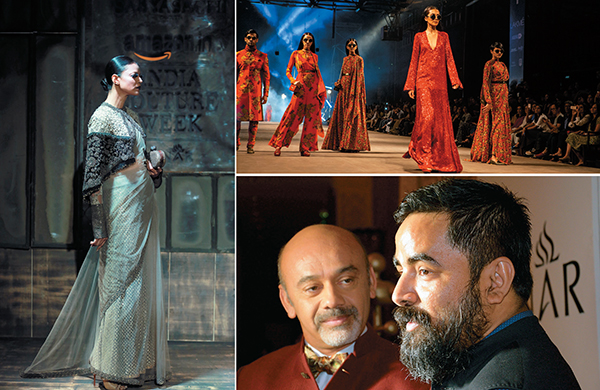 Image: Getty images; Lakme India Fashion Week; Corbis
(Clockwise from far left): Sabyasachi Mukherjee’s collection at the Amazon India Fashion Week; his collection at Lakme India Fashion Week; the designer with Parisian shoe designer Christian Louboutin
I suspect even insiders were not prepared for what unfolded. The 30-minute-long show was presented on a set inspired by a 1930s ball at the Chelsea Arts Club. The ramp was 500 feet long, running through the gallery of The Orangerie at the Palace. Forty-two of the world’s top models, including Linda Evangelista, Naomi Campbell, Shalom Harlow, Helena Christensen, Amber Valletta, Karen Mulder, Stella Tennant and Lily Cole walked for the designer. The clothes looked like marvels of engineering—so voluminous and elaborate was their construction—as they traced the evolution of the house from Christian Dior’s 1947 ‘New Look’ to the Gibraltar-born designer’s flair for exaggeration. Add to that a string quartet, choir singers, flamenco singers and dancers, and a modern track by English DJ Jeremy Healy.

So memorable was the showing that Hilary Alexander, then The Telegraph’s fashion director, wrote the next day, “The Brazilian model, Gisele Bundchen, opened the show in a classic, 1940’s-look suit, based upon the work of the photographer, Irving Penn, who photographed many of M Dior’s early collections. She was followed by girl upon girl, looking as if they had stepped from the walls of the Louvre or the National Gallery, representing Toulouse-Lautrec, Aubrey Beardsley, Rubens, Degas, Manet, Sir Joshu Reynolds, Fragonard, Watteau and a host of others, each one in a creation more exquisite than the last.” Every detail paid tribute to Christian Dior’s love for art. Even the heels worn were so vertiginous, so sculpted, that models were accompanied by men in black to ensure they didn’t fall as they walked the distance. The true artist was Galliano as he took a bow, dressed as a matador.

That evening, the brand hosted a huge ball in The Orangerie gardens. Illuminated by candles, the air was fragrant with the smell of paella being cooked in giant pans as celebrities like Kate Hudson, Charlize Theron, Penelope Cruz, Sofia Coppola, Tilda Swinton and Jessica Alba mingled with guests. In the wee hours of the morning, Galliano was holding court at a private party. He had changed into gypsy clothes and was matching the flamenco dancers, step for step. There was no sign of the controversy that threatened to derail his career. The designer was lost in his craft, and in that moment. Much like his audience.

Tweets by @forbes_india
Jalabala Vaidya and Gopal Sharman: A president, a Beetle and a play
The perils of true-crime writing