Shobhana Bhartia inherited a newspaper that was intended to provide the agenda in a pre-independence India. But the demands of the new age are vastly different and the head of HT Media has more than kept up with the times 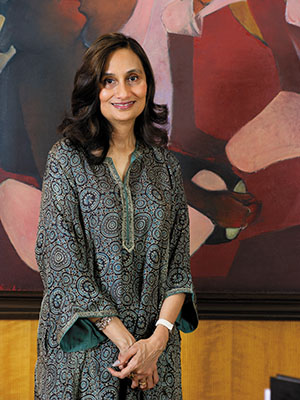 There was a time when profit was an uncomfortable word at HT Media. Shobhana Bhartia, the current chairperson and editorial director, recounts how, early in her career, she would often indulge in a small celebration to mark profits. But her father KK Birla would be perplexed at her enthusiasm. After all, his media venture wasn’t supposed to be a profit-making concern. He didn’t even think of it as a business. For him, it represented an agenda for independence at the time Hindustan Times (HT) started in 1924, and later, a mission for nation-building post independence.

Ninety years down the line, HT Media is a successful and profitable business, and the publisher of India’s second most read dailies both in Hindi and English (Hindustan and HT), as well as English business paper Mint. It has also ventured into radio, the internet business and education. And profit is no longer an uncomfortable word.

Bhartia, who grew up in Kolkata, learned about business, politics and the freedom struggle at the dinner table. As the granddaughter of the legendary Ghanshyam Das Birla, she had a ringside view to the family empire but from among the diverse businesses in her radar, her heart clearly lay in media. She would often send cuttings from HT to her father, pointing out what the articles missed out on; she would also assess what other papers were writing about and how their own publication could improve the coverage of important events. It was apparent: More than the business side, it was the editorial work that excited her. 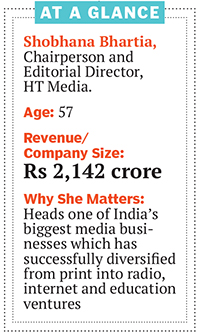 KK Birla noticed this passion early and chose to groom her (from among his three daughters) to lead HT Media. Pushing a daughter into any business was a rarity in the ’80s, especially in a Marwari family. It created ripples in the community, but that never bothered him. Birla knew what Shobhana wanted to do and he encouraged her. “I was interested in public life, I was an avid consumer of news and content, so he decided that since he did not have sons, his daughters would look into his businesses, and this was my area of passion,” Bhartia tells Forbes India during an interview in New Delhi. This is manifest in the number of newspapers arranged on a table in her office—these are a daily ritual, as habitual as the regimented perusal of front page stories before they are sent to press.

Bhartia spent six months each in various departments—circulation, sales, editorial—to get a sense of appreciation of the different cogs of the business wheel she would inherit from her father. After she joined HT Media in 1986, she began steering the newspaper’s focus to governance, infrastructure development in the ’80s and, during the reform process of the ’90s, towards the consumer. As the economy improved, consumerism began making its presence felt; Bhartia monitored the pulse of the reader and modified the content offering to include supplements that tracked developments on travel, food, fashion and lifestyle.

Ask if anything has been lost in the transition from her father’s time to now, and she says: “I don’t think anything has been lost. I think media has become even more competitive now. Because we have many players and multiple mediums, consumers are demanding higher quality and levels of journalism; it also requires higher level of investment, higher aesthetics and production quality.” Back then content was the only focus, she points out.

The hand-over from Birla to Bhartia wasn’t an overnight process, she says. By early 2000, father and daughter would have spent close to a decade working closely together. At that point, Birla had begun to realise the changes in the environment and that the newspaper had to be treated as a consumer product—and that his daughter was best fit to run the show. He was also finally convinced that the newspaper business had to stand on its own and be profitable.

There weren’t any blanket dos and don’ts for Bhartia but Birla often reacted to the changes she was making in the business. However, while they would occasionally disagree on some issues, he would still let her take the final call. “For instance, when we started innovative advertisements, my father was taken aback. He initially said ‘No, we can’t do this. You can’t affect page one, can’t place something in the middle of it,’ ” Bhartia says. “I can understand that his generation was not used to these things. These innovative solutions, for which we asked a premium… he couldn’t understand why we had to do it.” 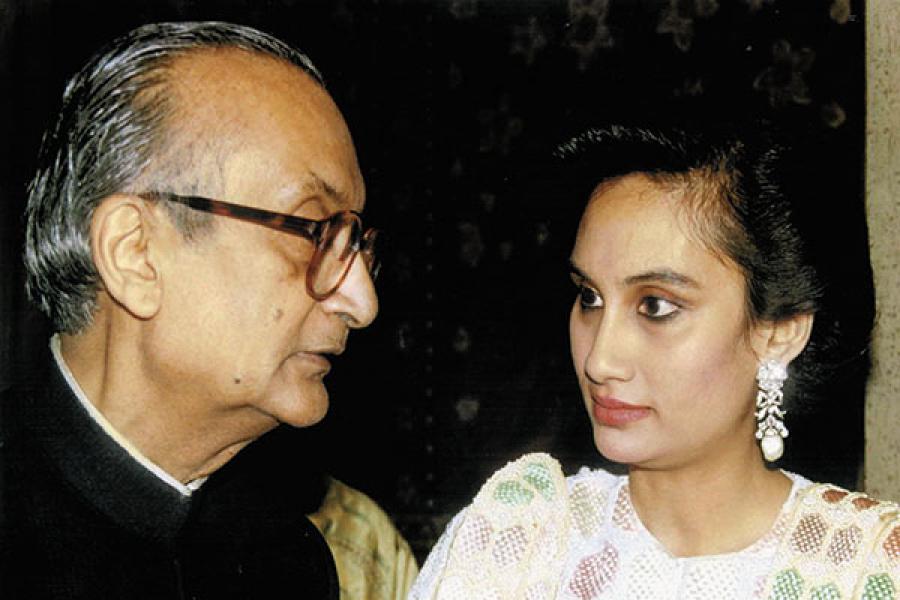 KK Birla with daughter Shobhana Bhartia. For him, HT represented a means to forward the mission for nation-building
Initially, he also didn’t quite comprehend the concept of printing colour pages. “But he took to it very fast,” she says. His reservation was that the brightness might vitiate the seriousness of the paper. “He felt it would be more like a comic book. So yes, there were generational issues, since he was very actively involved in the ’30s and the ’40s when the voice of the paper mattered a lot,” Bhartia points out, recalling the eminent freedom fighters, right from Gandhiji’s son, Devdas Gandhi, who edited HT, to others who would write in pseudonyms because the newspaper was a platform to further the goal of freedom. On the other hand, Birla was a strong proponent of technology and modernised the business according to the latest trends. He also hired professionals and adopted best practices in his fertiliser and sugar business. But the change in the newspaper business—that was tougher for him to handle.

His daughter, however, has assimilated much of his own style in the way she functions. Consider how Bhartia manages complex media businesses along with being a mother, a wife and a daughter-in-law. And she wears these multiple hats more easily having observed her father run various businesses and still carve out time for his family. “He was a stickler for time, punctual and always made a daily plan on tasks, allocating specific time for each of them,” she says, a habit that she has incorporated into her own life.

“Sometimes we felt that he was way too structured. He was too punctual. There was a time when even we, as his kids, had to fix a time when we could meet him. But I appreciate it now,” Bhartia says. He never kept anyone waiting and he would not wait for people. “I learnt the skill of time management from my father and that has helped me cope and perform different roles. I thank him for it now, and also for his eye for detail.”

The model that appeals to Bhartia is a mix of the traditional family-run as well as new-age professional practices. And that is how HT Media has been managed since long. When she was given a free hand to run the company in 2000, she was clear that it had to be a professional who ran the business operations; her job would be to identify talent and create an environment to groom it. Till date, she constantly evaluates how each individual is performing, holding them accountable and making changes when they are unable to meet the mandate. This system continues now that her sons, Priyavrat and Shamit, have joined the board of directors and look after a few of HT Media’s businesses.

“In a competitive market, everyone faces the challenge of getting the requisite quality talent. You have to have some kind of coming together of professionals and owners, work out the dynamics of where professionals can flourish and have the independence, and yet are accountable to the owners,” she says. Her father has always had CEOs in his companies so she understands the value of outside talent.

Stepping back and allowing the CEO to run the show was never a tough transition but the situation required sensitive handling. And now that she has years of experience behind her, Bhartia admits that the promoter has to draw a line somewhere. Daily interference creates friction and innuendo. “It’s very important to first ensure that a bond develops between you and your professionals. Once there is faith and trust and transparency, then there is greater flexibility to ask questions or raise concerns comfortably,” she says.

The hybrid model of management has also taught her that a promoter should never do anything that undermines the position of professionals. “Everyone knows you’re the owner so there is a tendency of people to try and bypass professionals and escalate issues to promoters. This has to be discouraged,” she says. “You have to ensure that you help establish the authority of the professionals you hire. If you can’t do that, then don’t keep them—run the business yourself.”