Anant Goenka is Heralding the Digital Age at The Indian Express

With the entry of Anant Goenka, 27, as head of its digital division, the venerable Indian Express is meeting the new-age head-on 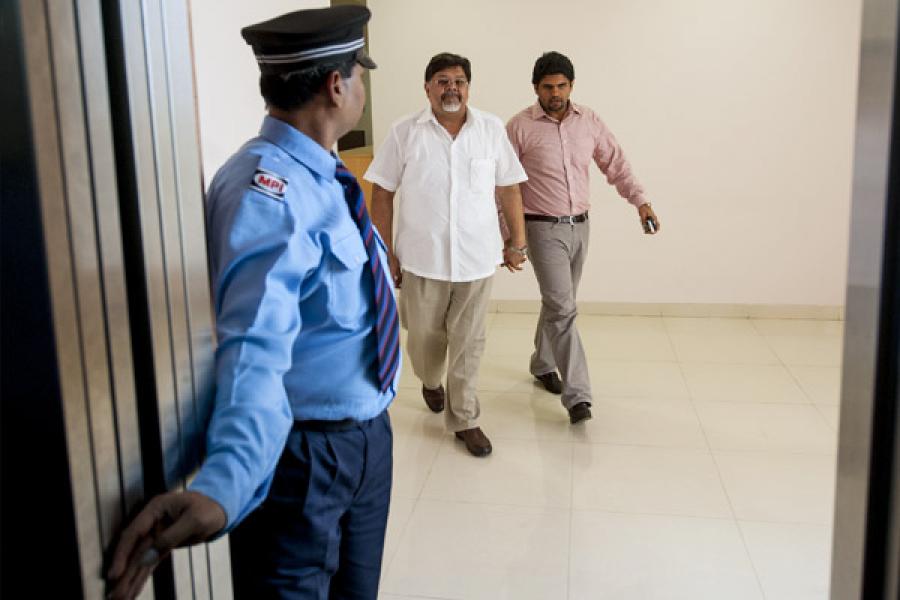 No media business can escape the disruption of the digital wave. Even the Indian Express group is no exception. The man at the vanguard of this change, Anant Goenka, 27, during a conversation with Forbes India at his Express Towers office in Mumbai’s Nariman Point, exudes the energy that he promises to infuse into a ‘serious, venerable’ brand.

“This is a very exciting and challenging phase for me. There is a lot of vigour that youth can add in legacy companies like ours,” says the third generation media honcho. He is confident the digital division, which he heads, is where opportunities lie for exponential growth beyond the group’s traditionally core strength of print. 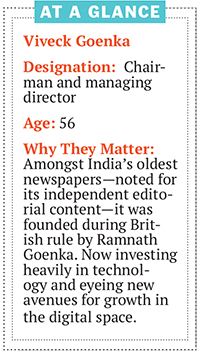 The son of The Express Group chairman Viveck Goenka is the new-age face of a legacy company founded by great-grandfather Ramnath Goenka in the 1930s. But even as he takes the necessary steps into a tech-driven future, his fundamentals are deeply rooted in an old-school yet courageous past.

“You have to work like you have nothing to lose,” he was taught by the group’s iconic founder.

This aspect is underlined by son Viveck Goenka. “Ramnathji taught us never to compromise on editorial values and independence,” he says in a rare chat at his Navi Mumbai office. Dressed in his trademark white shirt and trousers, the chairman of The Express Group tells Forbes India that “Ramnathji taught us to be fearless and not be aligned to any political party”, adding “I have had a whole lot of people threatening me,” since he took charge at the helm of affairs just prior to Ramnath Goenka’s death.

“There was one thing clear about Ramnathji.  If I have an end goal, I don’t care how I reach that… that is the controversy of the man. My end goal is more important,” says 56-year-old Goenka. “I agree with him, but not everyone does.”

He describes Anant as “a bit of an exception”

in the modern generation. “He is earning a lot of respect from the industry. On work ethic, I am pretty tough actually; he has to prove more than what a normal man would have to prove in the company for him to earn respect,” Viveck says. “He has to outshine what we have done, and go beyond that.”

This is the pressure that Anant Goenka returned home to, in 2010 from the US. Armed with the experience of visiting several global newsrooms, an academic internship at Bloomberg and a Master’s degree in print journalism from University of Southern California, he joined the family business with a plan that he hopes will shape an inevitably altered future.

He is convinced that the time is right for Express’s digital business to expand beyond print—into fields of entertainment, radio and “anything a little more youthful”. The motive is not just to tap market demand. “Money is a factor. Everything has to have a financial thing behind it,” Anant points out. “I am not saying I don’t like money.”

This statement may sound odd coming from a Goenka. Consider that Indian Express—founded by Ramnath Goenka on a call from Mahatma Gandhi in the 1930s for a national, English newspaper to unite India in the freedom struggle—has long been respected for its journalism-first, rather than profit-first, ideology.

But there is no dichotomy as far as Anant is concerned. “Truly independent journalism is one that is financially sustainable and growing,” he says.

By the same token, he also acknowledges that they could “make more money, grow more, add more products to our stable if we were a business-first company”. “But we’re a journalism-first news company. There’s no point changing that,” says Anant, adding, “it would be bad business sense to change who we have been for the last 75 years.”

He calls the media business in India one of the “toughest” businesses in the country, and echoes his father when he says, “I have the most to lose and the most to gain from the success of The Indian Express.”

The Indian Express, alongside its best-selling group publication Loksatta, a Marathi daily, has been profitable for the past five years, alongside the B2B division which has a clutch of publications on technology, health care, travel, hospitality and pharmaceutical developments and events.

But the task ahead for The Express Group appears daunting, as rivals like market leader Bennett Coleman & Co Ltd (The Times Group), HT Media Ltd and The Hindu group have forged their own aggressive plans for expansion.

The Indian Express group split into two in the late 1990s, after Ramnath Goenka’s demise. In the division, the northern business operations of Indian Express went to his adopted son and heir Viveck, while the south went to Anant’s uncle Manoj Sonthalia under the New Indian Express brand.
“When I joined Express I was very nervous. Everybody told me that to do well on digital you must focus on the infamous A,B,C,D [astrology, Bollywood, cricket and devotion]. And this is not Express domain for sure. But I think we’ve been able to step out of it a bit,” says Anant, who is hopeful that someday the digital platform will have a paywall.

Indian consumers have been reluctant to pay for digital content. Even in print, most newspapers in India lose money and there is the constant pressure to stay profitable amid uncertain advertising revenues.

Of course, Anant is not the only one thinking digital. Most newspapers across the US and Europe are struggling with sagging advertising revenues, falling profits and circulation with news going more digital over the past three decades.

As with changing business practices, The Express Group has had a professional corporate structure to run their publications. “The earlier baniya system of having an office below your residence, the cash under your gadda (seat)—these were excellent cash-flow management systems,” says Anant. “Today, modern practices demand we look at top line and market cap a little more than we did before; this means more autonomy and investment in people than traditional managements used to have.”

George Varghese, a former employee, returned to take charge as CEO at The Express Group five months ago. Anant credits Varghese for teaching him “how to build teams”. “My first boss Maneck Davar [head at Spenta Multimedia, where Anant worked briefly] taught me to have a healthy affection and disdain for money,” he says, joking that “everything else I am today is a little bit because of, and a little bit in spite of, my parents”.

He believes that as a Marwari, he has an “inherent drive to spend wisely and to build wealth”. While working and staying out of Delhi for 10 days each month, Anant would run up hefty hotel bills. He was not comfortable with the costs and bought a 2,500 sq ft ‘bachelor pad’ instead. “Whether large or small, [the flat] is our own. It’s a Marwari thing. We are obsessed with appreciation,” says Anant.

Meanwhile, father Viveck, who grew up in Tamil Nadu, offers a completely counter view, saying he does not even see himself as a Marwari. “I see myself as a proper Tamilian Brahmin, that’s my upbringing,” he says, as he poses for the Forbes India camera—a first in years.

Tweets by @forbesindia
Shobhana Bhartia: Inheriting, and Transforming HT Media
At The Zee Group, Son Punit Has Taken the Baton From Subhash Chandra