At The Zee Group, Son Punit Has Taken the Baton From Subhash Chandra

Following in Subhash Chandra's enterprising footsteps will not be easy, but Punit Goenka seems to have learned enough from his father to lead Zee TV in the right direction 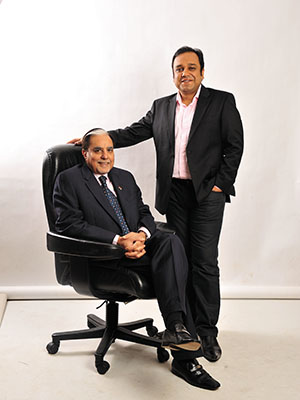 Start, scale up, hand it over, start another one: That is a one-line descriptor for Subhash Chandra, head of the $2.5 billion Essel Group. Never afraid to grow new businesses from scratch, he is apparently itching for a new project now, at the age of 63.

This shouldn’t be a surprise. From trading goods, erecting telephone poles, setting up a packaging industry to opening up theme parks and multiplexes, and creating one of the most profitable TV media groups as well as launching an English newspaper, Chandra has identified opportunities and jumped right in. You could say he is always in the build mode. Once he sets up a business, he typically hands it over to a family member to run it.

He entered the media business—making it one of the biggest Indian media empires in just two decades—later than other Marwaris; it is now being managed by son Punit Goenka.

It was an unexpected move from Chandra, when he decided to set up India’s first satellite TV by launching Zee TV in 1992; even his entry into print media was surprising. In 2005, he joined hands with another Marwari-owned newspaper empire—the Dainik Bhaskar group—to start DNA, an English daily meant to challenge Times of India in their home turf, Mumbai.

The launch of DNA in Mumbai is now well-documented. It was a full-frontal assault on Bennett Coleman’s largest selling edition (Mumbai), and one of the biggest newspaper battles India has seen. Although DNA made losses for many years and the Bhaskar group eventually pulled out, Chandra continues to run the show and is personally involved in the turnaround process.

From grain merchant to TV mogul
The empire he has built started with a mere Rs 17—that was all he had in the early ’70s when he took up the reins, along with his family debt. He began a trading business by picking up goods in Hisar (Haryana) and selling them in Delhi. Though he was born in Rajasthan, his family had moved to Hisar during his childhood.

By trading in grain and working extensively with Food Corporation of India, Chandra realised the inability of storage facilities to handle surplus grain during the Green Revolution in India. Chandra bought machines from Switzerland to make laminated plastic sheets to protect the grain. “We didn’t even have engineers to run those machines and the first production in 1983 was 98 percent scrap. Dad sent engineers to Switzerland to train them and, eventually, in a few years, we reversed the situation to 95 percent quality production,” says Goenka.

Goenka recalls a family trip to Disneyland in 1986, from which Chandra returned impressed by the theme parks business and decided to start one on a piece of land he owned in Gorai, on the outskirts of Mumbai. He knew nothing about the business and all his research showed that he needed a million visitors in the first year itself to make it viable. But he went ahead anyway and Esselworld was born. Inevitably, he got only one third of the number in the first year of operations in 1989.

Instead of getting defeated, Chandra drew upon the experience of realising that Indians were not willing to travel long distances for entertainment, given the lack of infrastructure and poor roads. How could he take entertainment to people’s homes, he wondered?

It was around the time, in 1990-91, that cable TV had become the buzzword. Chandra heard of a gentleman named Richard Li who owned AsiaSat in Hong Kong. He met Li and expressed his desire to hire a transponder to launch his own TV channel in India. He had tried to get a slot with Doordarshan and hire a transponder from them but had failed. People at AsiaSat laughed at him, questioning his credentials and lack of experience in running a satellite business.

Then, Chandra made them an offer they couldn’t refuse: He paid $5 million for a transponder that was selling for $1 million. “Yes, it was an outrageous figure, and not just them but everyone in India including the community [Marwari] were laughing at Dad, saying he will destroy everything he has created so far,” says Goenka. Chandra didn’t even have the money when he made the offer; he eventually raised it from friends, and proved his detractors wrong when Zee TV launched in 1992 and became a huge success.

Money Matters
What separates Zee from other media companies is its grip on cost and focus on profits. Although they don’t religiously follow the traditional parta system of accounting like some other Marwari businessmen, its essence is still seen in Essel Group’s  accounting methods. They track financial reports and sales on a daily basis and, for them, the return on capital employed is critical. “I see daily inventory sales numbers because ours is a perishable commodity. My inventory cannot be stored. That’s why even if media players are bleeding elsewhere, we are one of the few who make the top end of margins in the world,” says Goenka. A 24 to 26 percent margin is healthy—even the best of media companies in India can’t boast of this.

“It is clear that we are in the business to make money; we are not here for charity or for building power or influence. My father also taught us that this company is not just ours—we only own part of it. We have minority shareholders whose interests are equally important,” Goenka says.

Family Ties
A traditional Marwari businessman will always keep his word, Goenka insists, a core value practiced by his father too. “No signed document is as important as our commitment. And commit only what you believe you can deliver. When we had debts, my father had no money to trade. People gave us goods only on our word,” says Goenka. “If you do a bad deal, you have to go through with it, honour it.”

Family feuds and splits are de rigueur in big business families. Not so much though in this community, he says. It could be an emotional bond or just a clear structure that large Marwari business families maintain to help avoid scuffles. Chandra, for instance, is aware of the practical issues that can wreck the $2.5 billion Essel Group that has been built by him, his three brothers and their children. To that end, he, along with his brothers, demarcated the businesses for each one. These are run independently, while a family council and a board governs them all. He likes to call it the ‘perforated sheet of paper approach’. “If any brother wants to move on and turn independent, he can take his piece of paper and go.”

Passing The Baton
With the new generation stepping in over the last decade, Chandra has now set bigger goals for the next generation. For the Zee TV division, the job is to become one of the top 10 media companies in the world by 2020. This means repeating the achievement of the last 20 years in the next eight. “I don’t think of the vision—I let it come from him. Because if he has proved himself for the last 40 years, who am I to question that vision?” says Goenka.

Following in Chandra’s footsteps won’t be easy for the next generation. And they know it. But there have been times when even Chandra has had to learn to let go in an attempt to let them learn and take over. Goenka recalls that the toughest moments for him were the initial days of handling Zee. It took him months to approach his father to allow him to take all the decisions for this business.

“I had to ask him to let me run the business independently and give me the required space.” It wasn’t easy to say that, Goenka explains, especially to someone who has achieved so much. Punit consulted his brother and uncles before he had a chat with his father.

Today, he is the managing director of ZEEL, clocking Rs 3,500 crore in revenue and substantially increasing the channels’ market share. But he nurtures a secret desire, one he hasn’t articulated even to his father. “Someday I want people to point to Subhashji and say, ‘That’s Punit Goenka’s father’. That’s my only goal in life. I want that recognition once.”

Tweets by @forbesindia
Anant Goenka is Heralding the Digital Age at The Indian Express
Indian Media: Marwaris Write the Script