As he prepares to move to parent company Landmark Group, Kabir Lumba talks about how he grew Lifestyle into one of the largest department stores in India 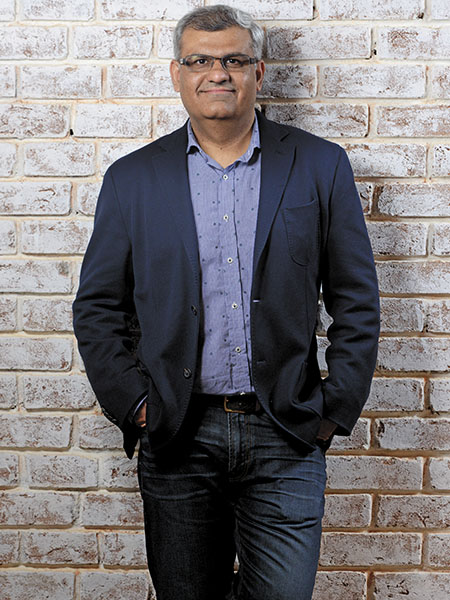 Kabir Lumba has been managing director of Lifestyle International Pvt Ltd since 2009 and moves to the parent company in May
I joined the Landmark Group in 2004 and almost immediately noticed the culture difference. I had worked in what were then larger companies–Pantaloons and Proline. At the time, Lifestyle was a lot smaller and I believed that the retail opportunity was huge. Most importantly, the Landmark Group had run retail operations overseas and knew it was a business that required tremendous patience.

For what was then a ₹200-300 crore business, I felt we were working too hard. People in office were regularly putting in 12-14 hours a day. According to me, we needed to make it a more fun place to work. And I set about doing that.

Among the decisions I took was to move the office from Chennai to Bengaluru. We had our office in Chennai because we had opened our first store there in 1999, but as the company grew nationally, I saw no reason for being headquartered there. The decision was taken in 15 minutes while I was in a car with Renuka Jagtiani, chairwoman and CEO of Landmark Group. The hidden motive was that it was easier to hire talent in Bengaluru and that the city has a younger vibe to it. The decision paid off as we could grow our operations and hired some of the best people in the industry.

As we set about opening new stores, we started leasing real estate. In the run-up to the 2008 Indian credit crisis, the Indian economy boomed; so did we. During this period, our competitors–which included large business groups like the Tatas and Reliance–were expanding at a furious pace and retail was touted as the next big thing. At the cost of sounding immodest, we have managed to scale better than our rivals. 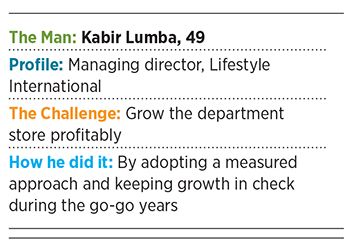 My first big test came during the credit crisis. Almost overnight, sales fell and we had to go back to startup mode and re-evaluate our value proposition. Possibly the best decision we took was to stay the course. We didn’t scale back expansion plans, didn’t part ways with suppliers and did not resort to heavy discounting. We ensured our growth was calibrated. We always wanted to target 25-30 percent growth instead of growing at 50 percent in a good year and falling flat in a bad year. Even today, we use this as a key learning.

Our same store sales rose by 19 percent in the two years after the crisis. Lifestyle International Pvt Ltd has grown at a 27 percent CAGR over the last five years taking its topline to 8,000 crore in sales and has a healthy Ebitda and no debt.

One of the lasting legacies of the crisis is that the industry has had to resort to heavier and longer discounting. Part of this has been necessitated by the rise of online, but part of it also has to do with fiercer competition. Before the financial crisis, the industry would get as many as 44 weeks of full price sales with the balance spread across two sale seasons starting around New Year and Independence Day. The sale season now extends longer and starts earlier. As a result, full price sales have gone down to 40 weeks.

Over the years, the terms of trade with our brands haven’t changed much except with our mall partners. Instead of playing a flat rental, the industry has more or less moved towards a revenue share model.

With our merchandise partners, we buy as a consignment while for others, we pay later. And while we have final control over pricing, we make sure we always work with brands to make sure we don’t cheapen their value proposition. It is best not to be seen as a discount store, both for us and for the brands. Still, there is a lot of pressure during sales, sometimes from the mall owners and sometimes from rivals who might start sales earlier. One thing we have consciously avoided is making our ecommerce site a discount site. Prices there mirror those at our stores.

“ We always wanted to target 25-30% growth instead of growing at 50% in a good year and falling flat in a bad year.

As India gets richer, consumers are beginning to spend more on discretionary purchases and the average bill for a Lifestyle customer is now approximately ₹3,000. This has been rising at 5-6 percent a year–part of which has been due to price hikes and increasing volumes. It has prompted us to venture into smaller cities in India. Lifestyle, which now has 68 stores, is present in places as diverse as Siliguri and Bareilly.

The increased spending power has also allowed us to scale up Home Centre. Here, we have noticed global tastes don’t necessarily work and retailers would do better to work on Indian designs. While in fashion we track global trends, buyers here have more traditional tastes when it comes to their homes. They prefer printed bedsheets as opposed to the plain sheets and pastel colours seen overseas. We have worked at understanding what the Indian customer wants and scaled up to 35 stores with a sales growth at a CAGR of 25 percent over the last four years.

In the furniture category, we have been able to take advantage of global supply chains and pass on those benefits in terms of cost savings to customers. Margins in the category continue to be robust and under lesser pressure as online hasn’t made a major dent here.

As Lifestyle prepares for the next leg of growth in India, I believe we’ve laid strong foundations. While talent is a big issue for the industry, we’ve managed to keep our attrition levels in check. At 8 percent, it’s the lowest in the industry. We’ve also managed to increase the productivity levels of our stores. From about ₹8,000 per sq ft in 2012, they are now at ₹14,000 per sq ft. This is the ultimate test of whether a retailer is on the right path and a key determinant of long-term success.